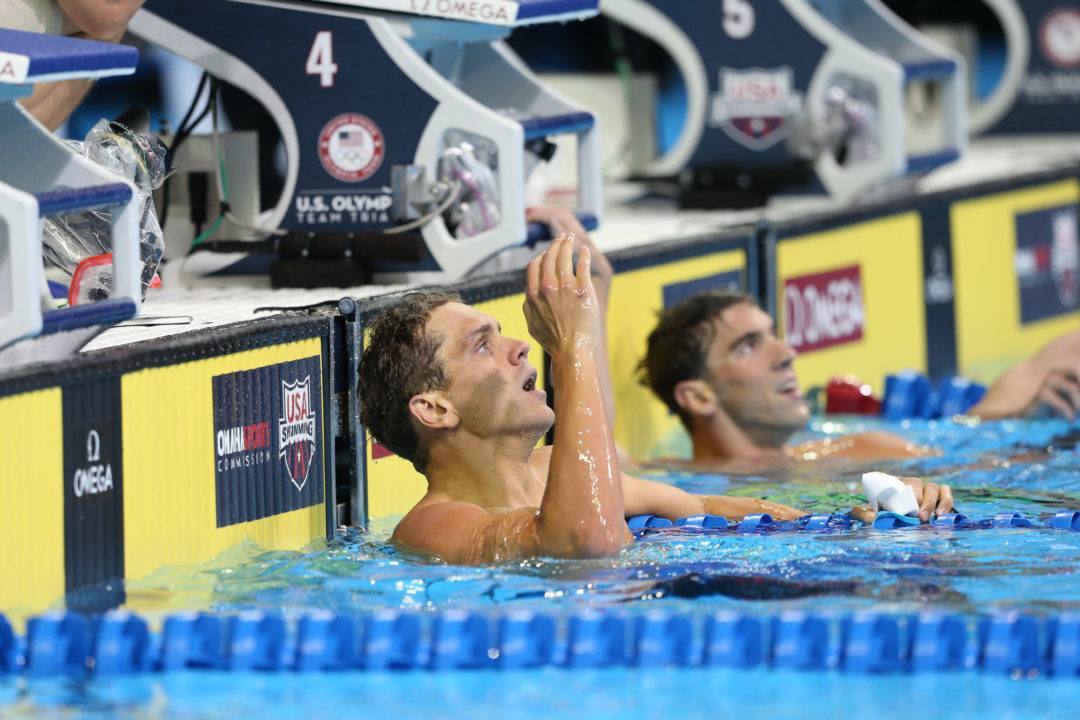 On night 3 of the 2016 U.S. Winter Nationals, U.S. Olympian Tom Shields made history with the first ever sub-44 time in the 100 yard butterfly. Archive photo via Tim Binning/TheSwimPictures.com

With the 2016 U.S. Winter Nationals now complete, the winning teams in the points battles have been named.

On night 3 of the 2016 U.S. Winter Nationals, U.S. Olympian Tom Shields made history with the first ever sub-44 time in the 100 yard butterfly. Shields crushed the field, winning the race in a new American and U.S. Open Record time of 43.84. With that swim, Shields is now the fastest 100 yard butterflier of all time, surpassing Singapore’s Olympic champion Joseph Schooling.

Check out the video of the race below, courtesy of USA Swimming’s YouTube channel.

At last season’s NCAAs, Schooling narrowly missed becoming the first man under 44 seconds with his 44.01, but Shields has now secured that title for himself. Shields had been sitting 6th on the all time top performers list coming into today with a 44.59 from 2013. Before Shields lowered the record tonight, the previous American Record was a 44.18 done by Stanford’s Austin Staab in 2009. He also took down his own Championship Record, which he’d set at 44.88 at the 2012 U.S. Winter Nationals.

In addition to his incredibly fast 100 fly, Shields also swam the fastest flat start 50 fly ever. Read more about that race here.

My only compaint as a technical coach is how difficult it is to find splits for this and other short course races. Even USA Swimming doesn’t seem to post short course splits. Swimming World doesn’t include them in their records posted either. I’m trying to teach and design tools for the next generation to split well, set goals, etc. I encourage SwimSwam to post splits. Otherwise this is awesome. Thanks! 🙂

I think it’s funny that Shields couldn’t get it done when it mattered. At the Olympics

2 minutes in and you can get a better idea of what went down… Just curious how your Olympic career panned out, throwing stones and all…

Gonna be a great duel between Tom and Chad. Go Tom!!!

Wonderful race. Highlighted by Rowdy’s spending the first half of the race talking about Matt Biondi and Cal swimming history.

I am always impressed by rowdy gaines insight. He is extremely knowledgeable and intelligent. Don’t be so quick to throw him away.

This record will stand until March and then the Olympic Champ will take it down.

I hope so. But it seems like schooling is golfing and in Singapore more than in the pool if you look at his Instagram. But we’ll see I think jack is hungry for his own glory he’s already a 44.8 not tapered. So March will be fast.

This race looked similar to Ryan Hofer’s 41+ 100 free with the dominant underwaters.

So… 0.4 slower than Tom? Looking forward to SC worlds

9
0
Reply
He Gets It Done Again