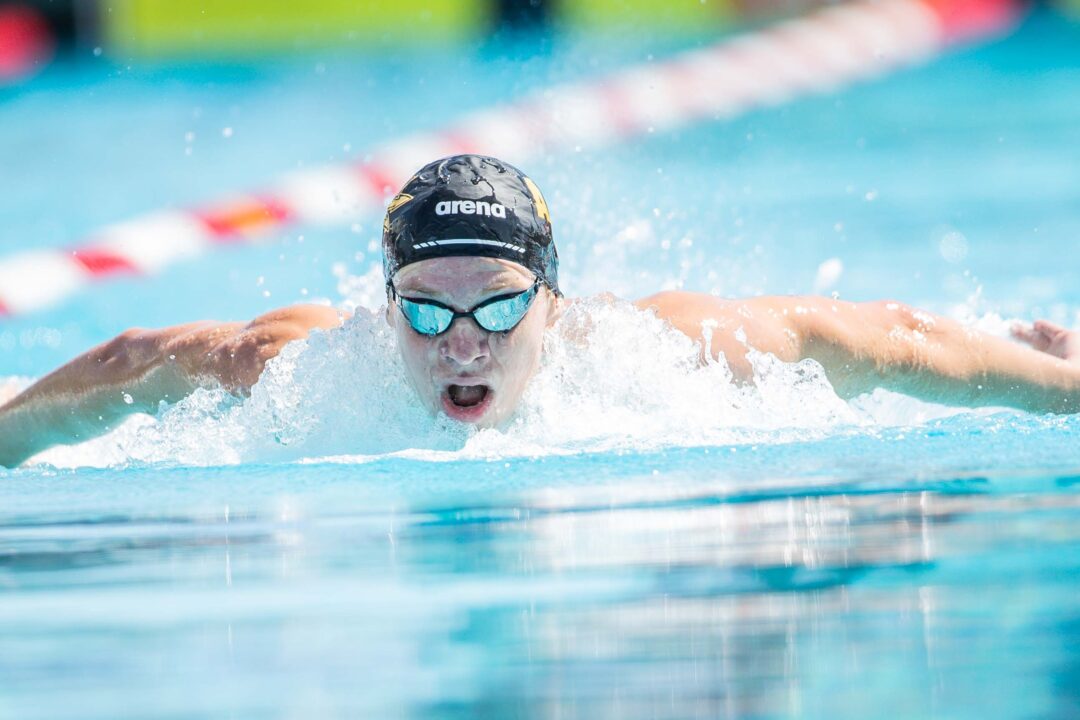 Marchand swam a time that was faster than the Olympic-gold winning time last year, and takes the top seed in the 400 IM headed into finals. Archive photo via Jack Spitser/Spitser Photography

Leon Marchand got his World Championships off to a strong start, clocking a time of 4:09.09 in the prelims of the 400 IM. With this swim, he breaks his old French record of 4:09.65 from the French Championships last year, and sets a new best time by 0.56 seconds. In addition, this time is also faster than Chase Kalisz‘s mark of 4:09.42 that won Olympic gold last year.

Headed into finals, Marchand has the fastest time from prelims and will take the top seed. If he is able to match this time later, he will have a good shot at the gold medal.

Marchand’s performance also makes him the third-fastest European performer of all-time in the 400 IM, just behind Hungarians Laszlo Cseh and David Verraszto.

Compared to his previous record, Marchand went over a second faster on his butterfly and over three seconds faster on his backstroke. However, his back half this time around was much slower than it was last year, being slower on breaststroke and and freestyle by a significant margin. This either signifies a change in race strategy, or more likely that Marchand was holding back and has more in the tank for finals.

ALLEZ LES BLEUS! About time we had another frenchman who could medal

If you add up his front half from this morning and his back half from a year ago, it gives a 4:06.4. I don’t know if he was holding back that second half but if he was we might see a very strong time from the frenchman.

Well, maybe wait until tonight to put Carson and Chase to sleep?

Very strong swim from Leon, he will be fun to watch the next few years for sure

I’m voting that Marchand backed off when he found himself well out in front of his heat. The article makes it sound as though he is not a strong breaststroker / Freestyler. Not exactly accurate.

He won the NCAA 200 Breaststroke in a time making him the 2nd fastest performer in history; and a week later he won the San Antonio – TYR Pro Swim Series in 2:09.21, beating Nic Fink by over 2 seconds. He also had arguably the most impressive set of freestyle relay legs in the history of the sport for Arizona State this spring with an :18.41 rolling start on the third leg of the 4×50 Free, :41.17 anchoring 4×100 Medley Relay and 1:29.96 anchoring… Read more »

Where did I signify he was bad at breast and free?

Very reminiscent of when Phelps went 4:09.09 as an 18 year old. And both are coached by Bowman… I’m not saying that Marchand is the next Phelps, but he can take down 4:03.84 someday.

I will be French for the 400 IM final tonight. Vive la France!