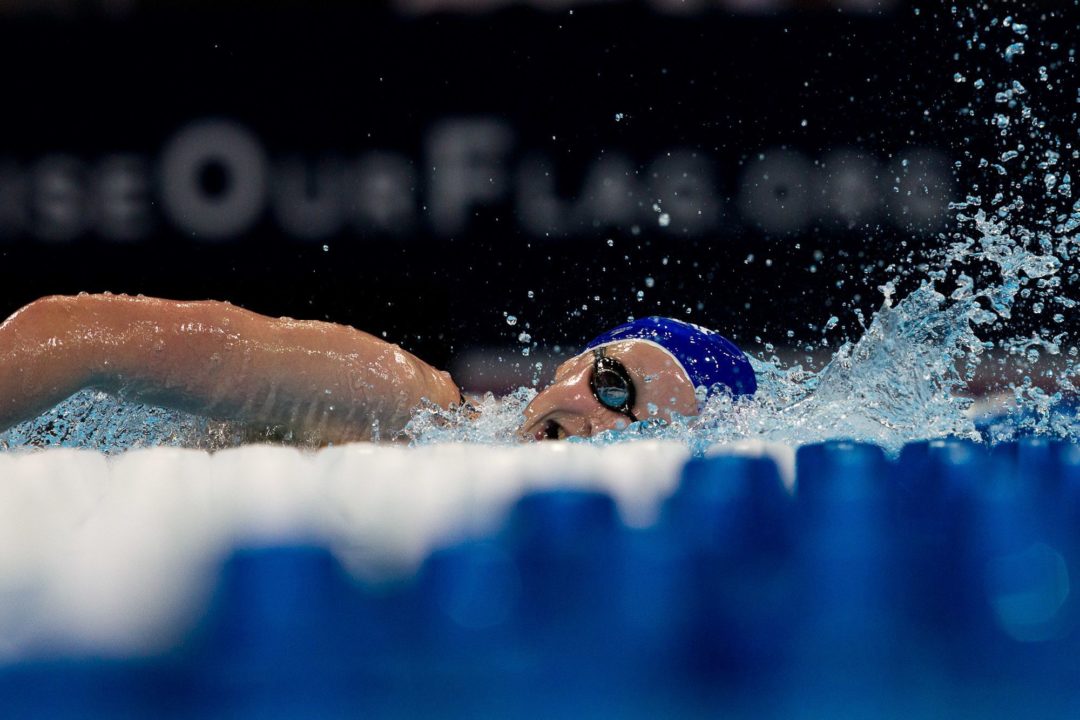 Nobody even sniffed Katie Ledecky in the 800 free as she closed the meet with a world-leading 8:20. (File Photo from Olympic Trials: Tim Binning/TheSwimPictures.com)

At both the 2011 and 2012 NCAA Championships, Katinka Hosszu took the NCAA titles in the 200 fly with Cammile Adams chasing. Hosszu is graduated for just over a year now, which left Adams to win last year’s NCAA Championship, and with another head-to-head opportunity, the script was flipped.

Adams took the race out very hard, turning in 1:02.63, and though she got a good push from Hosszu and 15-year old Katie McLaughlin, Adams still had enough to hang on for the win in 2:09.45.

Hosszu and Adams are two of the most back-half-leaning swimmers in the world in this race, and Hosszu actually made up ground on Adams in that last 50, though the two were easily better than anyone else. That includes Hosszu running down McLaughlin in the final 15 or so meters of the race for 2nd. McLaughlin was 3rd in 2:10.86; that’s about half-a-second off of the Mission Viejo swimmer’s lifetime best, but still only three women in the last decade have been faster at this age.

Cal’s Caitlin Leverenz was 4th in 2:13.49. This is a race that the IM’er really made huge improvements in after NCAA’s last year, not so much with any intent on trying to swim it at Worlds but as a training event for her IM races.

Tyler Clary, like we’ve seen from a lot of the other swimmers taking on big schedules at this meet, has done a really good job of conserving energy in morning sessions and using these finals swims to really practice on their tough doubles. That’s why despite being only third in the morning, he took this race out hard early (“like a man” in his words) and won wire-to-wire in 1:58.10.

Clary said in his post-race interview that the 200 IM probably wasn’t in his end-of-season plans, despite a spot opening up with Phelps’ retirement.

The only swimmer who really hung with him was Bolles High School junior Joseph Schooling, who was 2nd in 1:58.83 and had the benefit of swimming next to Clary. Schooling was a 2012 Olympian for Singapore in this 200 fly; though in yards, he’s the National High School Record holder in the 100, this 200 is his better race internationally-speaking.

In the B-Final, notably 14-year old Maxime Rooney of the Pleasanton Seahawks took 2nd in 2:04.27. That’s a second off of his previous lifetime best, and improves his hold on the 5th-place spot on the all-time 13-14 age group list.

In a battle of underwater-titans, Texas A&M’s Breeja Larson and South Florida Aquatics’ Alia Atkinson went toe-to-toe in this race. Larson would say after the race that her goal was to go out faster, and though she did that a little bit, the big difference in this final was her back half. Coming off of the turn, Larson just blew past Atkinson (also a former NCAA Champion for the Aggies). That shows just how deadly Larson’s turns can be even in long course, because Atkinson (the 4th-place finisher at the Olympics) has had one of, if not the best, pullouts in the world for the last few years.

Jessica Hardy scratched the final, so those two were pretty comfortably ahead of the rest of the field, with Swedish swimmer Rebecca Ejdervik taking 3rd in 1:09.28. SMU’s Rachel Nicol was 4th in 1:09.88, and Catherine Meili from Columbia (University), who had such a big college season, placed 5th in 1:09.98.

T2 Aquatics’ Erika Erndl, who even at 34 years old continues to find new ways to improve her versatility and expand her repertoire, was a 1:11.64 for 10th overall.

Mike Alexandrov had a solid Olympic Trials last year, but in finals couldn’t make the final jump and placed 6th overall. This year, there’s a big, big opening for spots in the 100 breaststroke on the World Championship team, and Alexandrov was using this meet as a bench-mark for where he is.

The answer is that he’s in a very good spot. He won the men’s 100 breaststroke in 1:00.63, which was about three-tenths better than he was at the last stop in Orlando, and better than he was at the Olympic Trials as well. Alexandrov said after his race that he took about a week to rest coming into this meet, and even with that taken into account this is a very good swim for him.

Grand Canyon University’s Eetu Karvonen, a Finnish national and two-time NCAA Division II Champion in the sprint breaststroke, took 2nd in 1:01.97, which is a lifetime best.

Imri Ganiel, an Israeli international, won the B-Final in 1:02.41. He’s been training with Eddie Reese and the Texas Longhorns for a while now, but will begin his official collegiate competition next year and will help to fill the Longhorns’ big breaststroke hole.

Teri McKeever has to be absolutely salivating at the prospects of her backstroke group coming up. Not that this is a new story, but between her current freshmen, and her next-year freshman, the Golden Bears went 1-2-3 in the women’s 100 backstroke final.

That was led by Missy Franklin in 1:00.15, and followed by her Olympic counterpart Rachel Bootsma in 1:00.54 and Liz Pelton in 1:00.84. Franklin, who is still training with Todd Schmitz and the Colorado Stars, is probably at a much different spot in her training than Bootsma and Pelton (who are just coming off of their NCAA Championship meet).

Clara Smiddy won the B-Final in 1:02.41; along with her brother Sam, the Smiddy siblings have had an outstanding meet so far.

When asked what the key was to winning the men’s 100 backstroke. Matt Grevers’ answer was simple: “being 6’8″”. After a back-and-forth battle with Minnetonka’s David Plummer, the Olympic champion just got his hand on the wall first in 54.26, with Plummer taking 2nd in 54.28.

Plummer is by no means short, but Grevers’ 5 inch height advantage paid off at this finish.

Stanford post-grad Eugene Godsoe was 3rd in 54.77, and Bolles’ Ryan Murphy (a Cal commit) took 4th in 54.81. Murphy is more than a decade younger than Grevers and Plummer.

Matas Andriekus, a Lithuanian who trains with SMU, was 5th in 55.84. That’s another top-5 finish for the Mustangs.

Also of note, Redlands Swim Team 16-year old Kyle Gornay took 10th in 57.39. Ryan Lochte was 6th in prelims of this race, but scratched the final to focus on the 200 IM.

Hungarian Katinka Hosszu has had a great meet, and in this, the last race of 8 (she ended up scratching the 800 free), she may have had her best. She had a great breaststroke leg, to match that of former training partner Stina Gardell, and won in 2:12.68. That’s the fastest that she’s been this early in a long course season in her career (which makes sense because it’s her first chance at not coming right off of NCAA’s).

Hosszu will finish the meet with four runner-up finishes, two victories, a 6th-place finish, and an 8th place finish.

Gardell finished 2nd in 2:13.81, and Caitlin Leverenz was 3rd in 2:13.90. Leverenz had a typically-great breaststroke leg to get back into this race, but couldn’t hold that position on the freestyle leg.

Karlee Bispo of Longhorn Aquatics won the B-Final in 2:16.91, pulling away from Alia Atkinson (2:16.91). Bispo looked very smooth on the closing freestyle leg next to Atkinson’s relatively labored freestyle stroke coming home. After a 2:12 at the Austin Grand Prix earlier this year, Bispo should at least final at Nationals this summer, and could challenge for a spot in Barcelona in the 200 IM.

Ryan Lochte and Darian Townsend were locked nose-to-nose in a battle in this men’s 200 IM final, taking every stroke and every turn at almost identical splits.

If there’s an IM’er in the world that you don’t want to be locked even with in a 200 IM, though, it’s Darian Townsend. The veteran from South Africa took off on the closing freestyle leg to win over Lochte by about half-a-second, splitting 28.36 en route to a 2:01.04 victory. Lochte finished 2nd in 2:01.90.

Like Hosszu, Townsend seems to be benefiting from a big run at the World Cup in the fall.

See also: Ryan Lochte’s reveals plans for after the World Championships this summer, and it involves a big move.

That halfway split was faster than any woman aside from her was in the individual 400 freestyle event.

The biggest question for Ledecky fans to wonder about this summer is how effectively she’ll go either up (1500) or down (400 and 200) this summer and challenge for medals in those races.

Looking objectively, that’s the fastest time in the world so far this year in the event by three seconds. Perhaps someone like Lotte Friis from Denmark or Lauren Boyle from New Zealand, who have both been swimming very well, could catch her. Maybe France’s Camille Muffat if she really focused on it would have a chance. But the smart money between now and Rio is all on Ledecky.

If any local Shakespeare companies are looking for a young Queen Elizabeth the Ist , Katie is your gal. Elizabeth was not much olde when she took the throne.

Keep your petty personal insults to yourself.

What is insulting about that comparison ?

D o you think Cate Blanchett was insulted to be cast as Elizabeth One.

Yep – every British actress of all ages was clamouring for that role. The alabaster skin cannot be replicated – especially the t,one that goes with a slight red .

Philip does not know his history – that Henry the Eighth ditched the pope & obliterated the Catholic Church in England so as to marry Elizabeth’s mother who can’t have been half bad .

It changed the world.

My mistake – Liz had to wait around till a few others on the throne popped off & was 25 whilst avoiding the head choppers .Victoria was 17 .

I would prefer for this year the 400 free, the 800 free, the 1500 free and the 4X200 free relay. I think it’s a little too early for the 200 free. I have predicted 1.55 for her next summer but although she has already much improved, she hasn’t enough speed yet to play with Allison Schmitt and Camille Muffat. She could win 3 individual gold medals in Barcelona like Sun Yang. It’s a good place to do this tough freestyle triple. The last time a swimmer has done this triple, it was in 2003 in…Barcelona. It was Hannah Stockbauer. And this year 2 swimmers can do it. Predictable for Sun Yang. Harder for Miss Ledecky with Camille Muffat in the… Read more »