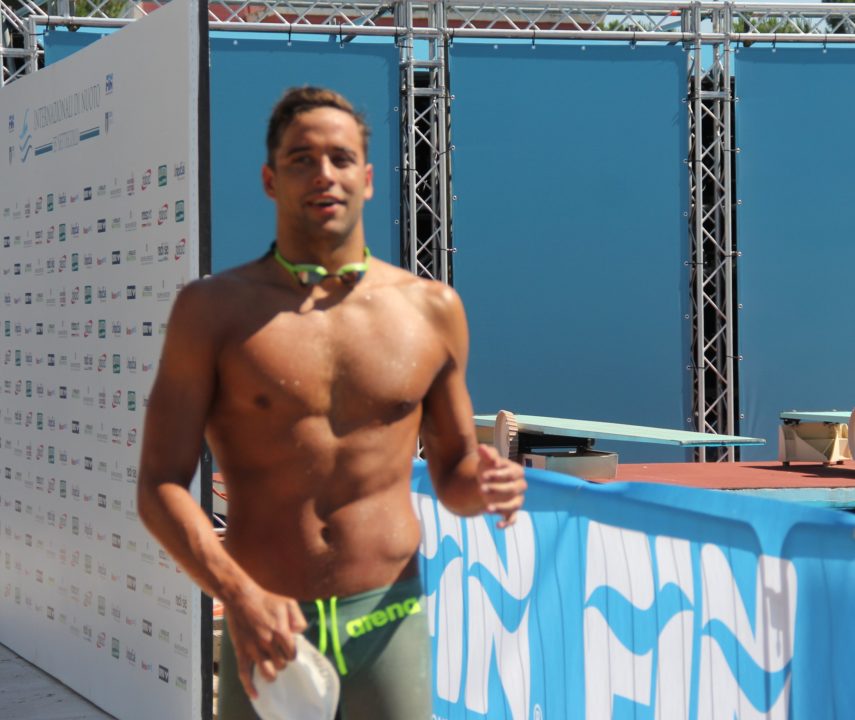 The 26-year-old first clocked a winning mark of 1:56.21 in the 200m fly, his 2nd fastest of the season, to dip under the 1:56.71 QT needed for Gwangju. Le Clos has been slightly faster this year with the 1:56.09 he put up a couple weekends ago at the FFN Golden Tour Camille Muffat in Marseille.

Le Clos’ time in the 100m free was modest, by his standards, checking in at 49.75. The multi-Olympian’s time, however, did not clear the World Championships QT of 48.80.

Ryan Coetzee was the only other sub-50 second racer of the field, clocking 49.84 for silver, while Zane Waddell took bronze in 50.28.

The women’s edition of the 100m free did see a World Championships qualifier, as 20-year-old Commonwealth Games finalist Erin Gallagher took gold in a time of 54.34. That beat out the minimum selection time of 54.49 and added the young starlet’s name to the South African roster for Gwangju.

Gallagher holds the South African National Record and African Continental Record with the 54.23 she produced on the Gold Coast, so she was just .26 off of her lifetime best tonight in Durban.

South African Junior Nationals multiple gold medalist Dune Coetzee came within striking distance of the QT in the women’s 200m fly, clocking 2:10.89 when a 2:09.21 was needed. She was the only woman of the field to dip under 2:16, so she was essentially on her own in chasing the Gwangju time standard. She’ll still have the 100m fly and 200m free to try.

Tonight’s performance is a big-time personal best for the 16-year-old however. It beats out the 2:11.71 she put up last year for silver in the event at the 2018 Youth Olympic Games.

what are the chances of a SA 4X1 men’s relay making the cut?

Meet mobile doesn’t have the right splits for the lead offs
Only 2 men at the meet were under 50. Seems pretty average. How are they so far behind as a country? They used to have a good group of 100 guys.
Tandy 51.2. For a guy that goes 21.7 you’ve got to wonder what he’s doing