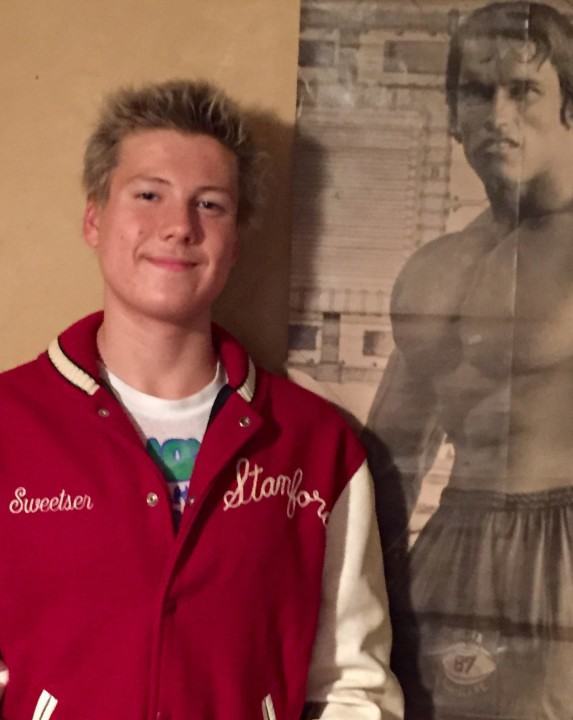 Nicholas “True” Sweetser (shown here with his idol, a young Arnold Schwarzenegger), number 4 on SwimSwam’s top 20 list for the high school class of 2016, and the last to announce his intention, has made a verbal commitment to Stanford University for 2016-17. Current photo via True Sweetser

“I enjoyed all of my visits and could have envisioned myself attending a number of schools, but Stanford, with its unmatched combination of academic and swimming prowess, is the best choice for me. Fear the Tree!”

Nicholas “True” Sweetser, number 4 on SwimSwam’s top 20 list for the high school class of 2016, has announced his verbal commitment to Stanford University for 2016-17. Sweetser is one of the top distance swimmers in the country, with Olympic Trials cuts in the 1500m free, 400m free, and 200m free.

Sweetser swims for Gator Swim Club and is a member of the USA Swimming National Team. Sweetser tends to excel even more at the longer end of the range. He secured his spot on the National Team following a second-place finish in the 1500m free at U.S. Nationals in San Antonio this past summer. He also placed fifth in the 400 free and 19th in the 200 free. Similarly, at 2014 Winter Nationals, the seventeen-year-old came in third in the 1650, fourth in the 500, and 18th in the 200 free. His best times are:

Stanford has had a monstrously successful recruiting year; Sweetser will join fellow commits Benjamin Ho, Grant Shoults, Hank Poppe, James Murphy, Will Macmillan. Of that list, what is most striking is that Sweetser and Shoults, arguably the two top distance swimmers in the country, will be training partners for the next four years. That bodes very well for the Cardinal men’s program, which hasn’t won a Pac-12 title or placed in the top 5 at NCAAs since 2012.

Sweetser is an excellent pick-up for the Cardinal, and all the more so given the complementarity with Shoults, who is faster at the slightly shorter end of the range (200 free, 500/400, and 200 IM, as well as 100/200 fly). The two are about even at the 500/400 range (Sweetser is about a second behind Shoults in both events) but the Floridian takes over from there and is 25 seconds faster than the Californian in the 1650.

Sweetser has the potential to add immediate points to the Cardinal tally at his first NCAAs; his best 1650 time would have placed tenth at the 2015 Division I meet, while his 500 time swum in prelims would have made him second alternate, just .36 away from the B-final cutoff.

Congratulations True – Don’t forget to pack your sunblock!
I look forward to watching you get faster!

The no chill savage strikes again

Just
Outstanding
He is
Now a
Cardinal!!!
Exciting
New opportunities
Await him!

Just
Outstanding that
He is
Now a
Cardinal!!!
Exciting
New opportunities
Await him!!!

This is a big pick up for the cardinal birds!!! Combined with the large, powerful thighs of Andrew Liang, Stanford could be a powerful force in the league!

I, too, loudly proclaim BFH

someone told me he was going to harvard

I too heard the same thing