Larkin Lights Up 200 IM While Wilimovsky Bests Horton In QLD 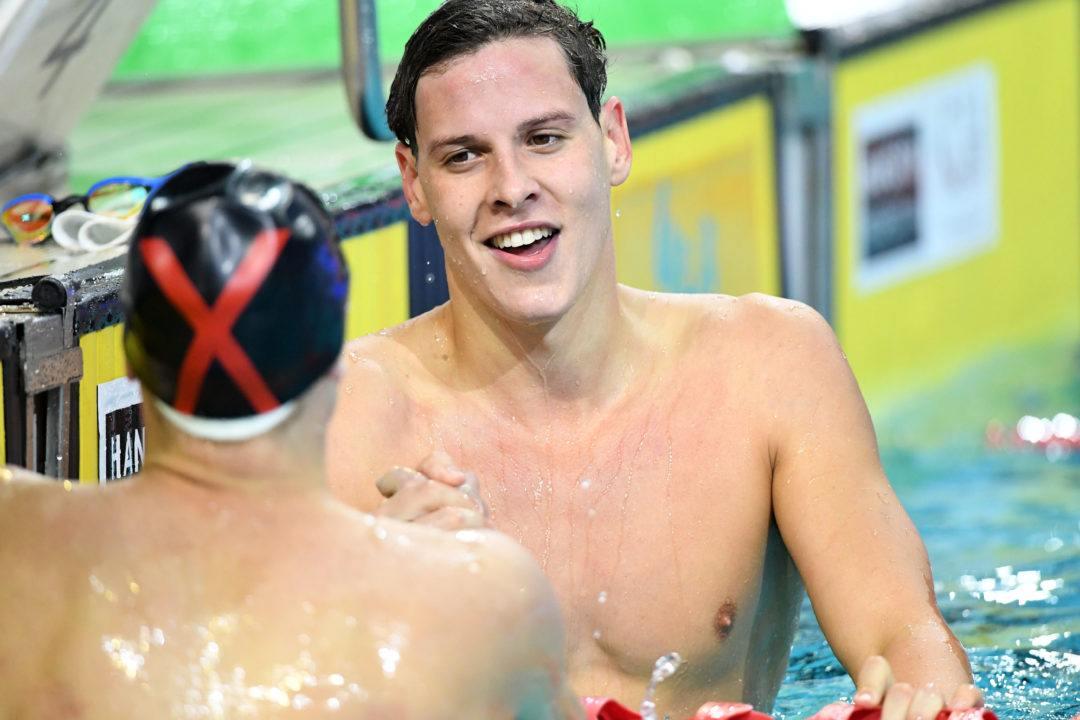 Mitch Larkin tries an 'off' event on for size, while Ariarne Titmus and American Jordan Wilimovsky pull off the distance wins in Queensland. Archive photo via Delly Carr / Swimming

After knocking spectators’ socks off with a new Australian national record in the 400m freestyle yesterday in 4:02.86, 17-year-old Ariarne Titmus completed her freestyle treble with the 800m victory this evening. Entering this meet with a personal best of 8:23.08 from April’s Aussie Nationals, Titmus came within about 2 seconds of that mark with a time of 8:25.22 to take gold tonight in Brisbane. The outing represents the Tasmanian teen’s 2nd best time of her career, and she already hauled gold in the aforementioned 400m and also in the 200m freestyle on night 1 in 1:56.34, another career best.

Another show-stealer tonight came in the form of Mitch Larkin, the 2015 double world champion who is getting back on his feet after trying out a new coach in Simon Cusack at Commercial. Now back at St. Peters Western, Larkin appears to be regaining his footing. He already took the 100m backstroke Queensland title in 54.03, after having cruised to a 400m IM victory in 4:20.45 on night 1.

This evening, the 24-year-old Olympic medalist scored a double whammy, finishing on top in the men’s 200m back and 200m IM in less than an hour. In the former race, Larkin did his usual thing to win decisively in a time of 1:57.41. The next fastest backstroker was 19-year-old standout from Budapest and Larkin protégé at SPW, Jack Cartwright, who notched 1:59.99, the 4th fastest time of his young career.

In the 200m IM, Larkin impressed with a new personal best mark of 1:58.89 for gold, beating the 1:59.31 he produced at this same meet last year. Comparing 2016 splits versus this year, Larkin made strides in the breaststroke leg, where he clocked 35.70 previously and 34.38 tonight. The strategy worked to produce his career fastest and give him the gold by almost 3 seconds. With a solid time at an in-season meet, the question is most certainly raised as to whether Larkin would add this event to his Commonwealth Games Trials repertoire come next February.

What had the potential to be a thrilling duel fizzled into a one-man show, with American Jordan Wilimovsky easily taking the men’s 1500m event in 15:08.98 over 400m freestyle Olympic champion Mack Horton. Horton finished in 15:15.49 to give the 21-year-old Melbourne Vicentre swimmer a silver medal, well-off his sub-15:00 range. For the visiting Wilimovsky, tonight’s result sits just outside the successful open water athlete’s top 10 1500m times of his career.

Seebohm seebombed that 200 back. WTF?

McKeon’s 200fl is impressive when you take it in the context of her other swims here… She was 2.5s off her PB in the 100fl final a few days ago.