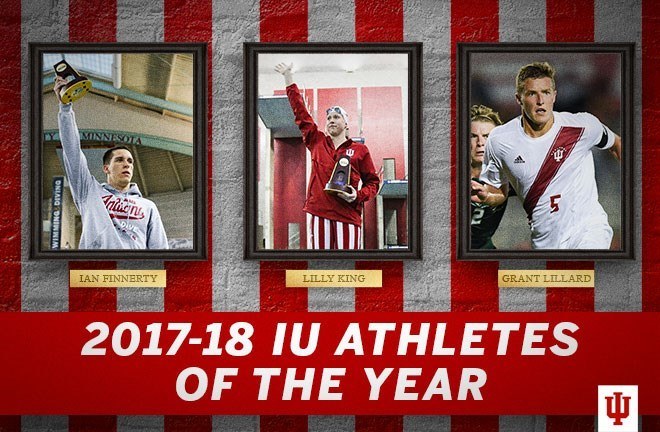 “Competing and excelling on the biggest athletic stages is a top priority for IU Athletics, and Lilly King, Ian Finnerty and Grant Lillard have clearly done that,” said IU Vice President and Director of Intercollegiate Athletics Fred Glass. “What is equally impressive is how they each combined their extraordinary individual achievements with tremendous team success on the Big Ten and NCAA levels. Congratulations to all three for being very deserving recipients of our IU Athlete of the Year award.”

King, a three-time recipient of the award, became just the third person in Big Ten history to be named the league’s Female Athlete of the Year more than once.

The six-time NCAA champion successfully defended her titles in both the 100 and 200 breaststroke in 2018, posting the fastest times in history in both events and becoming the first woman in Big Ten history to win three-straight national championships in league history.

“One of the most impressive attributes of Lilly King is her amazing level of consistency, IU head swimming coach Ray Looze remarked. “She is a true winner in every sense of the word. Hard worker, outstanding leader, confident, and unbelievably passionate in her commitment to Indiana University. As the reigning world record holder in four different events, she is truly one of the premier athletes on the face of the planet.”

King’s six NCAA crowns are the most for any woman in Big Ten history and also matches Rebecca Soni of USC and Kristy Kowal of Georgia’s NCAA record of six total breaststroke titles.

Along with her two championships, King earned four All-America honors, helping the Hoosiers place eighth overall at the NCAA Championships – the third-straight top-10 finish for Indiana.

Along with her NCAA titles, King was named Big Ten Swimmer of the Year for the third time and also earned her third-straight First-Team All-Big Ten selection. King is also a two-time Academic All-Big Ten honoree.

At the 2018 Big Ten Championships, King won two individual league titles, sweeping the breaststroke events for the third-straight season, and also helped IU win crowns in the 200 and 400 medley relays. For her career, King is a 12-time Big Ten champion.

“Ian Finnerty has come a long way since his days at Bloomington South High School”, Looze said. “He committed to the most diversified mixture of training on our squad this past year, which really paid off allowing him to contribute in a variety of areas for the team at the highest NCAA level. To top things off, sweeping all the breaststroke events at the NCAA’s with training partner Lilly King was an incredible accomplishment for IU.”

In the 100 breast Championship Final, Finnerty became the first swimmer in history to break the 50-second barrier, posting the best time in history in 49.69. He won the 200 breast with a Big Ten, school and pool record time of 1:50.17.

The junior played a pivotal role in the Hoosiers repeating as Big Ten champions, earning the program’s 26th league crown.

“It’s great to have Grant honored by our athletic department as co-Male athlete of the year,” IU head men’s soccer coach Todd Yeagley said. “To be selected among so many great athletes competing at IU is a great accomplishment. Grant helped lead our team to one of our finest seasons in program history and played a huge role in our record-setting shutout. Grant certainly left a big mark on our program and we are excited to see him continue on his soccer journey as he excels for the Chicago Fire in Major League Soccer.”

The Hinsdale, Ill. product started 25 matches for the Hoosiers at center back, helping lead one of the best defenses in the country.  IU led the nation in shutouts (18), goals allowed (7) and goals-against average (.260). He has also contributed offensively this year, totaling two goals and two assists. Lillard was also a standout in the classroom, earning his third-straight Academic All-Big Ten honor in 2017 after being named a Second-Team United Soccer Coaches Scholar All-American in 2016.

After helping guide Indiana to the College Cup National Championship match and a 18-1-6 record on the season, Lillard signed a Homegrown Player contract with the Chicago Fire of the MLS.