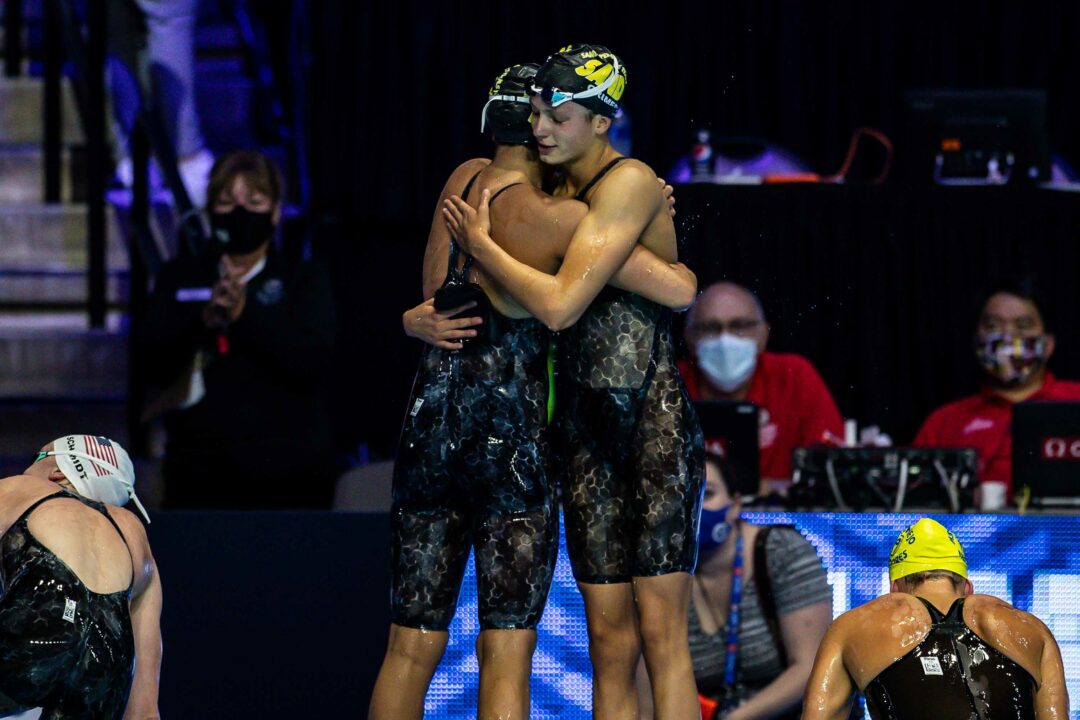 15 year-old Katie Grimes went from "the future" to "the present" of US distance swimming after finishing 2nd to Katie Ledecky in the 800 free tonight. Current photo via Jack Spitser/Spitser Photography

It was no surprise when Katie Ledecky won the women’s 800 free Saturday night. It was much more of a surprise when 15 year-old Katie Grimes touched 2nd, bringing back memories of Ledecky’s own rise to prominence on the world stage when she first made the Olympic team in this event at age of 15.

During the post-race press conference, when Katie Grimes was asked how overwhelming the previous 60 minutes or so had been, Grimes simply replied, “very,” and then eventually went on to explain how supportive Ledecky was been in helping her through the ceremonies that followed making the team in the event.

Katie Ledecky described how she told Grimes “you’re the future,” after Grimes got 3rd in the 1500 earlier in the week, but after Grimes qualified for Tokyo by touching 2nd in the 800 tonight, Ledecky told her “you’re the now.”

Ledecky also discussed how she and Simone Manuel made an “informal pact” to stick together and how that bond made it particularly tough to watch what Manuel struggle with training after being diagnosed with overtraining syndrome earlier this year.

It was a tale of two races in the women’s 800 free: Katie Ledecky versus the clock, and then the rest of the field battling for second.

Ledecky asserted herself early, taking off from the gun and running away with her fourth victory of the week in a time of 8:14.62, just under a second off her season-best of 8:13.64 set in March. The time for Ledecky, 24, falls just shy of the top-25 swims in history.

In an exciting race for the second spot, Bella Sims, Erica Sullivan and Haley Anderson all held the position at one point over the first 400 meters. Thing slowly began to separate, on the back-half, with 15-year-old Katie Grimes gradually moving through the field, turning third behind Ledecky and Anderson at the 700.

Grimes becomes the third Sandpipers of Nevada female swimmer to qualify for the team this week, joining Sims (800 free relay) and Sullivan (1500 free). Grimes also smashed her previous best of 8:31.73 set in the prelims, and now ranks third all-time among 15-16s, trailing only Ledecky and Janet Evans.

Sullivan fell down to sixth in 8:24.02, but still chopped two seconds off her lifetime best.

Michael (2 of them), Ryan, and Katie (at least 3 of them), the namesakes will see in swimming.

Not to mention there are two Simones in the US Olympic team – Simone Biles (gymnastics) and Simone Manuel (swimming).

I wanna see who had katie on their pick ’em

I hope Ledecky will have successful Tokyo games and then retire after the games on top. She has nothing else to proof to the world and her dominance over long distance will not last forever. But then again I have no idea how much competitive fire she still has

I think Katie L will add the 400IM, she did have the American Record, just before her teammate Ella Eastin set her record. There are only Three years till the next Olympics, I’m confident that KL will continue to be #1, at least in my book!

Can we take a moment to recognize what an absolutely incredible person and sportswoman Ledecky is? We talk about her swimming greatness which is, of course, incredibly warranted but what a teammate! The joy on her face seeing Grimes finishing second, her selflessness (barely celebrated her own win) to go swim to Grimes’ lane and congratulate her and hold up her hand for the crowd, to helping her through her first news conference… I’m sure this will continue as she supports her through training camp and in Tokyo. These young teenagers on this team are so lucky to have a role model like her- so gracious and helpful- despite that she wasn’t have her best meet… I was really moved.… Read more »

I agree 100 percent. When the reporter broke it to Grimes that her mom and dad won’t be able to watch Ledecky stepped in to say she will create a family of support. Awesome awesome.

Very well said. To heap praise on someone else (even though she just had her own amazing achievement) just sums up what a great person she is – so genuine and wonderful sportsmanship.

Katie Grimes is going to do incredible things!

Even though this is the first women’s 1500 free on the Olympic stage, I wonder if the ‘aging’ Katie will cut back to 800/400/200 over the next years leading into Paris. Can’t see her dropping just to 200/400, but if Grimes does step up again (along with Titmus maintaining 800 form) who knows?

Quite the opposite, if anything Katie would drop the 200 and possibly 400, her skill set and the strength of the field would make the 800/1500 her strongest events. But let’s wait until the 400 at the games, and maybe the 400 at the 2022 Worlds(real training cycle), before we start removing events from her 2024 lineup. She could go a 3:58 and lose handily to Titmus, or she could go a 3:55 and set a WR, trials are only trials. Either way, the 800/1500 will remain longer, the world has a bigger gap in those events to close than they do in the 400 and 200, where there’s never really been a on paper gap

I think 358 for KL is more likely. But I also think a 358 for Titmus in the finals is more likely as well…this idea that Titmus wasn’t tapered or is going to drop time at a bigger meet (nerves) without clean water is unlikely imo. Who gets there hand on the wall first in that race though is a harder call to make

Most swimmers tend to drop down to shorter distances as they age as endurance swimming seems like a young person’s sport. But then it’s hard to say with Ledecky because she’s so unique and we haven’t seen an equal competitor emerge on the long-distance side. It’s also possible people drop out of the scene entirely due to injuries, age catching up, etc. with swimming being a fickle sport.

Really appreciate Ledecky’s accomplishments and sportsmanship. Simply enjoy having her while she’s around.

You didn’t see an equal competitor emerge on the long-distance side? Just look a bit up North, at Canada. Summer will bring this dominance down, God save her from injuries

That was my biggest rooting interest of the night. It is so important to establish female distance swimmers in their mid teens. Grimes barely snuck into that 800 final, largely due to Leah Smith underperforming. I sweated that out, since Grimes’ late surge in the 1500 made it open she belonged on this team. Normally I stay away from the Rowdy Gaines knocking but his calls during this meet have been borderline ridiculous. Does he need his eyes checked? Every time he touts someone charging from an outside lane they are doing nothing. Tonight with barely above 50 meters remaining he declared that Beisel was correct, that Haley Anderson was surging toward a second Olympic spot and had opened up… Read more »

It’s really sad how Rowdy and his commentaries have become a distraction from the actual swimming. Why they bring him back every year is mind-boggling.

Amazing.
The 3 girls of Sandpipers have made the team.
One in the 4X200 free relay.
Another one in the 1500 free
And the last one in the 800 free.
Hopefully their LCM progression will not be stopped in college.
I would prefer they turn pro and keep training in Nevada where it works perfectly for them.
I have the same concerns about Torri Huske or Regan Smith going to Stanford.
But I know college swimming is a religion in USA. And it’s criminal to even just bring facts that only show that college swimming is not working for everyone.
Take just Cal and Stanford women’s swimming for example in the… Read more »

Well, in Europe you have a different attitude toward the trades. So, someone working out on a club team and works on Volkswagen cars as a machinist is not looked down upon as much as they would to in the US. Two, I think Dagny Knutsen, Katie Hoff, and Kate Ziegler were the only three that chose a club over a college swimming program. Probably in Knutsen case, college would have been better. Hoff almost made it back but got a blood clot. Ziegler didn’t improved. Both Hoff and Ziegler were training at the Fullerton regional group at one time and going to school at Chapman. Chapman is a private school and its not cheap.

I know some swimmers just use the sport as a stepping stone to get into these elite universities like Stanford. Once they’re there, they just focus on academics. Of course, that’s not the case with all the swimmers you listed, but that has to explain one or two.

A few may also just fall out of love with the sport. They might want to explore other things life has to offer.

“A few may also just fall out of love with the sport. They might want to explore other things life has to offer.”

This^^^ Going to college is about much more than just swimming. While that transition can equate to challenges in the pool, the preparation for life beyond swimming can be invaluable for many.

Sandpiper is the new Mission Viejo…. Congratulations and continued success to this model club on an outstanding trials. Hopefully ASCA will have a presentation of their template at the clinic.

Places like Virginia, Georgia, Florida, and Michigan seem to be doing a great job of keeping kids on a positive trajectory in the LCM pool.

What about Texas women? Seems like they get talent and then it stalls. Maybe lots of overtraining.

I’m not buying it one bit. Until the USA adjusts to a sense of normalcy due to the pandemic, no one surely knows the future of the aforementioned swimmers. Furthermore, the general public does not know in each instance how long each individual was out of the pool due to the pandemic.

Out of topic but you should change your username thought , Manuel is out for the relay

Not so far cowboy. If Manuel makes the team on the 50 free and is swimming on fire come Tokyo, she could yet still be placed on the 4×100 medley relay. Remember Schmitt at 2012 London.