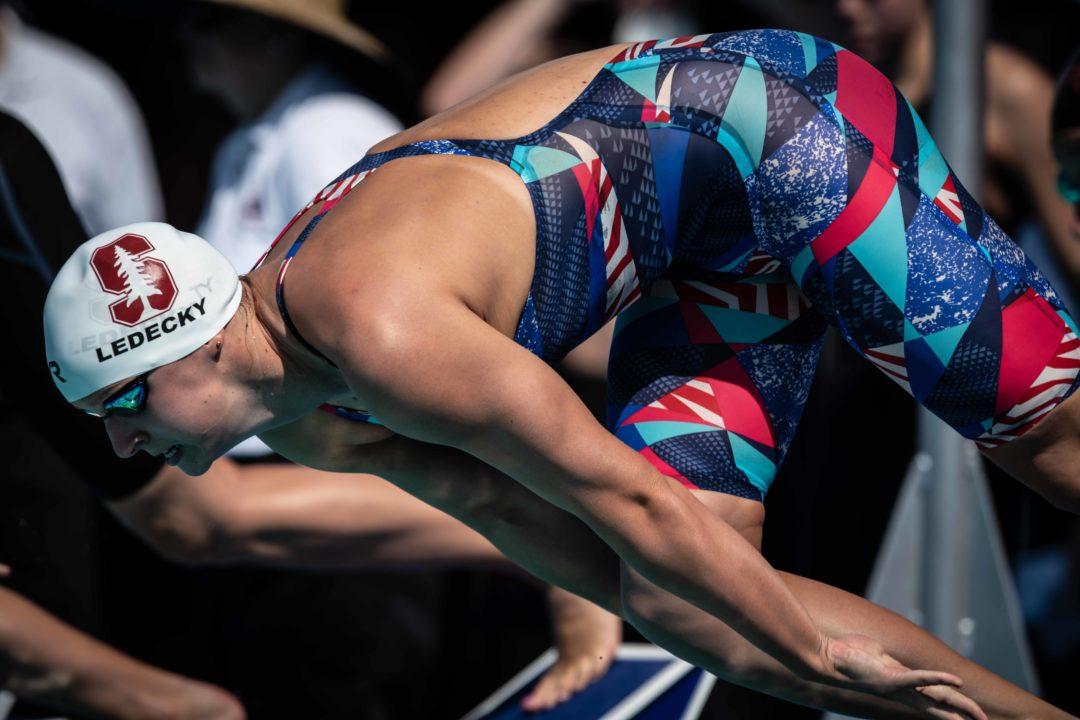 Katie Ledecky elected not to swim the 100 free final on Day 1 of U.S. Nationals, allowing her to focus on the 800 free that takes place 27 minutes later. Current photo via Mike Lewis/Ola Vista Photography

Katie Ledecky has opted out of the 100 free final on Day 1 of 2018 U.S. Nationals after posting a 54.46 in prelims to miss the A final by 7/100. While the prospect of swimming in the B final may have made the decision to concentrate on the 800 free (scheduled 27 minutes later than the 100 free B final) that much easier, Ledecky was nevertheless .68 faster than what it took to make the A final in 2017. As noted by Andrew Mering, the 2018 national championship is already shaping up to be much faster than its 2017 counterpart.

Also skipping the women’s 100 free final was Olivia Smoliga, 12th in prelims with 54.67. Claire Rasmus and Lucie Nordmann moved up into the B final to take the two spots abandoned by Ledecky and Smoliga. In the 200 fly, Katie McLaughlin and Ella Eastin chose not to contest the B final after placing 10th and 12th overall. Allie Piccirillo and Megan Small will take their places in the B final.

Looks like all those big name athletes don’t like being in a B final, so they scratch out!!! -Kinda sad!!

How is the veal? Oh wait, better stick with the rib eye.

I understand the strategic scratches, but doesn’t it hurt the sport? B seem pointless if the big name scratch every time. Why not get rid of them all together???

B/C/D finals at big meets are always pointless in terms of the top world-class athletes. You generally can’t place out of them or (with a few exceptions) qualify for anything out of them. But they’re important to have to give younger and second-tier swimmers experience swimming finals at a championship setting. Go look at the age groupers getting to swim at night at the biggest domestic meet of the year. That’s the real value of having extra rounds of finals.

Exactly. The swimmers that are younger, or the ones that have a big break-through deserve a chance to experience the atmosphere and pressure of finals at Nationals, even if they can’t make the “Big” team.

Well, for the ones that have events tomorrow morning in particular – if the goal is to make the Pan Pacs Team, why expend energy when that isn’t possible tonight?