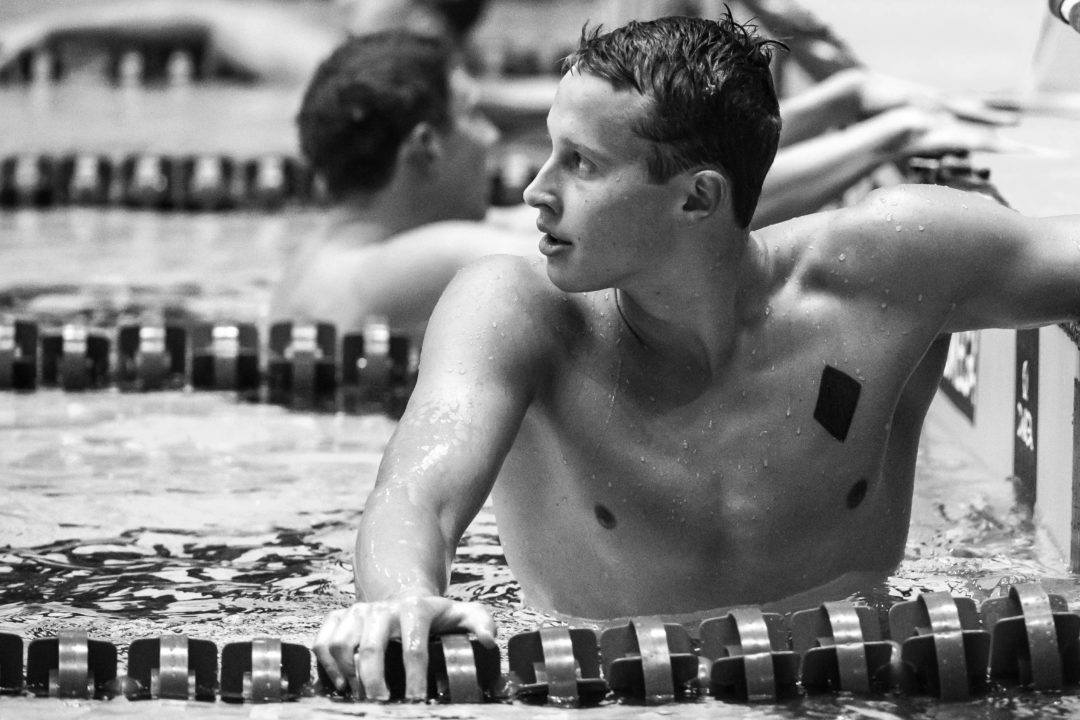 Swimming in finals of the 400 free relay on Sunday evening at the 2017 World University Games, there were two members of the North Carolina State Wolfpack varsity team who were on the American squad.

It’s no great revelation that NC State, under the coaching tandem of Braden Holloway and Todd DeSorbo, has become one of the great centers of swim sprinting in the United States. Now that those two coaches have split up, with DeSorbo taking over as head coach of ACC rival Virginia, there are new questions about whether the two will be able to capture the same magic separately as they did together (and if they can, that would be great for American sprinting).

But there is revelation in the 48.0 split of Ress, which was actually better than that by his teammate Held at 48.2.

Held is the more known of the two as a sprint freestyler – he was on the finals 400 free relay that won gold at the 2016 Rio Olympics. Ress was the only of the two who earned a spot on this summer’s World Championships team, though it was in the 50 backstroke (he placed 5th).

For Ress to out-split Held on this relay (.09 of that came from  a faster relay start), is less significantly about Held and more significantly about Ress – who in less than a year, has gone from internationally anonymous to internationally a future cog in the American machine. At the NCAA Championships, in yards, Ress was out-split by Held by 7-tenths of a second, which becomes over a second over-water if one factors in that Held was the leadoff leg.

But this morning, the buzz was all about Ress and his 48.0. And that’s why these World University Games are so valuable – Ress got a chance to show his quality in an event where he couldn’t crack the Worlds lineup (though his 48.07 wound up being slightly faster than Blake Pieroni’s 48.09 in finals at Worlds). And now we have one more star to be excited about for the upcoming NCAA after the graduation of the likes of Jack Conger and Ryan Murphy.

Ress’ improvements still probably aren’t enough alone to close the gap to Texas, who will enter the seasons as NCAA favorites again, but having multiple undergrads who are the stars of international competitions is the next big step in the process of putting the Wolfpack in the stratosphere with the 3 teams ahead of them, Florida, Cal, and Texas, in the top tier of collegiate competition.

He also swam the semifinals of the 100 back less than a half hour before this 100 free swim, which in my mind, makes it even better.

Ress is one of the scrawniest fast dudes in the world. He has a big upside in the future.

he is looking good …..damn , Team Usa is having such an arrival of uprising talent lately ……

Him and Cam should arm wrestle

The title makes it sound like Ress and Held were teammates in Rio.

Please note that Ress wasn’t even training sprint until March or April of 2017, and has progressed into this strong of a sprinter.

Ress split 18 low during the NCAA season and was the Wolfpack’s #2 relay guy the entire year coming up big on their 400 medley at ACCs. Let’s not make this into more than it is, Ress is having a huge summer in everything ( I really hope they throw him on the 800 free relay this week) while Held is slightly off his form from last summer which if we look across the board a lot of Olympians were. They’re both incredible athletes let’s not act like 48.07 to 48.25 is the upset of this decade. 18 one-hundredths is a touch and a slightly better jump off the start/wall

Well, it was deemed to be article-worthy, which implies it was seen as sort of a big deal.

Lots of implications and inferences going on here.

I think it was the split that was article worthy, not the fact that he outsplit Held. That was just a coincidence that made a good title.

Well he did out split Held on the relay

To be fair, it was never said that this was an upset. They weren’t even racing each other. It was a really good split for him and, as you said, they’re both incredible athletes.