Joseph Schooling Will Not Be Competing At 2018 Commonwealth Games 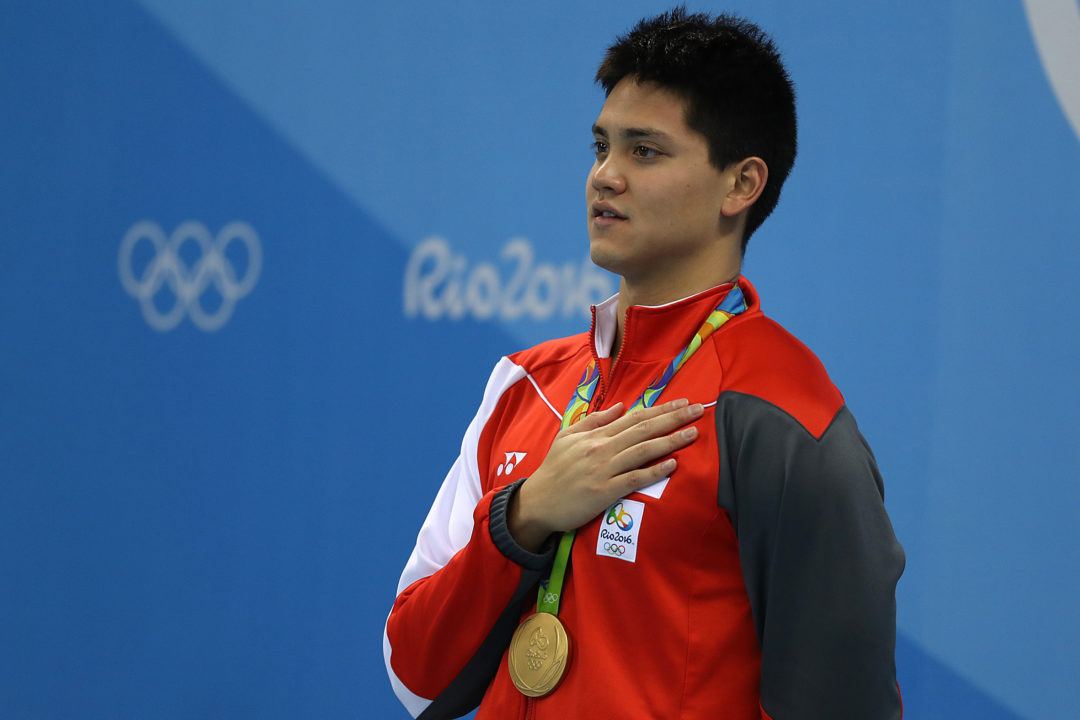 Joseph Schooling has decided to focus on the NCAA Championships and opt out of the 2018 Commonwealth Games. Archive photo via Simone Castrovillari

Last November we reported how the question as to whether or not Olympic champion Joseph Schooling would compete at this year’s Commonwealth Games was still up in the air, as the competition set for the Gold Coast sits in close proximity to the Singaporean’s final NCAA Championships as a Texas swimmer.  The 2018 Men’s NCAA Championship meet spans March 21st through March 24th in  Minnesota, while the swimming competition at the 2018 Commonwealth Games is set for April 4th – 9th.

As such, Schooling confirmed with SwimSwam today that he will indeed not be swimming at the 2018 Commonwealth Games. Schooling said in a Singapore Swimming statement, “This will allow me to concentrate fully on the Asian Games and ensure that I put in my best performances for Singapore in Jakarta.”

This means the men’s 100m fly field in the Gold Coast has just gotten narrower, with South African Chad Le Clos battling one less competitor. Britain’s James Guy may now prove to be his biggest foe in the event in which Le Clos earned the Commonwealth gold back in 2014.

For Schooling, he’ll be focusing on the NCAAs where he intends to take back his 100 fly title from Florida rival Caeleb Dressel.  From there, the 22-year-old will prepare for the Asian Games, which take place in August.

Speaking to Schooling’s decision, which also applies to NCAA Singapore siblings Quah Zheng Wen and Jing Wen, National Head Coach and Performance Director Stephan Widmer said, “After consultation with the athletes and their coaches, the High Performance Committee, and the SSA’s Selection Committee for the Commonwealth Games, I am supportive of the decision to not nominate the three swimmers for the Commonwealth Games.

“This decision will ultimately benefit Singapore, as we look to achieve our aims of challenging for medals in Jakarta, and closing the gap on the rest of Asia.

“To be competitive with the stronger Asian nations, we need these three high performers to be at their absolute peak. That’s crucial for Singapore to be in Team relay medal contention at these games.”

His attitude to the Commonwealth Games is refreshingly realistic. Way too many athletes, particularly Australians, give this competition much more prominence than it deserves. It always annoys me when a swimmer’s achievements are listed and there’s a reference to their CG medals as though it’s some kind of elite competition with no reference made at all to the Pan Pacs where the standard is much higher.

It’s all about legacy. Australians view CG in a different light because for years, for decades, CG has been the premier competition for them every 4 years. Pan Pacs’ competition may be higher, but you have to remember, CG is a multi sport event, it brings more attention and spotlight on the swimmers as well. Frankly outside of the swimming world, who cares about Pan Pacs?

Joseph’s case is slightly different. Asian countries who participate in both CG and Asian Games always have had to grapple with the issue of which meet to prioritise especially if they fall within similar periods occasionally. There was one year in 2010, where Singapore swimming sent a B squad to CG and had its… Read more »

he doesn’t seem to want to do anything challenging anymore

I don’t think there’s a chance in hell he beats Dressel in the 100 fly at NCAAs. Dressel is a freak. My prediction is Dressel goes 43.0 and Joe goes 43.3

Will be VERY surprised if Joe is better than 43.5. Will also be surprised if Dressel is 42 but also not surprised at the same time…

1:29 is a massive barrier. Easily that. Would also be a huge indicator for his 200 free this summer

Dressel or Schooling, NCAA 100 fly–who do you predict will win?

2
-2
Reply
Caeleb Dressel Will Get 7 golds in Tokyo
Reply to  Dan D.

Caeleb Dressel pretty easily imo. He had absolutely awful turns compared to Conger/Schooling and still blew them away in the back half of the race. He opened slower at NCAAs than at SECs because of his poor first half walls.

It’s 50-50. I am sure Schooling will be careful this year. The loss last year was due to his negligence.

Definitely not 50/50. Dressel has surpassed Schooling is every facet

It’s Dressel’s to lose, but it’s a game of inches.

I have to bet on schooling. he´s really hungry after all the loosing last year. This year he had trained well, so i believe he got it

Comes as zero surprise as CG timing (with its near clash with NCAA Championship) was never going to work out whereas Asian Games is where SIN officials are looking for the big performance ….. and where the potential big $$$ payday may come should he (and his team-mates) be successful.

Though i want him to take part in Commonwealth Games, i respect his decision. This is good for his long term plan. Not necessary to exhaust himself.

Well this is a relief

I believe it meant a relief for LeClos ….lol

Lol.. The real Le Clos may feel disappointed that Schooling is not present but at the sane time, a relief for him as his gold medal goal is easier to achieve now.

What are you guys afraid of 🙂