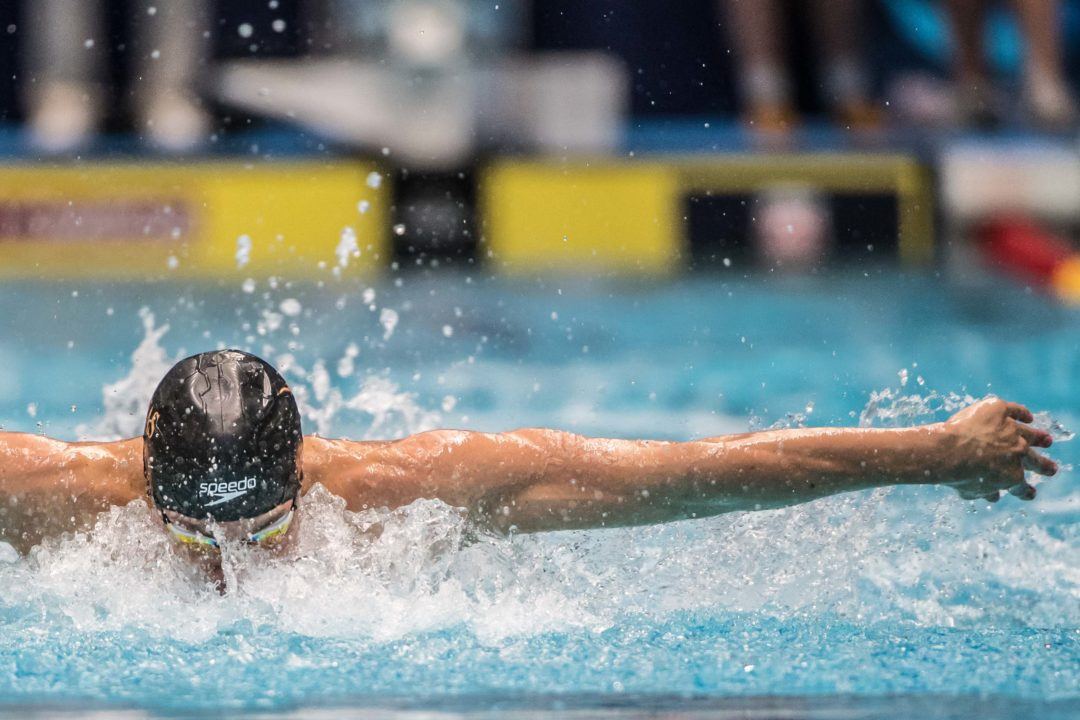 Texas Longhorn John Shebat is entered in a tough 100 fly/100 back double according to the pre-cut psych sheets for the 2018 NCAA Championships. Archive photo via Mike Lewis/Ola Vista Photography

Shebat has been a bit of an enigma this season, missing much of the second semester with an undisclosed injury and only earning an NCAA bid at the last minute with one solid swim at Big 12s. He was the NCAA runner-up in both the 100 and 200 backs last year, moving up to 3rd all-time in both events. He’s currently seeded 14th in the 100 and 35th in the 200, though, and will need huge drops to make A finals (or even to score in the 200).

Meanwhile he’ll also potentially add a 100 fly before his 100 back on Friday. Shebat has entered the 100 fly, where he’s 178th on the pre-cut psych sheets (though he should move up significantly once non-invite swimmers are cut). We actually asked Shebat about the 100 fly way back in November, and he did note the 100 fly/100 back double, though he said he enjoyed swimming fly.

He could still scratch the fly. That’s what he did with his third event last year. Shebat entered in the 50 free, but scratched on day 2 a year ago. He’s expected to be a big part of Texas’s relay group after swimming the 200 free relay and both medley relays last year.

Having Shebat healthy and swimming his best is crucial to Texas, which has won the past three NCAA titles but suddenly looks vulnerable with a big hole in breaststroke and Shebat’s status uncertain.

not in 200 Back means points lost for UT

I believe he went a :52 LC this summer, and we know his underwaters are great – so this is a reasonable move. But fly comes first in this double – so that worked against his premier event

I did 100 fly/100 back double all four years in my college days and there is significant break in between the events. Never felt like my 100 back was hampered by 100 fly. 200 free and 100 breast are between the two events. Never understood why people think this is a tough double.

Your body apparently didn’t produce lactic acid like mine did! Hopefully this will be easy for Shebat.

TNM, me too. I don’t know what you’re smoking, but it is not nearly as easy as you make it out to be. There was 30-35 minutes max between the two events in finals. That is not enough time to fully recover those legs, especially if you are an underwater guy. And everyone who does the double has good underwaters. It may have been around 45 minutes between the two events in prelims. That extra 10-15 minutes makes a huge difference. Cudos to Shields and Subirats who made winning the double look easy.

I did this double also — and by the 4th 100 of the day (and the 16th big kickout), my legs were definitely shot. Agreed it’s doable. It’s probably the most common double in the NCAA championship format — but it still ain’t easy.

And now the 2 med is after both. The kids got it easy now! While the 100 fly/back double is indeed tough (but will admit it’s probably the easiest of all doubles and certainly the most common), I always thought the quick turnaround from 2 med to 100 fly was arguably worse. What’s more impressive of the below? -Shield’s quad when he did 2 med, 100 fly, 100 back, and 8 free relay and crushed them all (think it was 2012) -Dana Vollmer’s 100 fly, 200 free double where she got 4th and 1st (note they are back to back events), respectively, and then followed it up with a killer anchor leg to take the 8 free relay. Honorable mention… Read more »

I had no idea Vollmer pulled that off. I remember Shields trying it in 2010 and thinking after that that it’s impossible. No wonder she had a WR/ OG Gold. BOSS