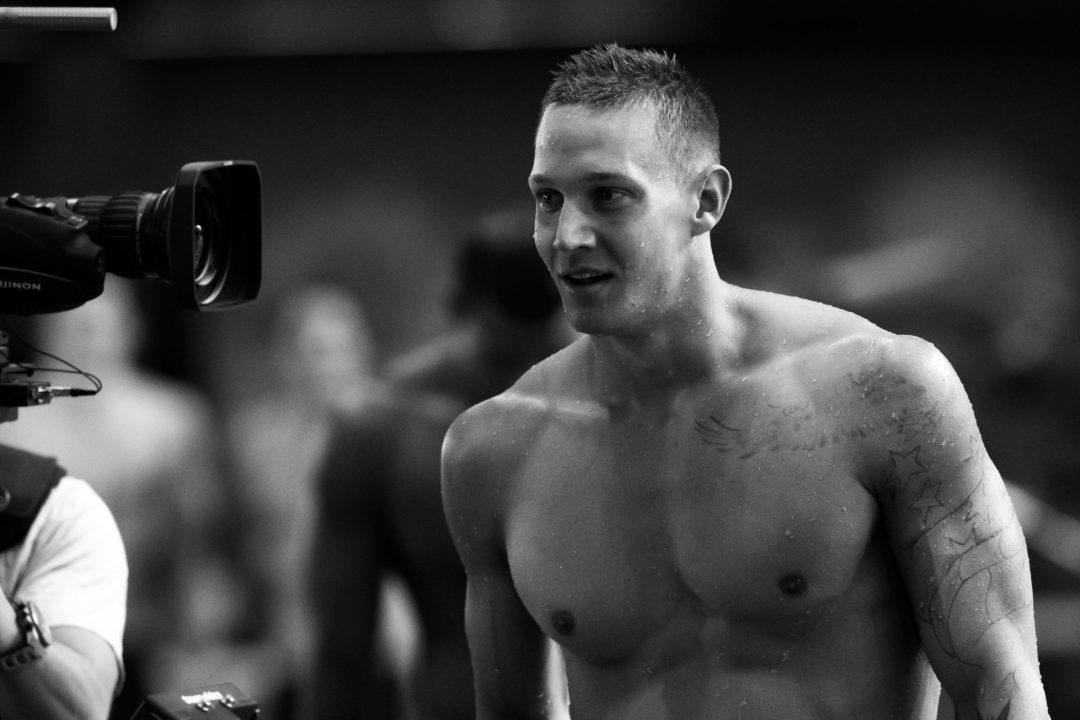 The fun we had all had watching Caeleb Dressel's breaststroke is over, at least for his individual NCAA career. Archive photo via Mike Lewis/Ola Vista Photography

Caeleb Dressel’s exploration of his breaststroking and IM skills has come to an end, at least for his collegiate career. The 2018 Men’s NCAA Swimming & Diving Championship pre-selection psych sheets were released on Tuesday morning, and with it came the revelation that Dressel would return to his more traditional schedule of 50 free, 100 fly, 100 free on days 2, 3, and 4 of the 2018 NCAA Championships. That’s the same event that he’s raced in each of his 4 seasons of collegiate swimming.

That means that Dressel won’t swim the 200 IM or the 100 breaststroke – two races where he raced to the fastest times in history at the SEC Championships. He said after the 200 IM that he had to talk his coach Gregg Troy into letting him swim it; while he would be a prohibitive favorite to win the event again at NCAAs, his switch to the 50 free on the meet’s 2nd day makes far more sense from a team perspective. Florida won’t have another entrant in the 50 free at the meet, while they could have 2 other A-Finalists in the 200 IM – 2nd-seeded Mark Szaranek (1:41.00) and 5th-seeded Jan Switkowski (1:41.83). At SECs, where the team battle was a runaway, that was less of a concern.

While he won’t swim that 200 IM or 100 breaststroke, that doesn’t mean that the swims won’t have an impact on his NCAA Championship meet events. Thanks to his all-time breaststroke, the Gators now have a viable medley that uses him on the breaststroke, Switkowski on fly, and Mark Szaranek or Maxime Rooney on the freestyle anchor. Last year, Dressel swam fly and Switkowski free, but with a 2.8-second gap between Dressel and the team’s next-best breaststroke; a second-and-a-half gap from Dressel to Switkowski on fly; and a less-than-a-second gap between Switkowski’s 100 free and that of some of his Gator teammates, a marginal gain on the medley could be made that way over last year’s medley.

While Dressel is swimming his usual events, there will still be something unusual about his individual lineup. He’s only the 78th-ranked swimmer nationally in the 100 fly this season. Some of the swimmers ahead of him won’t earn invites to the meet, but that still leaves Dressel with a very-early-heat draw at the NCAA Championships.

I seem to see a general consensus that Dressel returning to his typical events is the best call for the team. I’m just curious, if anyone can help me understand, how not throwing him in the 100 breast is not optimal? Florida has no breaststroker at the meet and Dressel, if he did not claim the most points, would definitely collect big points.In the 100 fly Jan will pick up solid points, would it not be better to pick up solid points around more events than to stack one event?

Have you ever heard the tragedy of Darth Farris the wise?

The boy is good, but I am betting heavily on sebulba!

Lets break down this relay a decision a little more. I feel it may not be the most ideal thing to do to point wise put him on the 800 free, but I don’t think it would make that much of a difference. Without himin the 800 fr rel, they have a chance to win, but Id still go with the strong field to beat them. With him, I give them a very very strong chance. Just winning as opposed to getting 2nd place is an 8 point bump. So even if another caleb-less relay placed 7 spots worse (lets says there 400 free would get 3rd with him and 10th without him) it really would only be a net… Read more »

When Florida’s women won NCAAs, they beat Stanford by 2.5 points. At NCs, you don’t sacrifice point-scoring opportunities for individual glories, and Dressel is the consummate team player. He is going to swim whatever gets the most points for the team. Florida has the firepower to win that relay without him. Trust me, I would LOVE to see it happen, but I don’t think it will.

When they don’t win the relay without him, don’t win any of the others with him, aren’t within 50 points of winning the meet, it will seem silly that he missed an opportunity to hit a landmark historic swim in his last scy meet of real priority. I just think the chance of Florida winning team title is so slim and chance of 129 is so great…

Is Caeleb fully tapering for NC2A’s? Or is he focusing on long course this summer?

He should be resting. He is a senior and Florida has a chance at top 2-3

Fully tapering does not ruin the rest of the year. Why do people think swimmers, especially sprinters, can’t “peak” several times in a year? USA Trials to Olympics is 5 weeks, and I’d assume that almost every single swimmer who made the recent teams fully tapered for Trials (the exception being Katie Ledecky). Rio was an incredible success for all those swimmers who peaked for Trials and Olympics.

Who,s Florida,s best option for the backstroke leg of the medley relay and what,s his best time?

OK, somebody had to do it. Let’s start a movement! Please check out my petition to get Dressel on the 800 FR!

Braden — can you help get this to Coach Troy?!

Careful… you might only be setting up Dressel for another big prank: https://swimswam.com/dressel-lead-off-gators-800-free-relay/

There’s no competition in the 109 breast. I’m surprised he chose 100 fly

He wants to put schooling down one more time.