Projecting the Cut-Line for the 2018 Men’s NCAA Championships 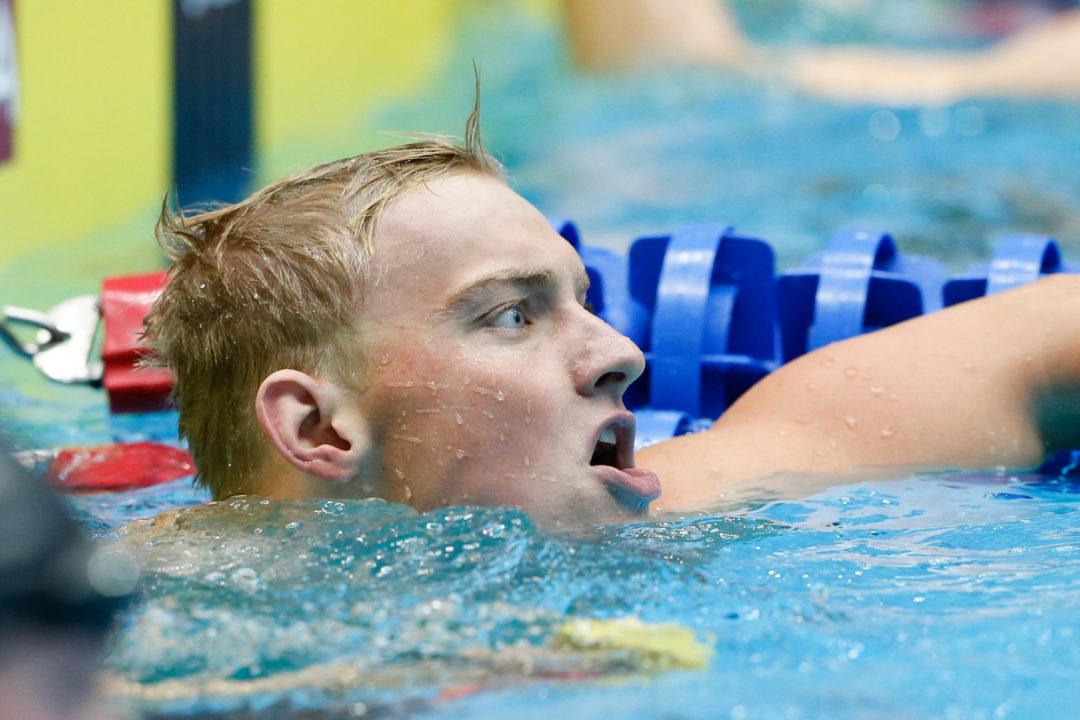 Andrew Seliskar, the 2nd seed in the 200 breast, and the Cal Golden Bears lead all teams with 17 individual swimming entries. Archive photo via Tim Binning/TheSwimPictures.com

A refresher on how that process works: The NCAA will go through, event by event, and add one swimmer to each, until a certain “line” (aka, all 30th-ranked swimmers) puts the field over the maximum 235 individual entries (270 total minus 35 places for divers). At that point, swimmers will be invited based on who is the closest to the NCAA Championship Record in their event from the next line (in this case, line 37). If you want to look at the full procedure, check section 2.4 of the NCAA Pre Championship Manual. Once a swimmer is invited in an individual event, they can swim up to 2 other events in which they have “B” cuts.

Unlike the women’s cut line, that fell way shorter than normal, the men’s cut-line fell about where it usually does – everybody ranked 28th-or-better in at least one event earned an invite, as did the 3 swimmers from the 29-line whose times, by percentage, are closest to the NCAA Championship Record.

This year, the Cal men lead the way with 17 invitees – making them the only team in danger of having to bump an individual qualifier to stay under the cap of 18. They had 1 diver qualify already (who counts as half an entrant), and aren’t expected to take any relay-only swimmers, so they should be clear to take all 17 individual invitees.

Texas, who has had to deal with leaving qualifiers while winning the last 3 championships, and Stanford each have 15 individual invitees. 7 teams have double-digit invitees. That list includes Virginia, who doubled their count from 5 last season to 10 this season.

2 of the first 3 alternates are from the upstart Grand Canyon program, with Danil Antipov and Youssef El Kamash sitting just outside of the meet, for now. Both swimmers will be at the meet anyway – Grand Canyon earned a Qualifying Standard in the 200 free, 200 medley, and 400 medley relays in their first season eligible for the NCAA Division I Championships.

Virginia’s 5 qualifiers last year included Bryce Shelton (diver) who has now qualified again and John Whiteside (who is redshirting). Thus, there are actually 7 new qualifiers – 3 1st Years (ranked as the #56, #72 and #87 recruits by collegeswimming.com) and 4 upperclassmen who didn’t qualify last year. Says volumes about #thedesorboeffect.

I hear the booming economy, North/South Korea peace talks, and the fact that West Virginia teachers are now protesting for higher wages are all due to the #desorboeffect as well.

Sorry, that was all DEAN FARRISS!!!!

Are you trying to get DJT and Coach DeSorbo in a Twitter war? I know who I would have my $$$ on.

In Collegeswimming.coms ranking of the class of 2015 Devine was 75th Apple was 34th, Harty was 78, Ress and Becker were 156 and 157. It doesn’t matter what your ranking is going in.

You make a very good point ^^^, which probably has the UVA recruits even more excited to arrive this August (and the next)!!!!

Michigan sophomores with 7 individual qualifiers, probably the most of any class.

How often do alternates get into the meet

How often do alternates get into the meet?

SwimFan – most years at least 1 or 2 get called up. Off the top of my head, I’d say it’s been more common in recent years at the women’s meet than men’s meet.

4 swimmers who used to swim for Nitro:

Also, Schooling swims at Nitro for Christmas break, so that is 5 🙂

Keywords “used to”. And Schooling is a Bolles product. Everyone knows that.

UNC Tar Heels down to just one individual invite. Big decline for a program that was highly competitive at the national level a decade ago.

Do they even have A cuts in relays? Or will it only be his swims?

Get rid of coach Deselm!!! It’s clearly not working. They always get loads of in-state talent plus fast swimmers elsewhere and they hardly produce top tier swimmers. Great facility and great school should not be spewing such poor results.

Anybody else think Andrew Seliskar looks just like Eminem?

7
0
Reply
coacherik
Reply to  Any Mouse