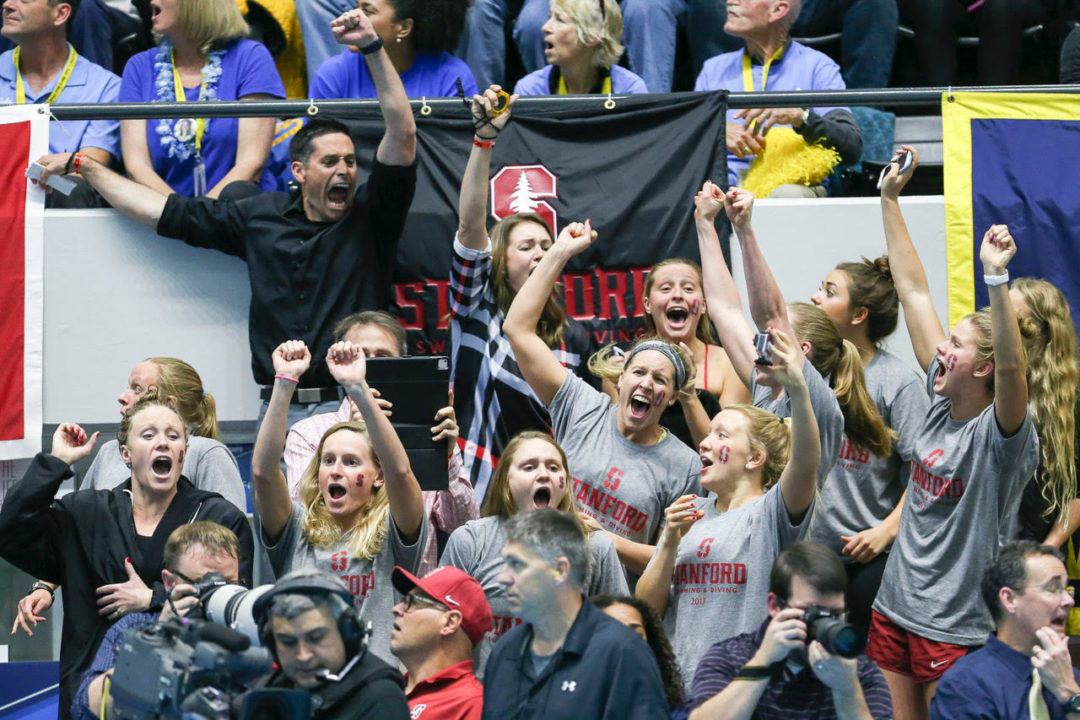 Stanford projects to have the most invitees with 18, before zone diving begins. Archive photo via Tim Binning/TheSwimPictures.com

The cut-line fell shorter than normal this year. The top 36 swimmers in each event were invited, with the alternates beginning in line 37.

Most years, at least a few alternates are taken to the meet. Among other things, this happens because of late-season injuries, or teams that are at the entry cap and then have divers qualify. Only 2 teams, Stanford with 18 swimmers entered already and Texas A&M with 16, are in danger of running into roster caps this year, with divers counting as only 1/2 of a swimmer. Alternates have further hope in that teams entered at least 2 swimmers, who should receive invites, that didn’t swim at their conference championship meets due to injuries: Ky-Lee Perry of NC State, and Beryl Gastaldello of Texas A&M.

We already knew the depth Stanford has, but it will suck to see a talented swimmer being left at the farm when they (most likely) have divers that qualify.

Have to see how many divers will qualify and which swimmers are the least likely to score.

Really sad to qualify for NCAA’s and not get to go! And to think, with that incoming freshman class, next year will be worse for Stanford! Only 4 seniors departing the squad after this year, while 7 “NCAA potential” freshman joining them in the fall. VERY risky if you want to compete at the highest level to represent your school! Next year they could easily have 4 NCAA invites staying home. 🙁

The potential “left behind” swimmers who signed believed they would NOT be left behind BUT the reality of competing for a team STACKED ends up in having these kids watching from home. It has happened many times at Texas (men) and Auburnt (men) over the years. Not hard to fathom the likelihood of this occurring with 14 full scholarships. With 9.9 hard to believe the “even playing scholarship field” is truly in place.

You know what eases the pain of qualifying and not going? Putting on your new national championship ring and writing NCAA champion on your resume. Everyone on their roster has a role and contributes to a team title in some way.

They probably get tshirt also

I swam in the women’s NCAA division 1 championships all four of my years in college and though I did not get a national championship ring or the ability to put that on my resume, I would not trade the experience of swimming in this high-level one of a kind meet for that.

I bet some men are sweating a low cut line like the women! ?

What about relay swimmers who were on a relay that made in a cut, but they did not make any individual cuts? Do they count in the 281 cap?

I believe they have to have 1 individual swimmer INVITED, not necessarily an A cut time

AQUAMAN: https://swimswam.com/only-power-5-teams-receive-relay-invites-to-2018-womens-ncaas/
Another way to tier the top programs in the country is by the number of NCAA Championship invites they earn in relays. Under the new relay qualification systems, only the best-of-the-best programs are able to take relays to the meet. To take a relay, a team is not only required to have an individual swimmer or diver invited, but they also must hit the “Qualifying Standard” (aka “A” cut) in at least one relay. Once those two criteria are met, teams are able to take as many relays as they want, provided they all have “Provisional Standards,” aka “B” cuts.

Swimdadnerd, you have quoted SwimSwam correctly but it does not support your prior
statement that “A school has to qualify at least one individual swimmer with an A Cut …”

SwimSwam correctly used the term “invited”. A team just needs an individual to be invited, and that only requires that a swimmer have one of the fastest B cuts that fill the event up to the cap limit. No event at NCAAs has only A Cut invitees.