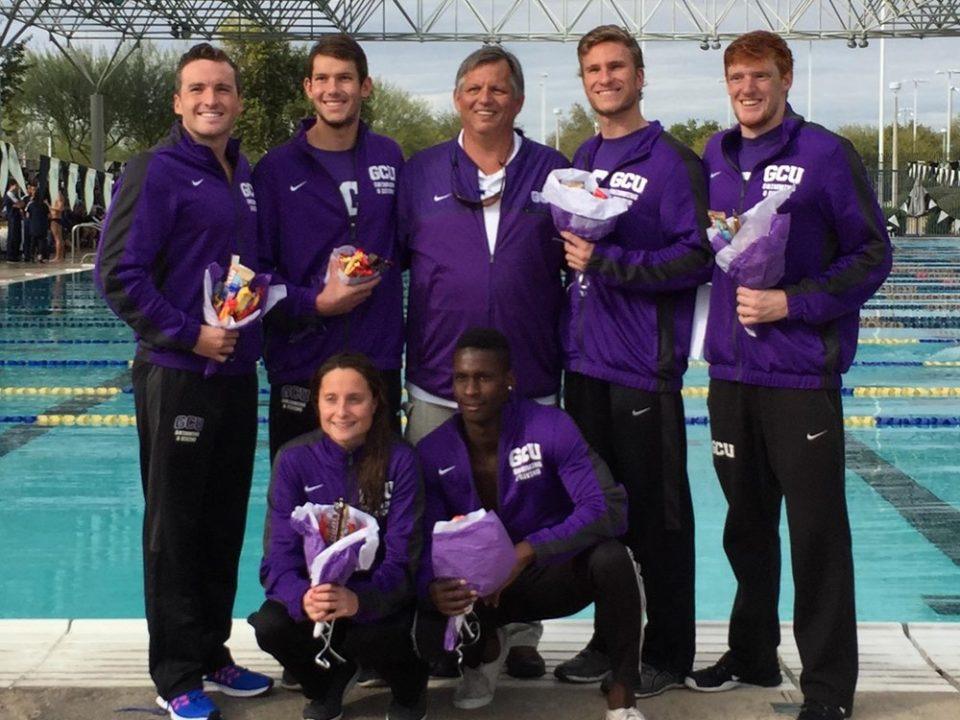 GCU’s transition to NCAA Division 1 athletics began in 2012 when the GCU was invited to join the Western Athletic Conference. Prior to 2012, they were a member of NCAA Division 2 and before that they competed at the NAIA level.

The transition process took four years, during which time the University’s athletic teams were not eligible to compete in NCAA championships. The first two years were spent developing and implementing a strategic plan for their NCAA Division 1 athletic programs. Following that, a self study of athletics program was conducted in the third year. During the fourth and final year of the transition, an NCAA review team visited the University to evaluate its athletic programs.

“We are thrilled to finally complete the NCAA transition period. It has been a long four years,” said head men’s and women’s swimming coach Steve Schaffer. “The transition presented challenges in recruiting with not being able to attend either the DI or DII Championships during the four years and it meant a certain amount of obscurity as a result. We look forward to making inroads with recruiting and in becoming more of a known brand in DI as we continue the process of building our teams.”

This will be the first year that GCU athletes will have a chance to compete at the NCAA Division 1 Swimmming Championships. In the 2016-2017 season a number of swimmers earned NCAA ‘B’ cuts– freshmen Estela Davis Ortis earned an NCAA ‘B’ cuts in the 100 and 200 backstroke, as well as the 400 IM. On the men’s side freshmen Jacob Lambros, Mark Nikolaev, Daniil Antipov each earned multiple NCAA ‘B’ cuts.

“The most exciting aspect for our coaches and athletes is now being able to have our swimmers and divers eligible to qualify for the NCAA Championships. Our men’s team had swimmers who put up times that would have been invited to the championships in each of the four years of the transition, and we had a legitimate candidate to score last year in Mark Nikolaev. We red-shirted two of guys (Youssef and Mazen El Kamash) and one of our women (Iryna Glavnyk) in 16-17 so that they would be able to help in our inaugural efforts to get individuals and relays to NCAAs this season,” continued Schaffer.

“When we began the transition we set goals of a top 30 NCAA finish for our men and getting one or two of our women, as a minimum, qualified to the DI Championships and to have a shot at being among of the oldest rookie coaches at NCAAs.  Those remain our goals today and everyone is very anxious to get started on making those goals a reality this year.”

Would be cooler if Belarus A&M recruited a few Americans

Aviatorfly – Oh, Belarus A&M tried, but it’s a tough sell to get kids to go there. Fortunately, we were able to offer better opportunities to the diver from North Dakota whose program was cut, the state champion sprinter from Nebraska who others overlooked, and the mid-distance kid from Texas who wanted a shot. We are thrilled we could keep those kids in the USA and bring them in this Fall. Lopes Up!

So does this mean that Busch Light is in charge of the 3rd best team in the State of Arizona.

Congratulations and Good Luck Steve and the GCU Antelopes! It’s been a long road, and your patience has been admirable. Now it’s time to make your mark on DI, just as you did from the start of, and throughout, your DII tenure.

Thank you Brad. We are looking forward to it.

With D1 teams dropping out of swimming entirely or eliminating men’s teams, this is great and welcome news! Congrats GCU!