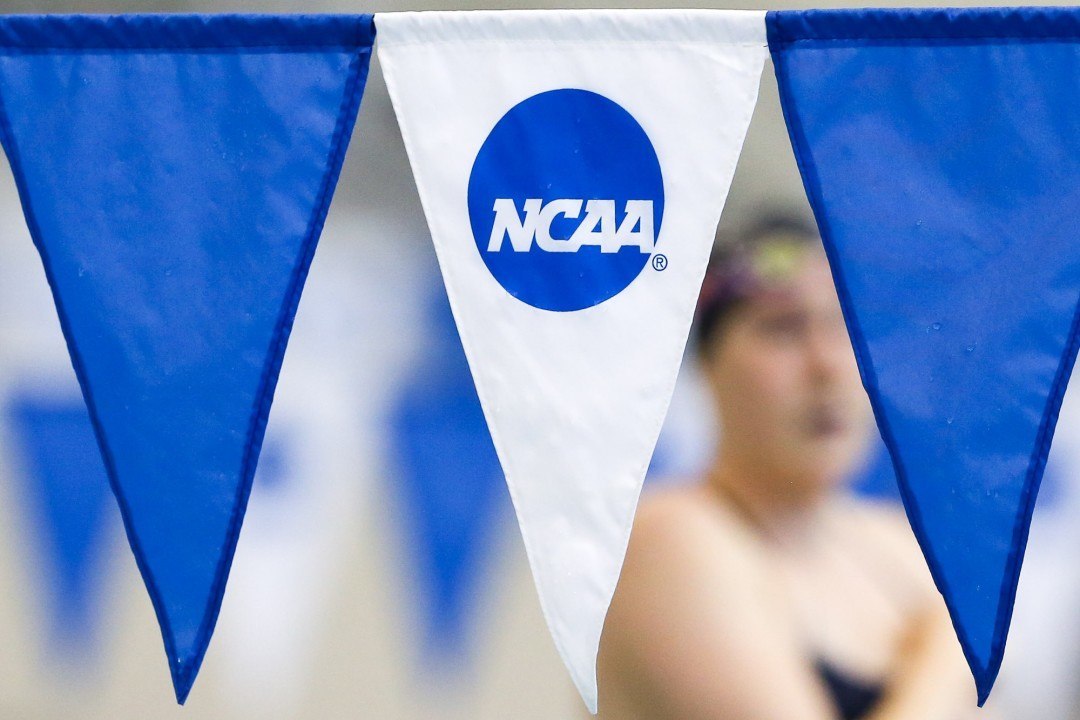 Though video review has been gradually solidifying itself as a means of aiding officials in aquatic sports for some time, the circumstances warranting video review in the NCAA concern only what happens on the starting blocks. Stock photo via Tim Binning/TheSwimPictures.com

Swimming is a pretty objective sport by just about every metric. If one time is faster than another, barring use of illegal technique or an early takeoff from the blocks, the faster time wins. But swimming, like so many other sports, is also making use of video review–though don’t expect meet officials to start crowding around a small TV monitor on the pool deck to decide if a swimmer broke out at 15 meters or slightly further. Actually, the video review rules in the NCAA are rather subtle.

Per the 2017 Division I Swimming & Diving Championships Host Operations Manual, video review is required at the NCAA Championships and other post-season competitions. While we are referencing the 2017 manual for this article, it is important to note this rule is not new and has existed since 2011.

Though video review has been gradually solidifying itself as a means of aiding officials in aquatic sports for some time–remember Michael Phelps‘s historic seventh gold medal in the 100 meter butterfly at the 2008 Beijing Olympics–the circumstances warranting video review in the NCAA are not as far-reaching. In fact, video review does not go beyond the starting blocks.

This means swimmers such as Remedy Rule, who was disqualified in ‘A’ final of the 200 yard butterfly at the Women’s NCAA Division I Championships for kicking beyond 15 meters underwater, will not be permitted to protest their disqualifications with video replay. Protests and challenges to a referee’s ruling during competition are actually not allowed, per Rule 4, Section 14, Article 7 of the current NCAA Rules book for swimming and diving:

“The referee has sole jurisdiction over the review and their decision is a judgement call not subject to further review or appeal. Only the referee and a conference or NCAA meet committee representative – with no participating institutional affiliation may view the video that is being used for review. Challenges by coaches are not permitted as part of this rule and coaches are not permitted to view the video being used at any time.”

To clarify, this is not a retraction of video replay rules by the NCAA; only an example of a disqualification outside the parameters of the current rules.

On page 31 of the 2017 host operations manual, the NCAA declares video review in swimming is “merely to determine if the electronic timing equipment has failed.” Essentially, the rule as described here is simply a method of double-checking the Relay Judging Platform (RJP) and the officials on-deck who may call a DQ.

For those unfamiliar with the term Relay Judging Platform, the RJP is the sensor on top of the starting blocks that records reaction time on the start and during relay takeovers, when the naked eye often cannot accurately judge if a swimmer jumped before their teammate’s hand touched the pad.

It is important to double-check the RJPs a facility uses with the aid of video since it is impossible to ensure all facilities use the same brand, year, and model of RJP. Though faith in the manufacturers of RJPs tends to be high, humans must keep them in good working order, and inconsistency in maintenance is a reality all meet officials must be ready to deal with.

While the widespread adoption of wedges on starting blocks has caused growing pains in the rules governing relay takeoffs, the video replay rule is not a response to the wedge’s preponderance. Use of the wedge as a means of added propulsion from the block is not permitted during relay takeovers because the wedge is not connected to the RJP. Rule 1, Section 2, Article 8 “Starting Platforms” states:

Essentially, a swimmer must do a “step-over start,” or remove the wedge from the block entirely, during a relay.

The rule further states cameras “must be aligned with a direct side view(s) of the take-off/exchange end,” and “[a]t least two video cameras capturing a maximum of four lanes each must be provided.” Additionally, time synching with the electronic timing system is not required.

The full excerpt from the host operations manual reads:

“Video review is required at the championships. The meet referee will determine when there is a need for video review based on the rules. A system must be set up before the event, must be aligned with a direct side view(s) of the take-off/exchange end, and must maintain a speed of at least 25 frames/second. At least two video cameras capturing a maximum of four lanes each must be provided. The cameras must be linked to a monitor that is at least 17” and two DVRs or TIVO systems with the ability to record, play and rewind at a speed of at least 25 frames per second. Exact framing is not necessary, nor is time synching with the electronic timing system. The result of the video is merely to determine if the electronic judging equipment has failed. When video review is used at the championships, the video clip must be saved and submitted to the NCAA, along with a statement from the referee detailing the reason for the overturned call, for archiving and review; and the equipment must then be tested to determine if the equipment is in fact faulty or if some other glitch occurred.

The video review area should be in a private space immediately adjacent to the deck, where committee and officials (at least five people) can privately review footage.”

Furthermore, video replay is to be reserved for post-season and invitational competition only, and is not allowed during duel meets that take place during the regular season. Again per Rule 4, Section 14, Article 7 of the NCAA Rules book:

“Video replay may be used at championship or invitational competitions governed by a meet or games committee composed of representatives of multiple institutions to determine if the electronic judging equipment has failed.”