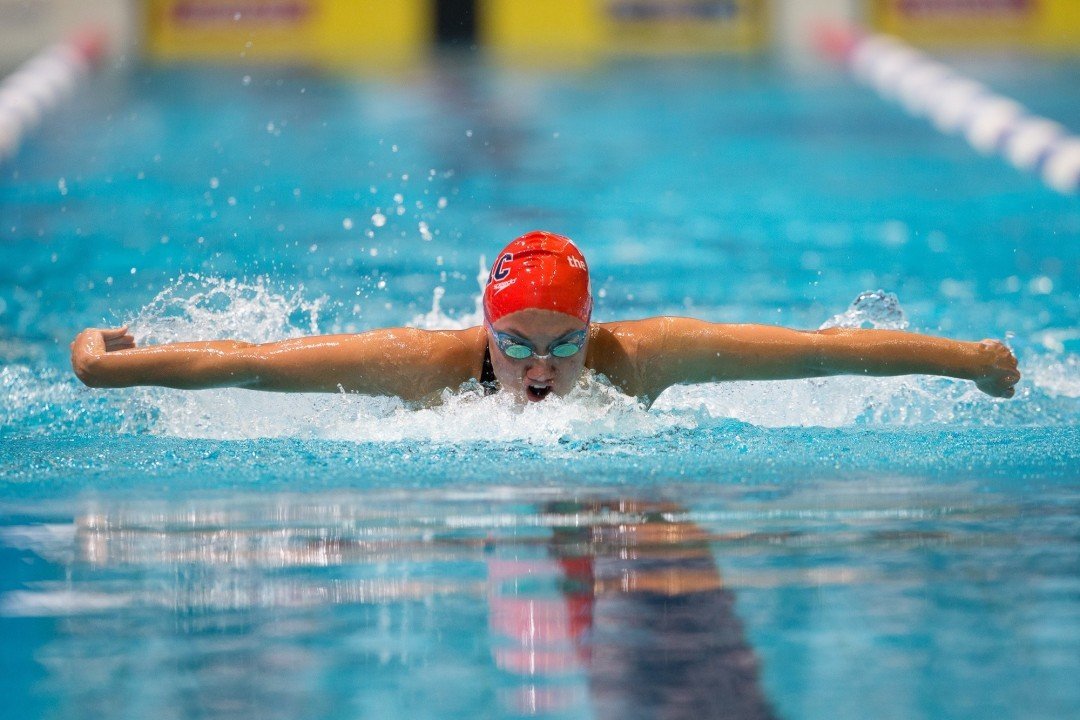 In the video above, you can see Rule’s head break the surface of the water very close to the red lines which indicate the 15m mark, and the official posted along that mark immediately raises their hand to indicate a DQ.

The USA Swimming rule book states, “It shall be permissible for a swimmer to be completely submerged for a distance of not more than 15 meters (16.4 yards) after the start and after each turn. By that point, the head must have broken the surface.”

If you have access to the archived ESPN video, you can go back and take a look at it yourself from a different angle, but again, it appears that all you can say for sure was that it was very close.

Rule touched 3rd in the race before the DQ became official, and that cost the Longhorns dearly in the team standings.  Had Rule not been disqualified, those 16 points she would have earned would have put them well ahead of the Georgia Bulldogs for 4th place.  Instead, Georgia finished ahead of Texas by a mere half a point margin, with the Longhorns settling for 5th.

I have a screen shot from the ESPN feed – her head has very clearly broken the surface within the white portion of the lane line just before the red line. So yeah, it’s close (but not really when you freeze frame it), but nonetheless, was a bad call by the official. It’s too bad that don’t allow video review for that, especially when the capability to review that call exists.

Having your foot on the line does not give one the correct angle to make the judgement cal. Should be several feet behind the mark to get a perspective and align that with the mark on the opposite side of the pool to get a clear vision. Has anyone everyone watched some people building a fence and never use a level except on the first and last post. When one goes and looks down the row of post, they are all in align and one only see the first post. Watch these workers and one will learn something. They stand away from the first post and get good visual. I believe the judge made a bad call based on her… Read more »

Correction 🙂
“If the judge was shooting at a her target, she’d miss it because of her position. In baseball, the “tie” goes to the runner.

Officials obviously have their place in the sport and it’s an important role. But I’m so tired of egotistical officials making these too-closee-to-call calls, and robbing these athletes of the moment they’ve trained all year for. It’s BS. I don’t care what team you’re for… No one should be ok with this!!! That said. It was an excellent swim. The Longhorns’ underwater a were noticeably stronger than any other team no matter what the stroke.

What is the “surface”? The water level when the pool is calm (which may be impossible for an official to ascertain during a race, thanks to waves), or a boundary where the air meets the water (which might be higher thanks to waves and surface tension)?

Only the second definition seems enforceable by on-deck officials.

M L – based on other definitions, it’s the “water level when the pool water is calm.”

Interesting, thanks. That seems hard to police precisely, especially after the first lap.

Long under waters were not as huge a part of swimming while I was competing and few swimmers I trained with or competed against incorporated this into their races the way swimmers today have. While I understand the viewpoint that a swimmer should not push the boundaries of what is legal, especially in important races, it does seem somewhat unfair to enforce a rule based on where the 15 meter location is marked off on the pool deck. The red markers on the lane lines are notably not always in the exact correct location, but they remain the only 15 meter location visually available to the racing swimmer. A better than expected start or more powerful than anticipated kicking, due… Read more »

But she knew what lane she would be in well before her swim and she could have compared her lane markings to the official 15. As I understand from a previous commenter, Remedy routinely underwaters right up to the 15m, so the fault is her own for giving herself zero margin of error.

Wait…what? Are you seriously suggesting that all swimmers should stand at the 15 meter mark on the pool deck and visually inspect where it is in as compared to the marker in the lane they are racing in? What if the 15 meter mark on the landline on the left is slightly off from the right laneline and neither is quite in line with the mark on the deck? What if at some point after warmup, while the swimmer is off deck getting suited up, a lane line gets tightened? Are they supposed to be paraded in line out of the ready room and rather than focusing on their race plan instead should focus on their lane line? These are… Read more »

One thing I noticed is the red markers for each rope is in a different position which makes it difficult to find the clear cut 15m mark. Assuming the official’s left foot in the video represents the clear cut 15m mark, I’d say she was 2-3 inches past the the official’s left foot. This may be a valid DQ but the video angle and quality still leaves it to question.

Bad call. Unless an official is CERTAIN there’s been an infraction, they shouldn’t make a call. Period.

She was past the mark. Period. Check the other videos from day 4. This angle is deceptive.

False, I watched it from the IUPUI and ESPN camera angle as well and it’s not definitive! It it was definitive, there’d be no debate. I saw what everyone else saw. It was close and that being the case, the official should have not made the call.