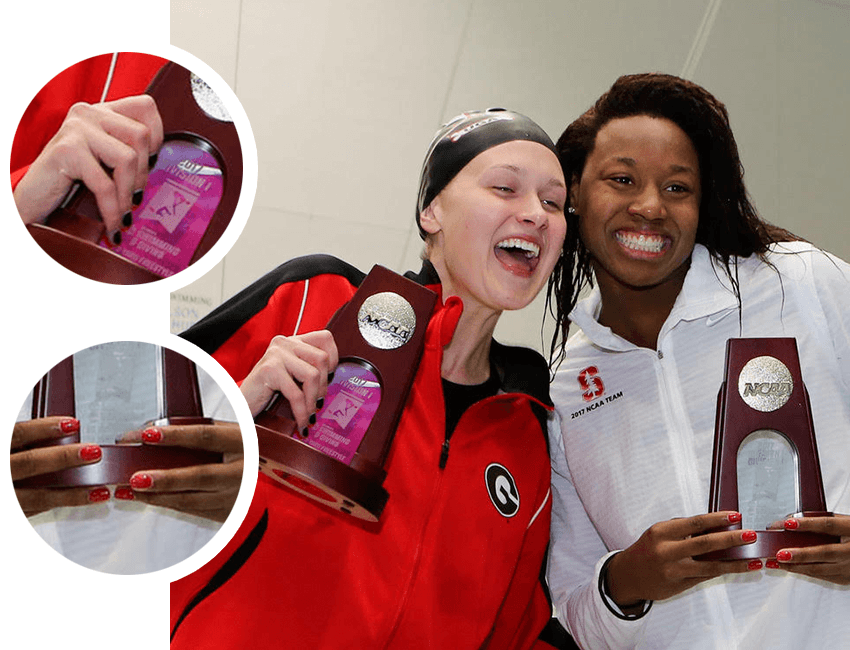 Olivia Smoliga and Simone Manuel pose with their second and first place trophies after the 50 free. Smoliga went with black, while Manuel's nails embrace the Stanford cardinal. Current photo via Tim Binning

All photos courtesy Tim Binning, and thanks to Janna Schulze for photo editing.

Many swim teams have a tradition of going to get their nails done as a way of relaxing during taper and getting hyped for the big meet, and the top college teams in the country are no exception. Manicures can serve a dual function of giving swimmers some look-good-feel-good energy going into the big race and making sure that fingernails are filed down enough to mitigate the risk of tearing a tech suit in the locker room before the race. This weekend, we documented some of the fun manicures around the pool deck at the 2017 Women’s NCAA DI Championships.

Black nail polish is in right now, and here’s another shot of Smoliga’s.

Haley Black of Auburn clearly got the message, forgoing blue and orange for some black nail polish of her own.

Valerie Hull of Cal went with a sparkly California gold.

Cal’s Kristin Vreldeveld went with a less-sparkly, shinier gold to represent the Bears.

Abbey Weitzeil of Cal went with a silver that matched her cap.

Ally Howe of Stanford went with a more sparkly silver.

And, to our eyes, Cal’s Katie McLaughlin won the nail game with a classy two-tone black and silver.

Thank you for this fun, lighthearted article! Nails are a great way these women get to express themselves since competition suits are generally pretty boring!

I don’t know about gender equality but women are superior these days. there was an article in swimswam recently about more girls participating in high school swimming than boys. Girl power. You go girl. Heeerrr.
There,s no boy power and you go boy equivalent.

And besides more girls are graduating high school while more men are keeping our prisons profitable. The girls are OK.

To be honest as a boy who swam in highschool in college. Especially in high school for a guy it is a less accepted in general body rather then women who swim it is seen in positive light. Not saying this is a big thing, but could deter some guys from straying in the sport.

Slow news day huh? This is nothing new at all. And a weak showing for the actual amount of women who prep more than just physically.

Here’s to all the NCAA women swimmers getting it done in the pool while nails and toes are on fleek.☺

Well, I guess the nail polish is water proof these days.

I don’t know if articles like this one help the advancement of gender equality in sports.

Why? Appreciate the nails, they take a lot of time and can be just as much of a personal expression as fun practice suits. I personally got my nails done with teammates as part of a tradition for Speedo Sectionals this past weekend. FYI boys are welcome too- they can benefit from a good massage and cleaning up of their toes during taper. I prefer to have my nails cut short and rounded to prevent ripping my suit and I like the contrast of a fun color against my black tech suit. Feel great, look great, swim great! It’s all fun. I personally thought this article was fun too. I remember being on deck with the Cal girls and seeing… Read more »

I like it! And there’s nothing to stop the men from doing the same if they want 😉

it has nothing to do with gender equalities ….

Of course-deviate this light hearted story into a subject that no one was even thinking of, nor does this article even remotely pertain to, and make an issue out of it. Bravo.