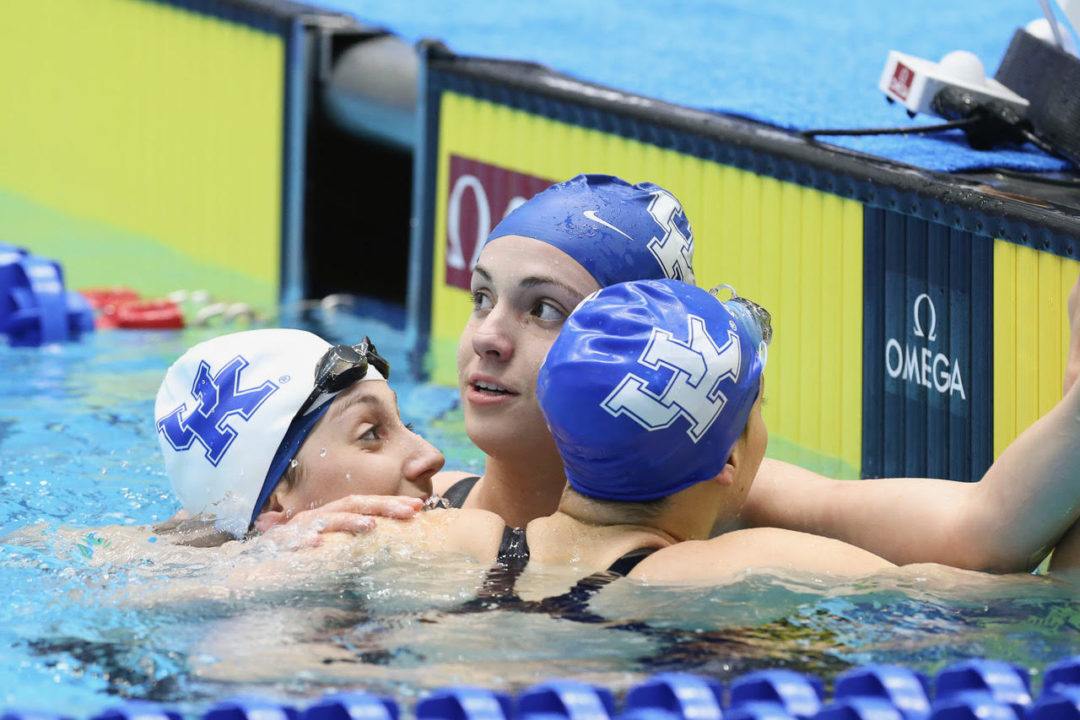 Recently we looked at points change vs the psych sheet at nationals. However, this doesn’t tell the full story of... Current photo via Tim Binning/TheSwimPictures.com

Yu Zhou of Minnesota won the Big Ten Diver of the Year award.

Recently we looked at points change vs the psych sheet at nationals. However, this doesn’t tell the full story of who swam well and who didn’t. A swimmer seeded in the top 8 who adds 2% to their seed time is captured in the points change metric, but a swimmer seeded 20th who adds 2% isn’t. Both should be included in a measure of a team’s performance, so I’ve compiled team’s average percentage time change from their seed times at the meet (this data for the previous 7 years).

As expected from the points change data, the best performing teams were Kentucky, Missouri, and Texas A&M. Kentucky led schools with a reasonable sample size by dropping an average of .23% from 23 swims. Missouri and Texas A&M each dropped an average of .09% from their seed times. None of the other top schools dropped time on average. Stanford added .31%, California added .3%, Georgia added .2%, and Texas added .16%. The worst performing big teams were both from Los Angeles. USC added an average of 1.33% and UCLA added 1.23%.  The field as a whole added time in line with the historical average. The average time change over the last 7 years at this meet was an add of .45%. This year swimmers added an average of .43%.

Negative is faster, positive is slower. This matches the “dropped time,” “added time” style of talking about performance

Biggest Drop and Add for Each Team

Sorry–team point improvement is a more accurate gauge of championship season success. Individual time drops are relative to a swimmer’s development (experience, which meet is targeted, etc.). Point total improvement reflects coaching strategy–how they prepared their potential point scorers for team success at the national level, and how the swimmers executed on the plan.
In this metric, a team can actually appear less successful for getting a bunch of swimmers qualified at the conference meet (if non-qualifiers cut a ton of time at their conference meet, then swim slower at NCAAs, they appear less successful). Because context isn’t considered, it turns what is logically seen as a positive into a negative. For individuals it might have some value, but… Read more »

Most accurate objective gauge of championship season success = actual points scored (ie, team placing / event placing). Everything else is just a personal goal (which is perfectly legitimate, but measurable by you alone) or mind games (which is a complete waste of everyone’s time).

This is interesting, but because of total subjectivity in the sport, I’m not sure it is quite as applicable. It might be more predictive to average dive lists for participating athletes from their final dual meet, conference and Zone dive lists (approximately 5 in total), then place them. Greater high level sample size is definitely more predictive of result.

To be clear, was not trying to gauge a “performance vs seed” analysis for diving. The forecasted team scores based on psych sheet which were presented excluded any assumptions for diving (a significant limitation if you are really interested in final team placing). What I just shared was simply a test to see if you could improve the accuracy of the forecast if you layered on expected scores for diving based on zone diving scores. It appears to me that this in fact yielded useful results — there may be (probably are) better methods, but I haven’t seen any put forward to this point.