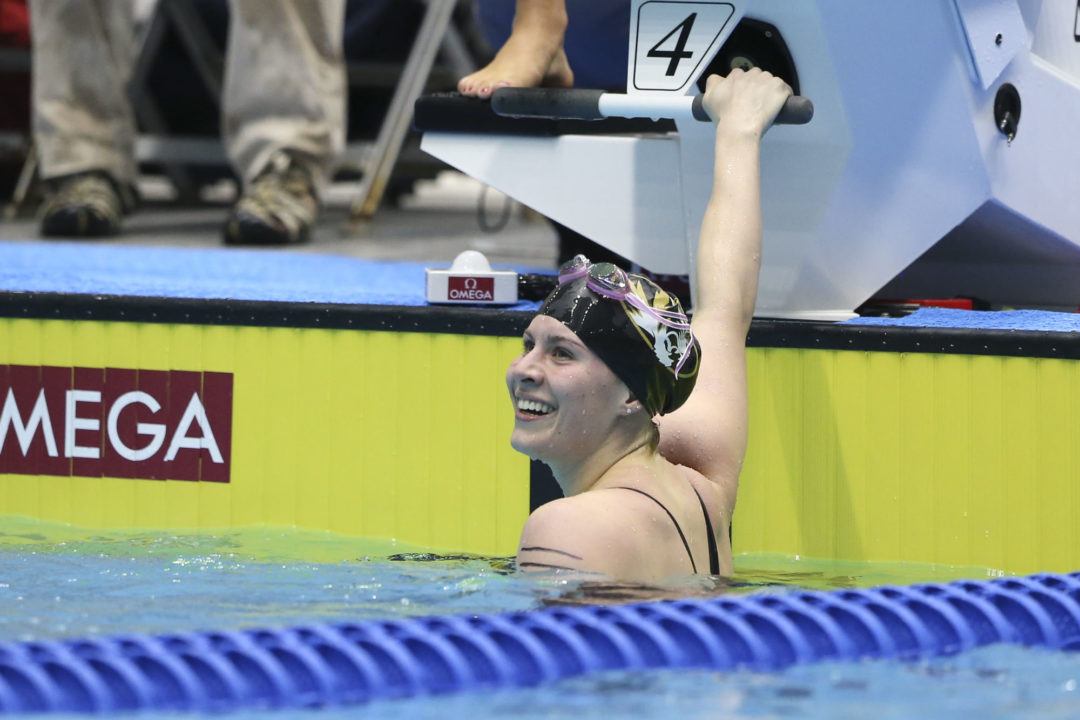 With both NCAA Championships now in the rearview mirror, it's time for everyone's favorite game of "hindsight is 20/20." We look back at our final team predictions to see who over- and underperformed our expectations. Current photo via Tim Binning/TheSwimPictures.com

When we published our final predictions, we split the teams into some relatively arbitrary tiers, with the idea that the teams in each tier had some commonalities and could fairly easily shuffle around within their tiers, though it would take a bigger performance to actually jump to the next tier of teams. That’s how we’ll break down the risers and fallers, showing which teams stayed within the places we had assigned to their tier and which teams jumped into a placing designated to a different tier.

These teams rose out of their tier:

These teams rose within their tier:

Missouri was easily the most impressive team relative to our picks. The Tigers did get 18 diving points, but the big difference was Nadine Laemmler, who entered the meet seeded outside of scoring range in both her events, but wound up making the 100 back A final, then sneaking into the 200 back B final in 16th and finally winning that B final for 9th overall. That earned her 21 points over a projected zero. Mizzou’s medley relays also did extremely well relative to seed.

Kentucky almost doubled their points compared to seeds, with Asia Seidt doing a lot of the heavy lifting. It’s worth noting we had both Mizzou and Kentucky in a tier that emphasized potential relay points, and that’s where both programs did most of their ladder-climbing.

Mallory Comerford pulled off the upset some considered impossible in beating Simone Manuel and tying Katie Ledecky in the 200. She was also a relay beast as Louisville rose dramatically. We slept on Minnesota’s divers, who scored 95 points between the three of them, but we also didn’t account for a big meet from freshman Lindsey Horejsi, who about doubled her projected individual points.

Texas was a classic case of us relying too heavily on past years’ results. Since 2010, the Texas women had a very marked trend of gaining time at NCAAs. We noted in our final predictions that Texas’s tier had the best potential to rise, and Texas did just that, with almost every swimmer exceeding their seeded points and the team holding their 5th-place spot from the scored psych sheets.

Texas A&M‘s rise was half a great effort on their part to leapfrog Georgia and half the Aggies taking advantage of a flat USC showing after we picked USC #4.

These teams dropped outside of their tier:

These teams dropped within their tier:

USC struggled, with most swimmers failing to hold their seeded places. Riley Scott went from two top-8 breaststroke seeds to finishes of 14th and 16th. USC was always seeded a little high, sitting 3rd in our scored psych sheets, but we underestimated how high (plus we missed predicting great performances from Texas A&M and Texas).

Missing the scoring heat of the 200 medley relay hurt Virginia, especially with two DQs in the B final meaning any team that finished the race was guaranteed at least 6 points. Arizona was able to match their relay times from midseason, but didn’t improve them significantly, and the field went by them a bit.

Tennessee  hit some unexpected adversity in star sprinter Maddy Banic being taken away in an ambulance midway through Friday finals. She slid down the ranks a little in her 50 free the night before and missed out on a scoring swim in the 100 fly with that medical situation. Tennessee also DQ’d a relay in a tough showing.

Diving killed us on these three. We had no idea just how good Olivia Rosendahl (31 points and an NCAA title) would turn out to be for Northwestern. Purdue scored 29 of its 33 points on the boards. Miami scored all 29 points in diving with Pei Lin.

I truly enjoy SwimSwam’s ability to find new and interesting ways to look at championship meet breakdowns. Thank you!

It’s puzzling why the USC Women had such a disappointing NCAA championship meet when they had a reasonably good Pac-12 meet as well as 10+ invited swimmers who met qualifying standards. With USC chasing Pac-12 rivals Stanford and Cal in recruiting and in marks in the pool, hopefully Salo can have the team move beyond the “big droppers” category and join Stanford and Cal in the “nailed it” category. At least the USC men would appear to be in the “big risers” category.

Dylan Carter’s interview was interesting. He said something to the effect that the recent history has been one or the other gender teams does well at NCAAs. With the women doing poorly, the USC guys were psyched that it was their turn to do well. Some programs (USC and Florida) just didn’t get it right with the women, but the men did well.

A clearer explanation emerges about why USC Women entered the NCAA championships forecasted #4 but dropping 5 places to #9 in the meet. From the USA Swimming school performance list, it appeared that USC peaked at the Pac-12 champs in late February because only 2 of USC’s 14 invited swimmers (Mann and Hayward) improved times at the NCAA meet a few weeks later.
USC entered the NCAA meet with 14 invited swimmers (not including divers) and 27 individual events. Not included on USC invitees was All-American Chelsea Chenault. Stanford had the same number of invited swimmers – 14 and a higher 35 individual events. Cal had 13 invited swimmers in 33 events. Needless to say, Stanford and Cal did… Read more »

I wonder how many of those 14 had NCAA cuts before PAC 12’s. If they had to rest to make sure they qualified, it’s hard to bounce back and swim well again at NCAA, especially with PAC 12’s so late. Other than Cal and Stanford that presumably had a lot of their swimmers qualified before PAC-12s, PAC 12 schools in general underperformed–Arizona, Arizona State, UCLA, and USC.

Minnesota moved almost entirely because your predictions didn’t give them any credit for their superior diving (>90 points!)

The Grand Inquisitor – that’s pretty much exactly what we wrote in the story above. I remember slotting Minnesota in for about 60 or so diving points, but also didn’t account for the freshman Sarah Bacon, who finaled on both springboards.