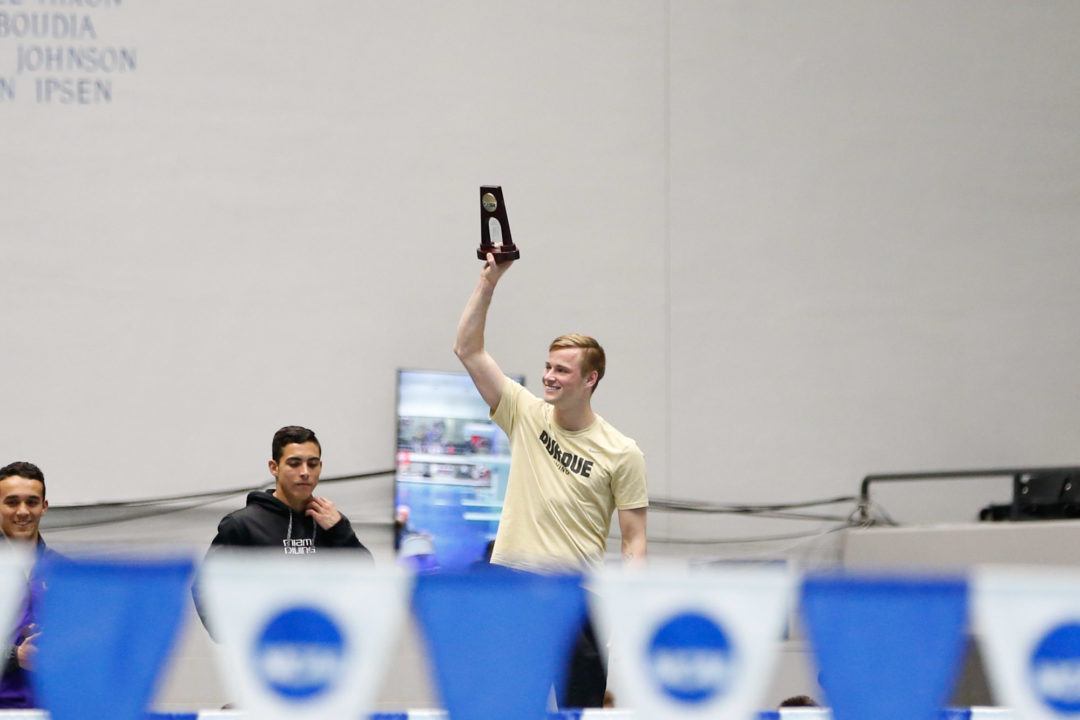 With both NCAA Championships now in the rearview mirror, it's time for everyone's favorite game of "hindsight is 20/20." We look back at our final team predictions to see who over- and underperformed our expectations. Current photo via Tim Binning/TheSwimPictures.com

Here what the stars, both athletes and coaches, had to say about a whirlwind week of college swimming in Indianapolis

When we published our final predictions, we split the teams into some relatively arbitrary tiers, with the idea that the teams in each tier had some commonalities and could fairly easily shuffle around within their tiers, though it would take a bigger performance to actually jump to the next tier of teams. That’s how we’ll break down the risers and fallers, showing which teams stayed within the places we had assigned to their tier and which teams jumped into a placing designated to a different tier.

These teams rose out of their tier:

These teams rose within their tier:

We actually gave Purdue a pretty sizable bump from the scored heat sheets to account for returning diver Steele Johnson. But we completely underestimated the rest of the Boilermaker dive corps, which combined to score 94.5 points. Johnson accounted for 57 of them (right within the range we projected for him), but the other 37.5 points rose the Boilermakers eight spots from our final predictions.

As with the women, Missouri was among the most underrated teams by our final predictions. Mizzou is going from a fast regular-season team to a true NCAA contender. The team actually weathered several of its top swimmers scoring less points than projected on psych sheets (Fabian Schwingenschlogl dropped from 34 to 17, Andrew Sansoucie from 14 to 12) but made up the difference with an absolute monster of a meet from Michael Chadwick (36.5 scored points after just 21 projected) along with Carter Griffin finally coming around (3 seeded points to 13 scored). The Mizzou medley relays were key, as well.

For Texas A&M, Mauro Castillo went from 2 non-scoring seeds to a 3rd-place finish and 23 total points. Divers Tyler Henschel and Sam Thornton chipped in 34 points we didn’t fully account for.

Within the top 10, Stanford had a great meet and benefitted from a rough showing from Indiana (more on them below). Same goes for Florida, who impressed both in relays and had Mark Szranek pull out a surprise NCAA co-title in the 200 IM.

These teams dropped outside of their tier:

These teams dropped within their tier:

Our big miss here was Indiana, who were seeded to score 291 points without diving, which wound up accounting for 62 total points. But IU actually wound up scoring just 229.5. The Hoosier swimmers almost all went backwards: Vini Lanza (seeded to score 38, scored 21), Blake Pieroni (seeded 33, scored 27.5), Ian Finnerty (seeded 29, scored 0), Marwan el-Kamash (seeded 21, scored 12) and Ali Khalafalla (seeded 14, scored 6). That’s not totally fair to Pieroni, who had an excellent meet, but overall, it looks like the Hoosiers took a little more out of the bank than we anticipated to win their first Big Ten title in years.

Fellow Big Ten team Ohio State dropped a long way when 44-second flyer Matt McHugh slipped into the 46s in prelims. He never really recovered, and scratched the 100 free the next day to focus on the 400 free relay. Also dropping the Buckeyes: seeded scorers Jack Barone, Josh Fleagle and Noah Lense all failed to score individually, and diving wasn’t enough to overcome that loss.

And elsewhere in the Big Ten, Michigan scored only one relay and sprinter Paul Powers just wasn’t himself as the Wolverines dropped out of the top 15.

Virginia Tech‘s two scorers (Brandon Fiala and Robert Owen) weren’t far off their seeded scores, but did lose a few points. Our prediction expected at least one of VT’s four divers to score in the meet, but none did. That explains much of their drop in this list.

We were probably a little too high on Arizona State, predicting them 10th when their best asset was unproven freshman Cameron Craig. Craig delivered in the 200 free, but naturally moved down a little from what was definitely a lofty incoming seed.

We also predicted a big showing from Shane Ryan of Penn State, but he fell way off the mark, particularly in the 50 free. Same thing goes for UNC’s Henry Campbell, who got hit with a 17th in the 400 IM after coming in with the 7th seed.

Miami is a diving-only program, and we didn’t realize how good Platform champ David Dinsmore would be. Notre Dame just plain had a nice meet. The Irish had nice time drops to score in two relays, and actually would’ve moved up had they not DQ’d a third scoring relay.

We even noted in our final predictions that Texas and Cal felt pretty locked in up top. Texas had the meet won by Friday morning and Cal even survived three scoring DQs without missing second.

Some of these being spot-on are just dumb luck – we knew what tier these teams would finish in, which narrowed things down pretty considerably. Auburn at 12 is interesting, given the other teams in their tier either moved way up (Missouri) or way back (Ohio State and Michigan) while Auburn held completely steady to our prediction.

What the heck happened to MI this yr??? Not 1 relay made finals. Maybe they are missing having coach Mark Hill?? Seems men’s team going bkwd & women’s team rising!!

With all due respect, maybe next season you confer with an actual diving person, that could have seen that one coming, when making your predictions. It’s like having a diving person handicapping the swimming psych sheet and not realizing the depth after the top studs. Depth wins, you all know that. Not trying to start anything just pointing something out. Keep up the good work! Love the site!!!

Agree. All swim and dive team ranking are based on swimming only. Pretty much knew Purdue would be top 20 all year but never even mentioned in top 25. If they only had a decent swimming portion. Coaching issues?

Meeeee – we did factor diving into our final predictions, if you check out our write-ups from that post. Interestingly enough, we projected diving about as well as we did swimming. The only men’s programs we “missed” on with our projections solely because of diving were Purdue and Miami. Because of the subjective nature of scoring, diving is much harder to compare Zone-to-Zone, even for us, who have been covering diving all year.

Thanks. I guess i meant throughout the year. And wasn’t speaking to just Swimswam. I do understand the difficulty but there are powerhouse diving programs that consistently get their team into the top 20. I think Purdue has been there based on diving for at least the last 4 years. This might be the only year of those 4 where they actually got some swimming points. Again, swim coaching seems to be a real issue there. Great, great facilities….great, great school, great, great state for swim recruiting as well as surrounding states….and they don’t get the job done.

If West Lafayete Indiana can be a destination for diving…diving (a warm weather sport). Swimming can be amazing as well.

Purdue had a scorer in the 200 breastroke. Their head coach, Dan Ross, is one of the most respected college coaches in the country with a 31 year tenure as head coach.

Did anyone else that all individual swimming titles went only to Texas, Florida and Cal? At least Miami broke the Purdue monopoly in diving and NCSU broke the Texas monopoly in relays. Funny.

and technically Szaranek (Florida) with a shared title in the 200 IM. Had Murphy turned pro last summer, Cal would have dropped off that list (and Texas would have taken two more events…and left Dressel and the IM’s as their only “holes”).

I think ASU was fairly hyped, it just became apparent early on at NCAA’s that ASU did a full taper for PAC12’s and had a tough time holding that taper all the way to NCAA’s. The whole team really nailed pac12’s. It’s going to get harder and harder for schools to not taper for their conference meets since getting an invite to NCAA’s is so difficult.

it looks like uga had the biggest fall in your rankings!