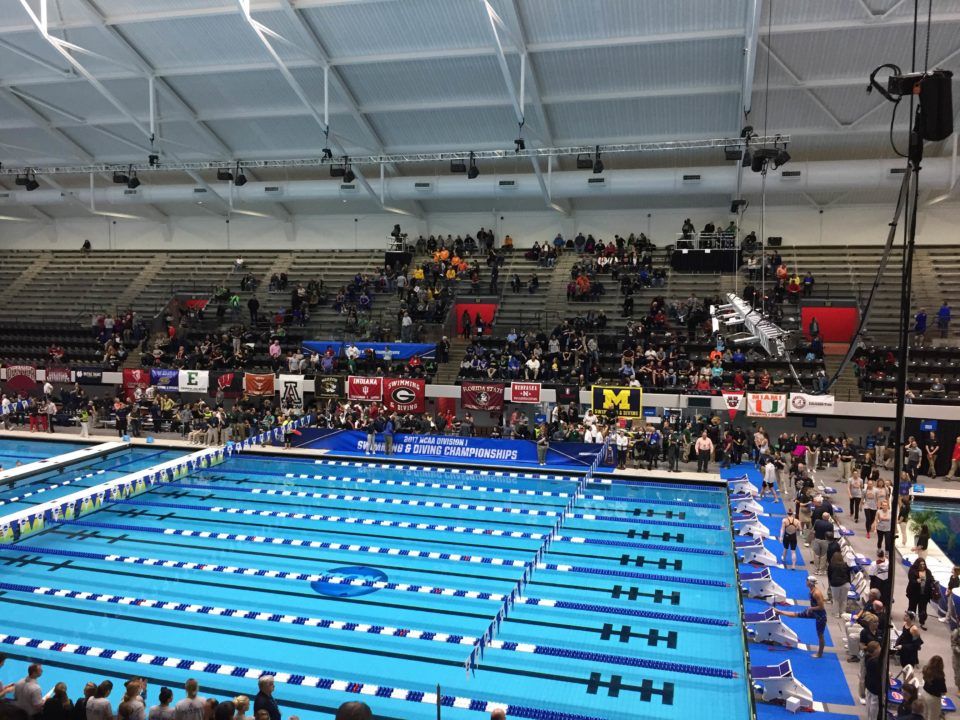 This weekend at the 2017 NCAA Women’s Division I Championships in Indianapolis, the stands were a little… empty. The feeling that something was missing filled the IUPUI Natatorium, especially for spectators, swimmers, and reporters whose last big-time, national-level meet was the 2016 U.S. Olympic Team Trials in Omaha.

The 2016 U.S. Olympic Trials sold out, with ticket sales eclipsing 200,000 for the 15-session meet. And, though Trials is obviously a bigger and higher-profile meet, Trials ticket sales prove that American interest in the sport remains at its all-time high, and that Midwestern swim fans and fans willing to travel to the Midwest can fill even an entire CenturyLink Center of seats.

However, the IUPUI Natatorium is huge, with seating capacity to fit 4,700 spectators, so even the second-biggest spectator field in history felt like an underwhelming crowd. But this isn’t a unique situation for an IUPUI competition; any veteran of top-level meets in Indianapolis will tell you that the stands are at most 50% full at any point.

The emptiness of the massive facility sucks up some of the competitive energy that thrives in smaller, but still top-flight aquatic centers like those at the University of Minnesota (1,346 seats) and Georgia Tech (1,900 seats). The emptiness may or may not affect swimmer performance, but it definitely does make for a tamer spectator experience. As a onlooker at the IUPUI, you feel farther away from the action, and some of the excitement and cheering can get lost in the big facility.

You can see shots of the crowd on the lane one side right before the start of Friday night finals below. There are more crowd members on the lane eight side of the pool, underneath the photographer’s vantage point. (The first heat of 400 IMers is standing behind the lanes, so the first event is just minutes away.)

I’m a local and have an age group swimmer. We went to the APS and he loved that, and figured we would watch both men and women at the NCAAs.

The ticket website was a joke and when I tried to get ladies tickets the site didn’t even work. I reached out to our club to see if there was a group purchase offer but no one was aware of it, and so we had to pass.

We were planning on going Friday but I’m still having difficulty getting tickets (I’m on a Mac, but have tried two different browsers) and am just at the point now that we’ll go see a movie for the last day of… Read more »

We played hooky on Friday to go see prelims and finals and it was one of the most memorable sessions we’ve ever seen (especially that 200 Free final). We were also in Omaha this summer and while NC’s didn’t have the same production value as USA Swimming’s super bowl, The IUPUI Nat always brings a majestic presence that amps up the participants for epic swims. I say great job Indy, where all great racers go! It’s the Vatican of pools, second to none.

It’s funny that you only show one side of the Natatorium. The opposite side was completely full. As a spectator, I thought that the facility had quite a good crowd.

A better analogy than the Ohio state vs Wisconsin game would be the Harlem Globetrotters vs the Washington Generals. You knew who was going to win when you walked in the door. Also, all foreign athletes should be included in my list of “exhibition only” swimmers. However, they should not be allowed to receive scholarship dollars. If they want to pay their way and be trained by some of the top coaches in the world then represent their home country for international competition, no problem. Just don’t play both sides of the court, exhibition only in NCAA.

This was a great event. The SEC Championships meet at Tennesse this year was a joke. Clear bags, no cameras, and staff just plain out rude.

This was not a competition this was en exhibition. How many people would attend a basketball game if it was known in advance which team would win, the only question would be by how much. Imagine the headline in the papers before the game, “Ohio State will beat Wisconsin tonight, the only question is will it be by 10 points or 20 points”. How many people would show up? Not too many. This was billed as the biggest swimming competition of the year. Every other sport literally PACKS the stands for their biggest event of the year. Stop making excuses and face the fact. Watching pre-determined outcome sports events sucks.
NCAA has a lot of problems with this sport… Read more »

I think there are two issues in your post that have to be discussed separately: 1. The NCAA’s system, rules, targets etc. and 2. What makes sport event attractive.
1. I’ve never been involved with NCAA in any way, but I know that very few swimmers consider swimming in college as just another step toward professional career. Mostly because this sport is too hard and too short in time to make substantial living. Regardless any objections I believe that most of college swimmers go to the college for education. And this factor finds some reflection in NCAA life and rules. It is not a professional league where the major concern is to make this show business as much attractive… Read more »

This picture of empty stands is misleading. On the opposite side of the pool there were practically no available sits even in the morning sessions. Chears were always taken and bench were more than 70% full. On weekend there were even more people. At the same time I have to admit that there weren’t many people like me who weren’t associated with one or another team and came there just to enjoy the exiting swimming competition.
And of course there wasn’t large crowd around warm-up pool.

It is so difficult for college swimmers to make the cuts for this meet. If they want to increase attendance they might want to make it a tad easier so that more families attend. It is too costly for students in particular to fly to another city to watch the meet they would love to see especially when they have to miss classes as well.