Could Step-Over Starts Be Causing Relay DQs At SECs? 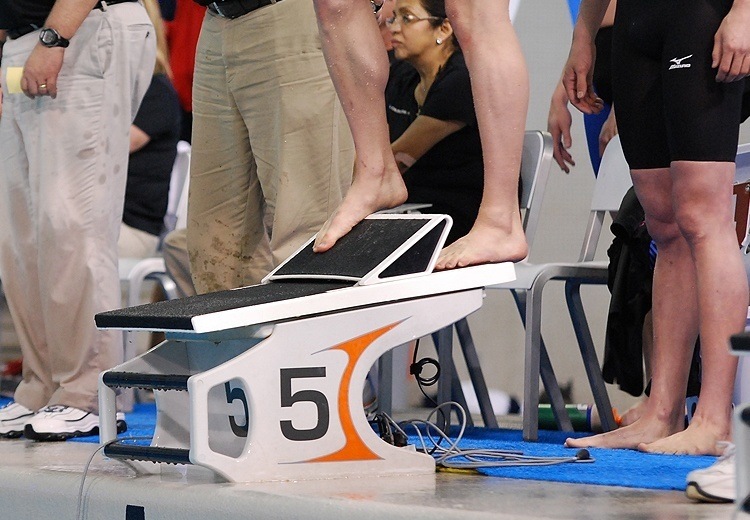 Certain coaches at the SEC Championships believe that the step-over start (originally created by Texas which you can read about here) is creating a situation where despite clean relay takeovers, swimmers are being disqualified due to the reaction judging pads thinking that they left early. Archive photo via Janna Schulze/SwimSwam.com

In the women’s 100 fly final tonight, the youngster tore to a lifetime best, finishing 3rd in 57.27.

At least one SEC coach has speculated that the step-over relay start (originally popularized by Texas which you can read about here) is creating a situation where despite clean relay takeovers, swimmers are being disqualified due to the reaction judging pads thinking that they left early at this year’s SEC Championships.

Although it’s just speculation, the belief is that the Relay Judging Platform (RJP) is recording swimmers leaving earlier than they actually are due to position of the foot; most likely the step foot leaving the front of the block an instant before the wedge foot does, or the front foot not registering at the front of the platform.

While there’s no proof that this start is causing the false readings from the pads, there is video evidence of disquadlified relays that appeared to be safe but show negative takeovertimes from the RJP.

Beginning with Wednesday’s preliminary session, the RJPs were turned off at the meet for both individual and relay swims. No relays were disqualified in the men’s or women’s 200 free relays on Wednesday evening.

As of now, the following relays have been disqualified at the SEC Championships

Or maybe they actually left the platform early! If the proposed theory is true, the delta would be extreme. The DQ’s are a couple tenths of a second at most.

With this decision to disable the devices, the SEC teams successfully gained an advantage over other conferences for the remaining relays. The NCAA should consider disallowing these times for NCAA entries.

I think it’s a combination of issues. I think the incompetence of the University of Tennessee’s aquatic staff should also be blamed. The staff is using hand held iPads on deck as a source of video review. The staff never stand in the same position and make it difficult to judge every lane with varying angles. Sometimes standing behind the end of the pool! When the system misfires, like what is described, they recall the iPads which don’t provide an unbiased angle of the exchange. After the first night debacle the staff have ruled out use of the system and officials are doing all of the DQs by sight. Multiple teams are left with glaring point deficits. Is this fair?… Read more »

How can it even be possible? “most likely the step foot leaving the front of the block an instant before the wedge foot does”

Seems to me with forward movement that would be impossible without causing something awfully funny looking! Think about it…

is there any chance of these DQs getting overturned? Missouri’s dq seems to have gutted them

Possible? Yes absolutely. This is why you need High Speed Video to confirm the DQ.

Is it possible to remove the wedge after the lead-off swimmer starts?

I have never used the starting wedge, so I do not know how easy they are to move.

tea rex – some are easier to remove than others.

Is it venue specific, that is, dependent on the type of wedge? Quoting form the Pre-Championship Teleconference memo it would appear that there is no rule to prevent removal during relays.

“Starting Blocks/Wedges/Ledges:
All of these items must be identical for all lanes. They cannot be different. If using the track style ledges that can be removed from the block, there should be information presented as to the procedure for removing and replacing the wedges (especially during relays) and who will be doing this.

There is no rule preventing wedges from being removed during individual legs of relays.

When using backstroke ledges, they must be identical in all competitive lanes. There should be a protocol for who will be… Read more »

This was meant to respond to ACC Fan.

That must be new for this year. Within the last couple of years, I was sure it was restricted! Thanks for confirming.
It should be a requirement to remove if they are at fault for the relay DQs (unless they add sensitive pads to the wedges).

This used to be allowed, but a couple years ago they restricted the removal of the wedge during the relay. The rule is now you must use the wedge for all four swimmers or none at all.

Sometimes I wish that instead of entirely DQ’ing relays (where a team can lose 50 points in 1/10th of a second), if a relay swimmer leaves early, multiply the negative reaction time by 10 and add it to the relay’s time. So if a relay goes 1:35.00 but one swimmer had a -0.08 reaction time, their final time is scored as 1:35.80.

That’s still a pretty steep penalty, but seems more fair than scoring zero points in a conference final where even last place is guaranteed 30+ points.

Nah, that’s bad. Like BaldingEagle’s post outlines, it should be a mix of judges and electronics that determines it.

The reason they are disqualified is because it is just plain unfair that they got off the block before they should have. In a relay, if a team is ahead, it creates a completely different outcome for the swimmer in the water (they will likely swim A LOT faster). If a swimmer has mastered their take off so that they have a 0.00 differential, then that is their risk to take. There is no reason why a swimmer can’t be a bit more safe if they aren’t used to exchanging with the swimmer in the water.