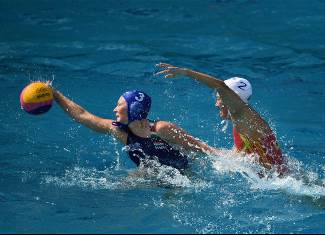 China fell to Italy in the quarterfinals of the women's water polo tournament in Rio on Monday. Archive photo via rio2016.com

The Italian women’s water polo team remained undefeated on Monday as it downed China 12-7 to move on to the semifinals in Rio. Arianna Garibotti gave Italy a 1-0 advantage with 4:57 left on the clock. China’s Zihan Zhao tied the game at 1-1 late in the quarter.

Italy outscored China 3-1 over the next 8 minutes. Guilia Emmolo put Italy up 2-1 with 5:35 left to play, then got another shot past goalkeeper Jun Yang in the last couple of minutes of the quarter. Between her two goals, teammate Roberta Bianconi scored for Italy. Cong Zhang closed the gap, finding the back of the net with 55 seconds left to play. The teams finished the first half with Italy ahead 4-2.

Zhang opened the third quarter as she’d closed the second, tallying another goal for China. From there Italy scored two in quick succession, as Bianconi and Federica Radicchi each landed goals. Huanhuan Ma narrowed Italy’s lead to two with a goal with 4:35 left in the third quarter. Italy very quickly added two more points on goals from Garibotti and Tania Di Mario. Italy led 8-4 at the end of the third period.

The fourth quarter began with a power play goal from Di Mario to put Italy up 9-4. China then scored twice within a minute on long shots from Ma and Zhao. Bianconi made it 10-6 to Italy with a penalty shot with 4:49 left to play. Zhang added one more for China 10 seconds later, but Italy shut it down with two goals in the final minute from Teresa Frassinetti and Rosaria Aiello. When the clock ran out the score stood at 12-7 in favor of Italy.

Italy will continue on to semifinals on Wednesday, where they will face the Russian Federation. China is out of medal contention, but will play against Spain in the next round.