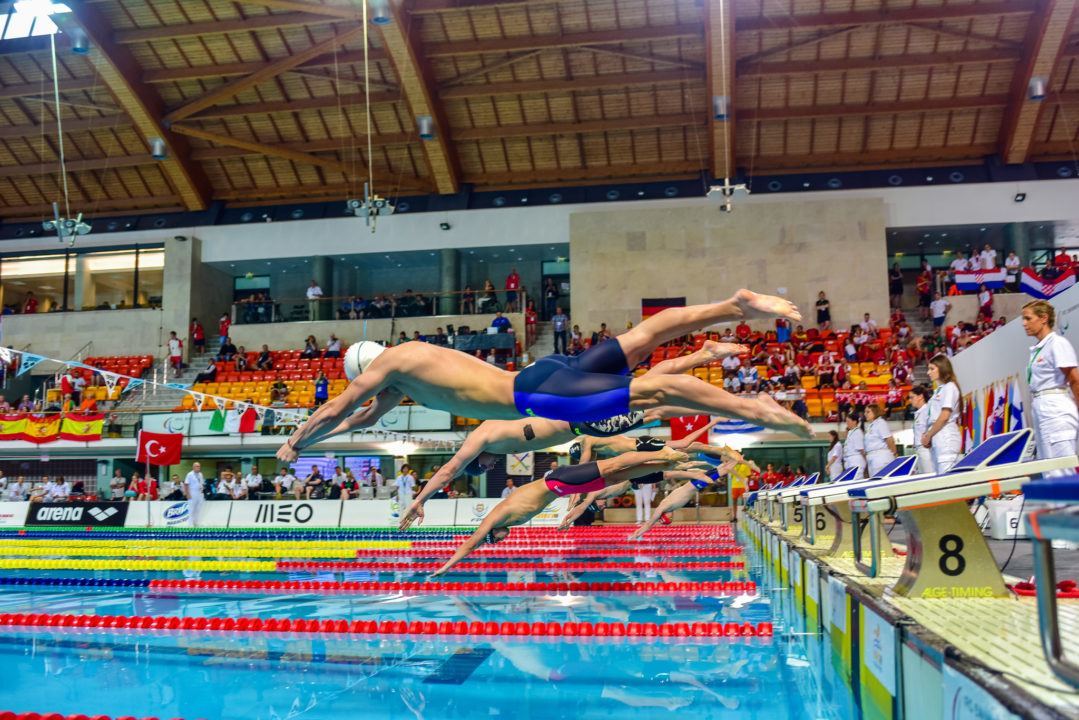 An astonishing nine world records peppered the pool at the 2016 IPC Swimming European Open Championships on Wednesday (4 May), as athletes continued to grab titles on their road to the Rio 2016 Paralympic Games. Current photo via IPC Swimming/Pedro Vasconcales

An astonishing nine world records peppered the pool at the 2016 IPC Swimming European Open Championships on Wednesday (4 May), as athletes continued to grab titles on their road to the Rio 2016 Paralympic Games.

Ukraine’s world champion Anna Stetsenko (58.05) was pushed to her new world best in the women’s 100m freestyle S13. Third on the turn, Stetsenko had to explode into the last 25m to bring down her own previous time of 58.72. Russia’s Darya Stukalova (58.93) and Great Britain’s Hannah Russell (59.32) were second and third respectively.

Sweden’s silver medallist from 2014, Maja Reichard (30.87), lowered the world record in emphatic style on her way to gold in the women’s 50m freestyle S11.

“I had no idea that I could go so fast, I was just like ‘I want a medal and I’m going to swim as fast as I can,” an ecstatic Reichard said. “And then I heard everybody screaming and I thought ‘ok someone did something really, really, good’ and I didn’t recognise it was me! I am so happy!”

There were four world records in one race in the women’s 100m backstroke S2.

“I am happy with my timing, and I think I am making good progress towards Rio and I’m very excited about Rio,” Yip said.

Russia’s Dmitrii Kokarev put everything he had into the men’s 100m backstroke S2, winning his second gold and retaining his title in a new world record time of 2:02.25. The new mark was more than two seconds inside the former best of China’s Yang Yang set in 2015. Ukraine’s world champion Serhii Palamarchuk (2:06.47) also swam within the European record time for silver. Greece’s Aristeidis Makrodimitris (2:11.23) was third.

Yip went on to set a new Asian record in the 100m freestyle, also bettering the 50m S2 mark.

Another gold and world record came for Ukraine in the men’s 100m backstroke S1. World champion Hennadii Boiko (2:23.75) shaved more than four seconds off his own best from the last European Championships in 2014.

Italy’s Federico Morlacchi took his second gold of the week in the men’s 200m individual medley SM9. Leading throughout the race the world and European champion touched in at 2:18.39.

“It was better than yesterday [gold in the 100m butterfly S9], maybe because of the pressure and the butterfly is my favourite race,” Morlacchi said. “And I enjoyed here the individual medley. I am ready for Rio, I feel ready.

Soto was also part of the winning women’s 4x100m freestyle relay 34 points team, putting in a stunning last leg to touch the wall in 4:34.68 alongside Teresa Perales, Gascon and Isabel Yinghua Hernandez Santos.

Paralympic, world and European champion Yevheniy Bohodayko (1:22.85) just had the edge on Colombia’s Open silver medallist Nelson Crispin (1:23.00) and Germany’s Torben Schmidtke (1:23.77) in the men’s 100m breaststroke SB6. There was nothing to separate the trio for the majority of the final 50m, but Bohodayko had the stamina to touch for gold. Norway’s Andreas Skaar Bjornstad (1:26.45) completed the European podium.

Nina Ryabova (1:07.48) swam close to the European record in the women’s butterfly S10. The Russian, who set a new world record on Tuesday (3 May) in the women’s 50m freestyle S10, was just 0.12 seconds away from the regional best to take gold. Poland’s former European champion Oliwia Jablonska (1:09.08) was second ahead of Spain’s Isabel Yinghua Hernandez Santos (1:10.62).

World champion Denis Tarasov (1:01.76) had a close race with France’s European gold medallist Charles Rozoy (1:01.95). The face-off ended with gold for Tarasov, just 0.19 seconds ahead of Rozoy, for his third title of the week. Denmark’s Niels Korfitz Mortensen (1:05.74) took bronze.

“I’m happy with my time, we had trials last week and I’m not far off my PB [personal best] so I can’t complain about that swim there too much,” Quin said.

“That’s me done now. I’m basically a one trick pony!” he joked.

Colombia’s Moises Fuentes Garcia (1:36.83) beat Brazil’s world and Paralympic champion Daniel Dias (1:38.08) to the Open title in the men’s 100m breaststroke SB4. Dias tried to come back against the Colombian in the dying moments of the race, but he left it too late. Spain’s Ricardo Ten (1:39.81) kept his European title and sealed Open bronze. Greece’s Antonios Tsapatakis (1:40.38) and Russia’s Dmitrii Cherniaev (1:41.58) were second and third respectively on the European podium.