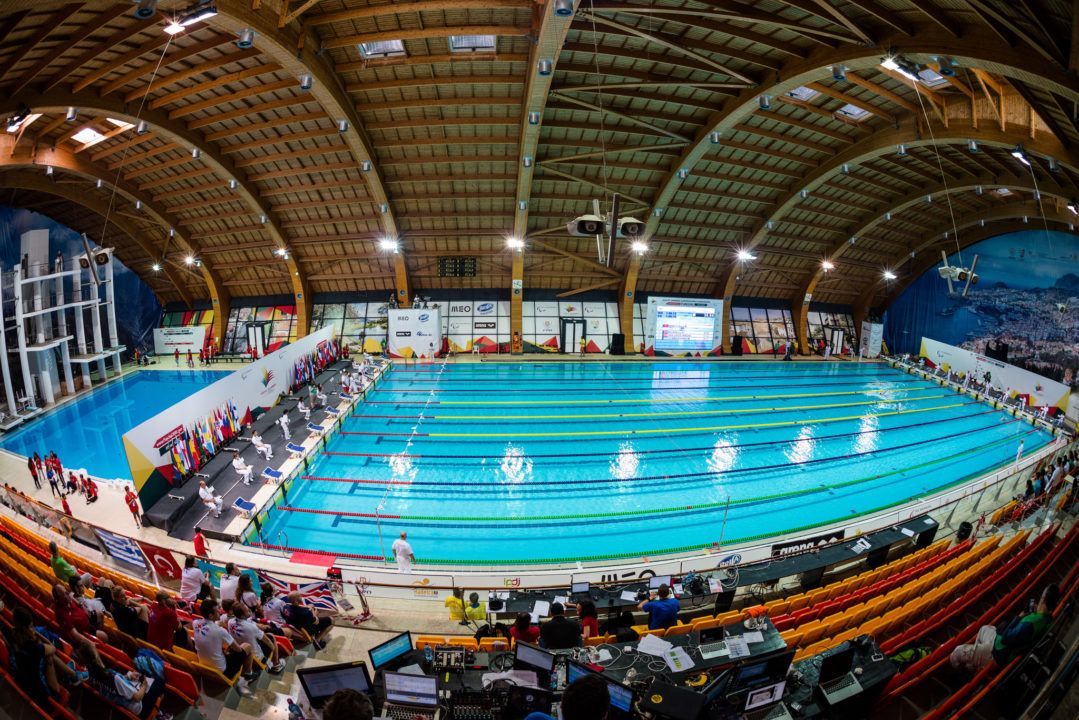 On Friday Mereshko pushed herself once again, shaving exactly four seconds off the world best, touching in at 5:14.69 to add another chapter to the gripping rivalry. Current photo via IPC Swimming/Pedro Vasconcelos

Nothing could separate the pair as they both touched in at 1:21.97 in the women’s 100m freestyle S5.

Four-time Paralympian Perales has held the Paralympic title since Athens 2004 whilst Rung has become her main competitor across all events since her own international debut in 2009. The pair have recently returned from a joint training session and have eight Paralympic titles between them.

“I am busy chasing Teresa all the time because I know this is her event,” Rung said. “I’m glad it turned out to be a draw!”

The next major headline of the day came from Ukrainian world champion Yelyzaveta Mereshko in the women’s 400m freestyle S6, who smashed the world record of Great Britain’s Eleanor Simmonds set just last week by the absent Paralympic champion.

Mereshko sensationally took Simmonds’ title at the 2015 IPC Swimming World Championships, the first time she has been beaten in the race since 2008.

“I’m delighted with my fourth gold and world record,” Mereshko said. “This afternoon I gave everything to make it happen and it did. Now I can rest!”

There was a further shared podium in the women’s 100m breaststroke SB11 as Sweden’s European, world and Paralympic champion Maja Reichard finished in exactly the same time as Dutchwoman Liesette Bruinsma to take joint gold: 1:25.47. Fifteen-year-old Bruinsma initially took the lead from Reichard after the first 50m, but the Swede came back in the closing stages.

“I did a PB [personal best] by one second so I’m so satisfied,” Reichard said. “I have had a great Championships and I’ve PB’d on everything and did a world record in the 50m free so I’m very satisfied.”

Russia’s world champion Anna Krivshina (1:07.05) added to the record-breaking action in the women’s 100m backstroke S13, her first gold of the competition.

Tearing down the last 50m, Krivshina lowered her own three-year-old best by 0.24 seconds.

There were two world records in the women’s 50m backstroke S2. Singapore’s Pin Xiu Yip (1:00.64) led the field to the wall to claim Open gold in a new S2 world best time, whilst Norway’s Ingrid Thunem (1:06.53) lowered the S1 mark for European gold and Open silver.

Italy’s Arjola Trimi (3:10.61) lowered her own world record in the women’s 200m freestyle S4 for her second gold and second new world best of the week. Mariia Lafina (3:23.06) and Olga Sviderska (3:31.98) added silver and bronze respectively to the Ukrainian medal haul.

Ukraine’s world and European champion Dmytro Vynohradets took down the regional record on his way to his sixth gold of the week in the men’s 200m freestyle S3with a time of 3:21.30.

Italy’s Federico Morlacchi (1:12.96) won his fourth gold medal of the Championships in the men’s 100m breaststroke SB8. Austria’s Andrea Onea (1:13.75) was on his shoulder throughout the race, but European champion Morlacchi had the edge. France’s Charles Rozoy (1:14.52) was third.

Russia added five gold medals to their total, maintaining their second place in the medals table with 27 gold, 26 silver and 23 bronze.

World and Paralympic champion Olesia Vladykina (1:18.98) excelled in her favourite event, the women’s 100m breaststroke SB8. The 28-year-old remains unbeaten in the race at a major event since 2008. Poland’s Paulina Wozniak (1:21.47) and Great Britain’s Claire Cashmore (1:21.53), who tied with Vladykina for gold at the last edition, was third.

Ukraine also notched another four medals on Friday evening, and have 35 gold, 31 silver and 21 bronze heading into the final day.

Serhii Palamarchuk (58.52) retained his title with an impressive performance in the men’s 50m backstroke S2. Poland’s Jacek Czech (58.92) was just marginally behind as Ievgen Panibratets (1:00.86) collected another medal for Ukraine in third.

European champion Oleksandr Mashchenko (1:15.22) was the victor in the men’s 100m breaststroke SB11. Spain’s Israel Oliver (1:15.51) tried to overturn the Ukrainian’s lead but settled for silver. Viktor Smyrnov (1:18.49) was third for Ukraine.

British swimmers collected a trio of world titles to bring their total to 16 gold, 12 silver and nine bronze and keep their third place in the table.

Hannah Russell (1:06.18) missed out on her own world record by just 0.03 seconds in the women’s 100m backstroke S12, but successfully defended her European title against Russian world champion Darya Stukalova (1:10.44) in silver. Ukraine’s Yaryna Matlo (1:13.55) was third.

“I came in there and I wanted to make sure I could really prove to everyone what I was doing,” Russell said. “I’ve been training so hard and to be able to get that back, because last year I got beat [at the World Championships], to get back to the top of the podium, it was amazing.”

Great Britain’s Andrew Mullen (1:16.11) sensationally took the men’s 100m freestyle S5 title from Spain’s Sebastian Rodriguez for his second gold of the competition. Russia’s Dmitrii Cherniaev (1:16.91) was second, followed onto the podium by Rodriguez (1:17.26) in third.

Susannah Rodgers (1:13.42) claimed anothergold for Great Britain in the women’s 100m freestyle S7. Leading on the turn, Rodgers retained her European title ahead of Germany’s Denise Grahl (1:15.01) and her compatriot Verena Schott (1:19.30).

The Netherlands’ Chantalle Zijderveld (1:17.96) improved her case for taking gold on her Paralympic debut in September, retaining her European title in the women’s 100m breaststroke SB9.

“It was the same time as the World Championships last year,” Zijderveld said. “I swam a world record a few weeks ago and I wanted to come a bit closer to that but a 1:17.00 is also very good, and I’m happy that I defended my title and got the gold again.