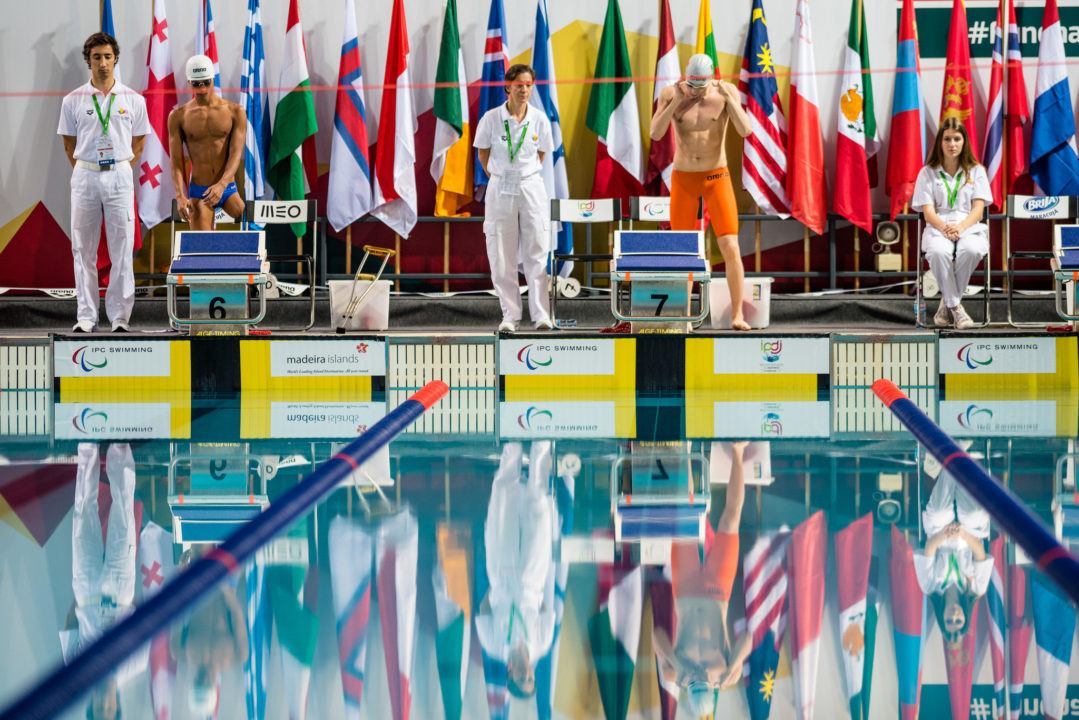 Belarusian Ihar Boki is the firm favourite to leave the 2016 IPC Swimming European Open Championships as the most decorated swimmer after winning his men’s 200m individual medley SM13 heat on the final day of competition (7 May) in Funchal, Portugal. Current photo via IPC Swimming/Pedro Vasconcales

The five-time Paralympic champion has stepped onto the top of the podium five times so far this week, as well as securing one bronze.

Also the world champion and defending European title holder in the 200m individual medley, the 21-year-old won the heats in 2:08.59 to give himself the best possible chance of winning his latest medal.

Croatia’s European silver medallist Kristjian Vincetic (4:29.24) will start one of the most hotly anticipated finals of the day as the fastest qualifier.

“It was easy,” Vincetic said. “It was a good race for the morning. I’m not expecting anything special because these guys are pretty prepared but it will be a good race.”

Home swimmer David Grachat (4:32.99) will be aiming to impress and win his second medal.

“I swam slowly to save my energy for the evening, so that I can give all that I have to the finals,” Grachat said.

Two Dutch swimmers will go for their latest medals in Saturday’s concluding session.

Liesette Bruinsma (1:09.81) has had a fantastic major international debut at the age of 15 with three gold medals, and went quickest in the women’s 100m freestyle S11 heat once again.

“I touched the lane a little bit but it was good for the morning,” Bruinsma said. “I hope to go a little bit faster!”

“For the heats it was a good swim and it was smooth,” Evers said. “The swim felt easy, much better than I expected.

“It’s the last day and all the swimmers are mentally stuffed, they are tired and are probably trying to make the heats easy,” Brasil said. “We’ll see what happens in the final. It will probably be close for the guys who fight for gold.”

Spain’s Teresa Perales (37.48) placed herself in pole position to take her fourth gold medal of the Championships in the women’s 50m freestyle S5. Brazil’s Joanna Maria Silva (38.81) and the Czech Republic’s Bela Trebinova (40.06) were second and third fastest respectively.

Three Russian swimmers head into the finals as the fastest qualifier.

Paralympic, world and European champion Denis Tarasov (27.13) is aiming to reach the top of his fifth podium as the fastest qualifier from the men’s 50m freestyle S8 heat. Great Britain’s Josef Craig (27.68) and Tarasov’s teammate Maxim Borodaev (28.64) were second and third respectively.

Rodgers said: “I took that very easy, so it was a nice comfortable morning swim. Hopefully more to come tonight!”

“The race was good, I’m happy to be in the final,” Firth said. “It’s a good morning swim I was working on my strokes, taking it nice and relaxed and feeling the water. I would like to go faster this evening.”

“It was a good solid morning swim so hopefully I can go a bit faster this afternoon,” Herbst said “It’s pretty close to my personal best so for a morning swim it’s very good.”