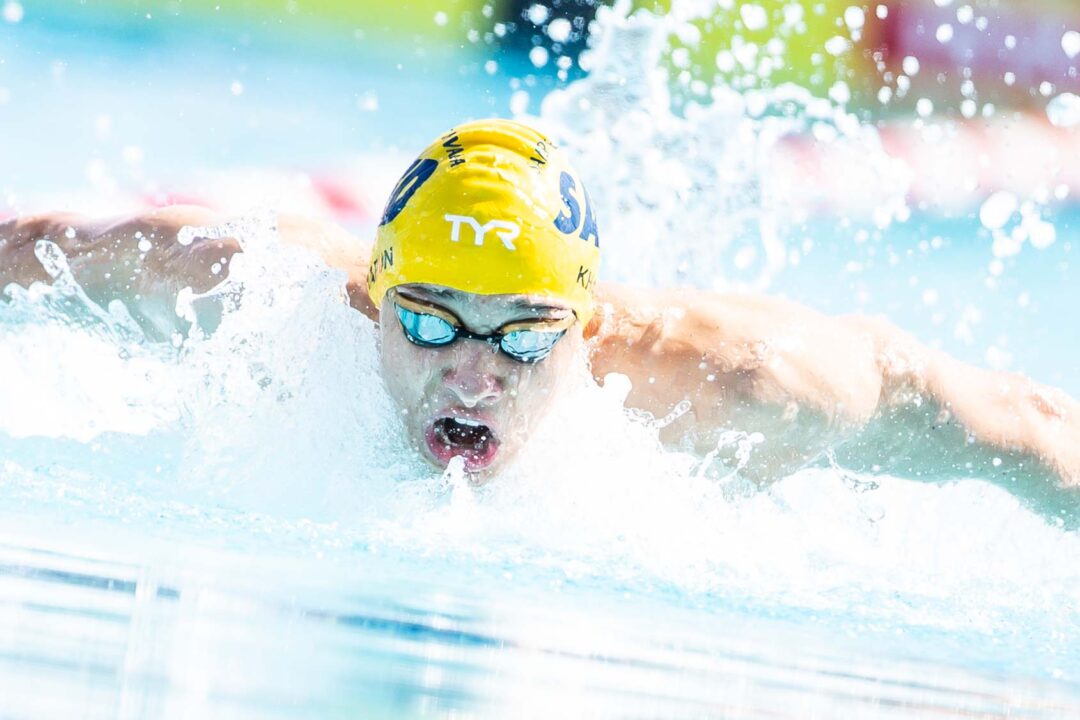 Kharun was removed from the U.S. Junior Pan Pacific Championship team after USA Swimming learned that he was not an American citizen. Archive photo via Jack Spitser/Spitser Photography

Swimming Canada announced a stacked team of 17 athletes who will represent the Canadian flag at the 2022 Short Course World Championships in December on Friday, including some of the country’s most accomplished swimmers of all-time.

Kharun, who has been an age group star in the United States for the past several years, was recently removed from the U.S. team set to compete at the Junior Pan Pacific Championships in August due to issues with his citizenship status.

At the time, USA Swimming said they were “recently informed that Ilya is not an American citizen,” and a source had indicated they believed Kharun was born in Canada. With him being named to the Canadian roster for an international meet like the World Championships, that is now confirmed.

Kharun, 17, is primarily a butterfly specialist who has also excelled in distance freestyle (and open water) under the tutelage of coach Ron Aitken with the Sandpipers of Nevada in Las Vegas.

The full Canadian roster includes 11 women and six men, with one notable omission being Josh Liendo, who recently began his freshman year at the University of Florida.

Liendo was the top Canadian performer on the men’s side at the 2021 Short Course Worlds, earning a pair of individual bronze medals in the 50 and 100 freestyle while also leading off the Canadian team to gold in the mixed 200 free relay.

Other notable members of the team on the women’s side include Taylor Ruck, who won four medals at the 2016 SC Worlds in Windsor and is currently competing in the NCAA at Stanford University.

MacNeil is also currently racing in the NCAA, having made the move from Michigan to LSU for her fifth year of eligibility, and comes in as the defending world champion in the 50 back and 100 fly.

Pickrem (200 IM) and Cieplucha (400 IM) will also be aiming to defend their 2021 titles, while Masse is coming off of winning four silvers at last year’s edition in Abu Dhabi (including all three female backstroke events). Masse also won the LC world title in the 50 back in June.

The team also features Ingrid Wilm, who established herself as one of the fastest female backstrokers in the world across the 50 and 100-meter distances last year in the SCM format during the 2021 International Swimming League (ISL) season.

In addition to Kharun, the men’s team is full of experience, led by two-time Olympian Yuri Kisil, who recently made the move to Calgary after spending time training at the High Performance Centre in Toronto.

Ruslan Gaziev, Javier Acevedo and Finlay Knox should provide the team with sufficient options to perform in the free relays, while James Dergousoff (breaststroke) and Kharun (fly) will likely be relied upon for medley duties.

Along with Liendo, McIntosh, Oleksiak and Sanchez, other members of the Canadian team at the 2022 LC Worlds who won’t be in attendance in Melbourne are Jeremy Bagshaw, Collyn Gagne, Patrick Hussey and Richie Stokes on the men’s side, and Sophie Angus, Katrina Bellio and Abby Dunford for the women.

“It is a strong group and we look forward to seeing them race in Melbourne at the FINA World Championships (25m),” said Swimming Canada High Performance Director and National Coach John Atkinson.

Ryan Mallette, who was recently named the full-time head coach of HPC – Ontario, will serve as the team’s head coach at the championships. Associate High Performance Director Iain McDonald will take on the role of team leader.

“We have an experienced staff and I look forward to supporting Team Leader Iain McDonald and Head Coach Ryan Mallette,” Atkinson said.

“Ryan will bring a wealth of experience to the team and we have great experience with our selected coaches. It is also great to see Mandy Bell from HPC-Vancouver appointed to her first Swimming Canada senior pool team, to serve alongside Greg Arkhurst, Vlastimil Cerny and Dave Johnson as team coaches.”

The 2022 FINA Short Course World Championships will run from Dec. 13-18 in Melbourne, Australia.

So who is left at the HPC Ontario? Seems majority left?

“Don’t judge a man until you have walked a mile in his shoes.”

How did he and his parents not know he was a US citizen?

Unreal that USA swimming elite upper crust and his club team coaches and board epic failed on this costing some ultra fast kids like Scotty Buff a spot to shine. Pure rubbish. Guess the office folks need a total reconstruction in Colorado Springs.

39
-6
Reply
Revenge of the Lawn Gnomes

After the stunt he tried to pull, he shouldn’t be on any team whatsoever.

4
-4
Reply
oxyswim
Reply to  Revenge of the Lawn Gnomes

He’s a 17 year old kid. He didn’t try to pull anything. His parents should be embarrassed about how they allowed things to play out, but why would you hold that against him?

meh he’s 17 yo not a 12 yo he definitely know that his parents were scheming. maybe check on his coach too.

Wait, so he’s just Canadian now? This feels like a weird dream…

it doesn’t say she’s not selected. She is not on the team. Maybe she chose not to go

An endless trip to Australia and back could disrupt the lofty training goals of a swimmer of her level, too.