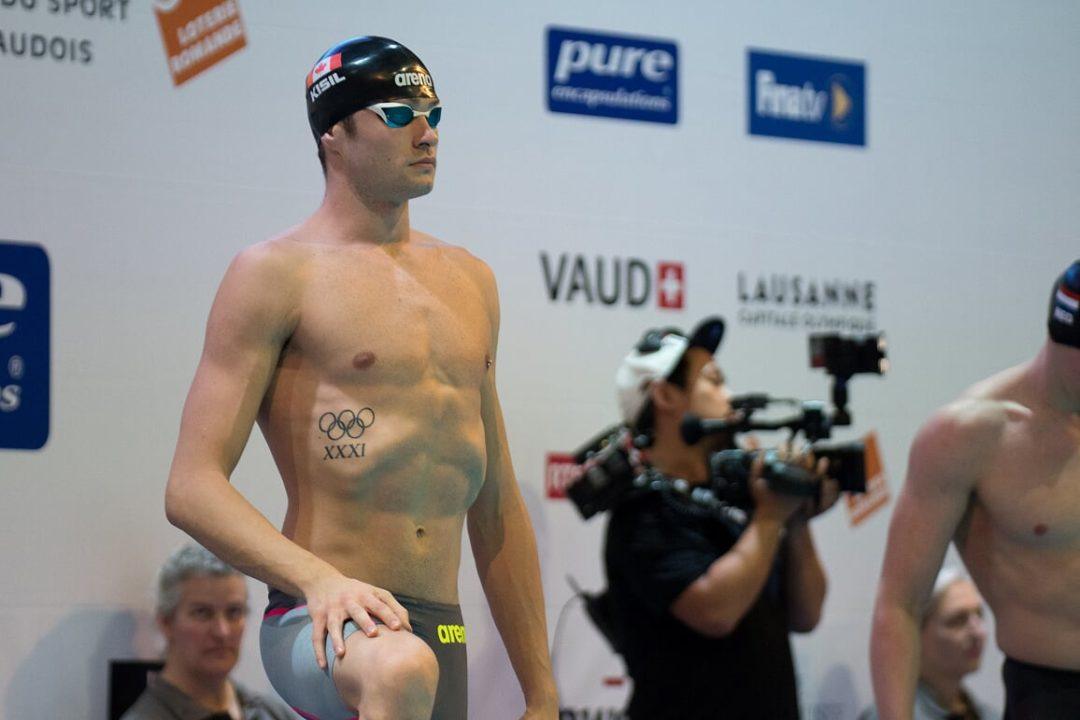 Canada's #2 sprinter Yuri Kisil is leaving Toronto to spend time back home in Calgary with family and friends and train under his former age group coach Dave Johnson. Archive photo via Kevin Reust

Canadian Olympian Yuri Kisil has left the Canadian National Training Center in Toronto, Ontario and returned home to Calgary to train and Cascade Swimming. There, he will train under his former age group coach Dave Johnson.

“Spending time at home was a bit appeal for me. It’s been 9 years since I’ve left so I am really excited to have more time to spend with friends here and family,” Kisil said of his move back to his roots.

The 27-year old Kisil trained under Johnson at Cascade Swimming until summer 2014, when at 18 years old he went to train with Dave’s brother Tom Johnson at the High Performance Center in Vancouver.

That move came shortly after he made his first senior national teams, qualifying for the Pan Pacific Championships that summer. He swam in the B-Final in both the 50 and 100 freestyles at that meet, finishing 12th in both races.

After swimming in Canadian collegiate competition for the powerhouse UBC Thunderbirds, Kisil turned pro early in 2018 and moved across the country to join Ben Titley at the National Performance Centre in Toronto, Ontario on the front edge of a shift of Canadian swimming power from west to east.

“I became a freestyler with Dave (Johnson) and he was the one who started me on the path to being a world-class sprint freestyler. So I have a lot of trust in him,” Kisil said of his connection with Johnson. “I also have a lot of fun training with Dave!

“The thing I love about the way Dave trains too is he’s been around the sport for a long time so he has a lot of knowledge about it, and even though he has been around for so long, he doesn’t get stuck doing the same thing (if it ain’t broke don’t fix it mentality). He constantly is looking for out-of-the-box, new, inventive ways to make his swimmers faster.

“On top of that he has one of the best eyes for technique I’ve seen. Dave and I have a great relationship through the years of me training under him and ever since we still would stay in contact so our relationship really feels a lot like we are working together and he’s listening to my ideas of what I think I need. And I am very comfortable being open with him on what I think will help me!”

By the end of the Pandemic, most of Canada’s Olympic pool swimming roster was based in Ontario, especially the High Performance Center under Titley.

That began to dissolve, though, when Titley left earlier this year to take over a national training center in Spain, closer to he and his wife’s homes with twins on the way. Besides Kisil, Josh Liendo is gone to the University of Florida, Maggie MacNeil is training at LSU, Sydney Pickrem is at Texas A&M, Taylor Ruck is at Stanford, Kayla Sanchez is representing the Philippines, and Kylie Masse was recently seen training with Titley in Spain (though she has not confirmed if that will be a permanent move).

Ryan Mallette was officially named the new head coach of HPC-Ontario in July, and Swimming Canada has not yet released an updated roster for the center.

There is now a growing concentration of Canadian talent in Calgary. Besides Kisil, Canadian record breaker Ingrid Wilm is also at Cascade. The University of Calgary Swim Club is home to a number of top-ranked Canadian swimmers, including Rachel Nicol, Richie Stokes, and junior record-breaker Kamryn Cannings.

At last summer’s Olympic Games in Tokyo, Kisil finished 14th in the 100 free individually and swam a finals leg of Canada’s record-setting 400 free relay (4th place) and 400 medley relay. Kisil’s 47.15 split on the 3rd leg of Canada’s finals relay was their fastest of the event. That time is also a full second better than his fastest-ever flat-start swim.

Kisil suffered an injury at the World Championships in June during warmup when he jumped and banged his elbow and forearm area. That impacted his performance: he placed 41st in the 50 free in 22.71, though he was a little better at the end of the 400 free relay, splitting 48.13. He ultimately withdrew from the Commonwealth Games because of the injury.

Not wanting to take over an article about Canadian swimming, but not sure where else to ask: can we get an update on some of the Aussie movements. Palfrey at USC looks to have lost Bri Throssell to St Peters and Tamsin Cook to Melb. Cate & Bronte Campbell will also be linking up with new coaches (and training separately for the first time ever). Where has Isaac Cooper landed?

While I haven’t seen anything about Bronte, another website confirmed a couple of weeks ago that Cate is going to Rackley to train under Damien Jones starting on October 3.

Isaac posted on IG that he’s going to St Andrews Swimming on the Sunshine Coast to train with Ash Delaney. https://www.instagram.com/p/CiZN94BLSSG/

No idea what club Tamsin went to.

Unlike her older sister, there is no indication so far that C2 will actually return to the pool. Her significant other is a Sydneysider and she seems to have settled there.

Tamsin Cook went to Melbourne Vicentre. Some other moves I noticed are Maddy Gough to Carlile and Cam McEvoy didn’t stay in Manly for long, he’s now at Somerville House Aquatics.

I think it’s time for Swimming Canada’s board of director to start holding John Atkinson accountable for his actions.

By firing Ben Titley, John has clearly put his personal interests over what’s best for swimmers/Swimming Canada. This is a huge 🚩 about a toxic culture.

Curious about how much is funding an issue for Swim Canada and does that play into issues like compensation for individuals like HPC coaches, staffing and resourcing.

Additionally, I think the board should start with an evaluation of itself and the CEO. Seems both the board and CEO are happy to let John be the front person for swim Canada. Looking at how poorly Swim Canada was able to navigate Covid seems to me the board and ceo have much to answer for.

Additionally, how does the board evaluate ROI on HPCs, carding athletes etc if it even does.

There is no lack of funding for swimming Canada. They have over 40 people on staff doing who knows what. The English system they implemented was always a house of cards protected by a once in a generation crop of talented young girls that came though the system. Trying to replicate a system where the whole country lives within a 3 hour drive of one another to a country as geographically massive and spread out as Canada is was always going to be a disaster for 99% of the swimmers.

So how many times is this that Canadian Swimming gets their Club system more vital and healthy, they start producing talent and potential. Then. The people at the top start rubbing their hands in expectation and grab all these kids off to these training centers, and surprise surprise, yet again things crater. The same old plot for yet another sequel.
These Centers based off the Brits and Aussies – who – at best field decent competitive international squads themselves every decade or so with their ‘sort of producing’ National Training Centers which only marginally work there also.
Meanwhile Canada refuses to even glance south of the border due to little brother syndrome where the Club system is kept… Read more »

Ingrid Wilm is with Cascade and Dave Johnson, not UofC. (unless something changed in the last couple months)

It’s safe to say that a lot of these swimmers were not pleased with Ben leaving. Perhaps they should have brought in a more world class coach to replace him.

When these NTCs are good they are good, but may god when they are bad, they crash and burn.

This seems to be another implosion of the NTCs like we saw a couple years ago when some were just open one day and then closed.

They just had open applications for swimmers to come train at the Ontario centre which has basically lost all of its stars. I just hope there are solid training bases formed soon for those athletes with the lead up to Paris.

What is John Atkinson saying about the exodus of everyone from the National Training Center in Toronto? Did he ever give an honest answer of why Ben wasn’t resigned?

This article doesn’t even mention Summer and a few other girls now training in Sarasota.

Do you know if Summer is planning to stay in Sarasota – and which other girls are training there?

In a recent interview, Summer said her family rented a house there, so that is likely a long term move. I don’t know how long the other girls will stay, but they’ve been there for a while and I don’t think anyone is leaving anytime soon.

She said in the interview with Brett Hawke that she plans to train half the time in Sarasota and half the time with the HPC. Of course that could change in the future, but buying house indicates a long-term move, renting a house does not.

Who are the other girls?