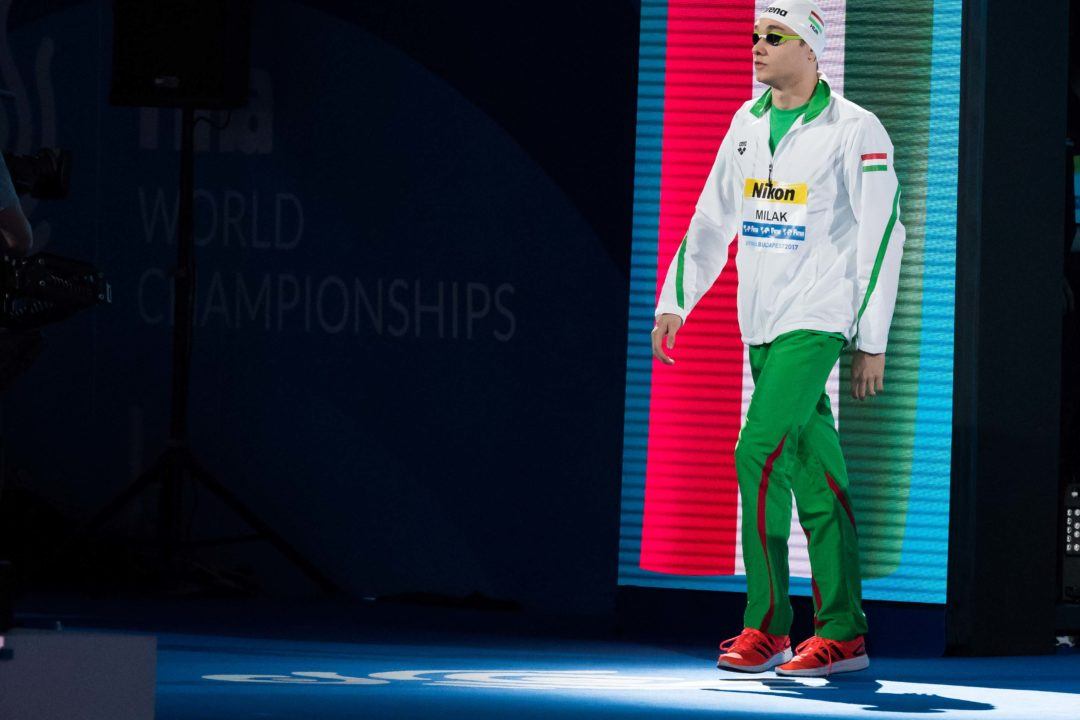 Day two rolled on at the 2021 Hungarian Spring Nationals, with the quartet of Gabor Zombori, Nandor Nemeth, Balazs Hollo and Kristof Milak combining to set a new Hungarian national record in the 4×200 free relay at 7:07.67.

The big splits today were Nemeth’s 1:46.67 second leg and, of course, the huge anchor from Milak at 1:44.86. Milak has been swimming extremely well this week, including going a best time of 22.19 in the 50 free to win the event this morning, and his freestyle has looked especially good (at least, in comparison to his own bests– he went 1:51.40 in the 200 fly, which is faster than any other swimmer has ever gone).

This is also a young relay– nobody on the relay was born before 1999, while lead-off leg Zombori was born in 2002. They beat the old record, which had Laszlo Cseh and was done in 2009, while they also went way faster than the Hungarian relay went at 2019 Worlds (7:13.64). Milak was also not on the relay at Worlds.

In Olympics context, this was a key swim for Hungary. They had previously sat with the third of four wildcard spots from their 2019 Worlds time, which had them at the #15 slot out of 16 total slots that get invited. The top 12 teams at Worlds, plus four wildcards, get selected to race in Tokyo.

Hungary now sits at the #1 wildcard spot by more than five seconds, which should easily qualify them for Tokyo. Their time today is also ninth on the below list. While their swim today puts them atop the wildcard rankings, it doesn’t displace any teams as they were already a wildcard team, so no countries are actually pushed out.

What’s the probability Milak delights us with a 3:44 or better 400m free tomorrow?

He was disappointed. I think he focuses on 100 Fly.

Very close … only 4 seconds off …
Crazy how some people on here always expect a swimmer who just had a great swim to smash his PB’s in all events. Same happened with Greenbank last week after his 200 back PB.

Would be great if you could post some of the top times. What times did Kos (200 IM) and Zombori (400 free) achieve?

As it was a time trial he would have had clear water the whole way. But he had more racing to do later in the session so maybe he didn’t give it everything. Either way a 1.44.86 split is highly impressive. Milan will be one of the many contenders for 200FS gold in Tokyo.

How the hell is one great split to say that he will be a gold medal contender? It is disrespectful to put him on the same level as Rapsys, Yang and maye Scott who all have actually gone sub 1:45 flat start, especially when he will have the 200 fly the same day.

He has speed as he showed in the 50FS and he has endurance. Sun Yang probably won’t be there while Rapsys, Scott and the other contenders as good as they are have not done times that puts them in a different league. As for the scheduling, the 200FS final is more than an hour before the 200BF semi. Milak will be able to qualify with his eyes closed.

All of the guys you mentioned have done times that put them in a different league than Milak’s best time of 1:46.6. Should we also put Scott in the same league as Dressel and Chalmers because his relay split was faster than their best times? The answer has to be no and the same is true for Milak. At least wait until he shows that he can go sub 1:45 flat start before you hype him up like crazy.

Actually Hungary will have a very decent relay comes Tokyo.
1. Zombori has a 1:47.71 PB (flat start) from 2019. Given that he is very young (born is 2002) I wouldn’t put past him a 1:46 high new PB in Tokyo.
2. Nemeth has a similar flat started PB time and he is obviously not in top form, so I would expect a 1:45 high rolling split from him.
3. Hollo is also good and young but the team will probably substitute in Kozma instead of him. Kozma has a 1:44.81 rolling PB in 200 free from the Budapest Worlds.
4. Milak is a phenomenon. He only starts the serious preparation for Tokyo now. So an… Read more »

Please stop dreaming. Reaching the final would be a great result for Hungary, they will absolutely not even come close to a medal. 7:04 seems like a somewhat realistic goal. Nemeth hasn’t gone sub 1:47 in more than 3 years and Zombori never went faster than 1:47.71. It never happens that all your talents keep improving.
Again: Please stop being delusional, otherwise you will only get disappointed.

Missing France with 7:14.23 in Marseille

Why does it feel like the swimswam staff is writing a milak fan fiction with this meet?

Perhaps because of his achievement?

Really surprised by this swim. I didn’t think that he could be a medal contender in this event at the olympics. Kos has a good chance to make the 200 IM final (maybe also the 400 IM medal). “Interesting” that Hungary got another potential olympic medalist out of nowhere. After Hosszu retires, i don’t see them winning any medals on the women’s side in the near future, but Milak and Kos alone could combine for 3 or 4 medals at each big competition in the next couple of years. Zombori, Kenderesi and Nemeth could combine for another 1 or 2 medals. The future of hungarian swimming seems secured.

1) Not sure why you brought up Kozma, he is irrelevant when it comes to potential medalists.
2) Kapas won because the field was insanely weak. I see absolutely no chance that she wins a medal unless she improves by at least a second + it isn’t like she is some young talent, so she won’t be enough for long after the retirement of Hosszu and very likely won’t go much faster for the rest of her career. When you have to name a (soon to be) 28 year old as your best shot for medals in the future, it already shows how dire the situation is.

Milak is my dark horse in the 200m freestyle. Has been since 2019 worlds. There’s something about great 200m fly swimmers that gives them an edge in the 200 free.

I really like what you wrote about our swimming future. If only that “interesting” part wasn’t in it. What are you implying? Isn’t Hungary a swimming powerhouse (kind of) since the beginning of modern Olympics? Isn’t Hungary won the first ever swimming gold (100 Free – Alfred Hajós). I thought we have a reputation with one of the greatest swimmers and coaches in the World. And we are on the 4th(!) place on the medal table of Olympics after US, Aus and East Germany (maybe you mixed them up with us). Egerszegi, Darnyi, Gyurta, Kovacs, Rozsa Güttler, Hosszu, Milak, etc. Guess I was wrong…

They’re implying what it seems they’re implying and it’s not the first time they’ve done it about Milak over the last couple of days and I’m surprised the comments haven’t been removed but I guess it’s vague enough to have been missed. Here’s another one:

Interestingly sun yang has been 1:43.16 in a relay

Yes, but both of those were at very high stakes international meets. This was done in an empty pool. I could easily see milak go 1:43 in the Olympic focal of the relay. Not that the team is good enough to medal anyways.

Fastest flying split in history funnily enough, despite being over a second behind the flat start WR.

Peak Phelps and supersuited Biedermann always led off the relays. Agnel in 2012 was eating on the GOAT’s afterwake when he split 1:43.24.

Yet Horton blew both Haas & Guy in the final lap of the 4 x200 in Gwangju, with Yang also in the race but China were a fair way behind.

Just 1 event. I don’t think he will be able to challenge Dressel in the 100 tbh, he will just push Dressel to go faster. I also think Maxime Rooney or tom shields whoever is second, will get a medal.

I’m not saying it will happen, but I can totally see milak upset dressel and grab a 200m free medal. It’s just up there in my cloud of possibilities.

If that will happens it’s hard to differentiate who is a greater swimmer. Both will have 2 individual golds and a third minor. Dressel will have more relay medals. Maybe dressel will also throw down a great 200m free, but from the way milak is looking wouldn’t put it beyond him to put up an insane 100 free in a relay. It will just be hard to call.

The only chance that he beats Dressel in the 100 fly is if Dressel isn’t at his best. In that case Dressel might also not win the 100 free and the 50 free. Seto could also win 2 individual golds and a silver. Personally i would bet on Seto ending up with a better medal tally than Milak.

Dressel will not win the 200 free! And I doubt he can beat Chalmers, the current Olympic champion and most talented of all.

Not much credit has been given to King Kyle, who is younger then Dressel & already the 100 free Olympic champion.

Chalmers is awesome, but Dressel can beat him in the 100 free if that is what you’re talking about. Dressel beat him at the last world championships in 2019, going 46.96 to Chalmers’ 47.08.

But if you are talking about the 200, then yeah, I think Chalmers beats Dressel in that one, assuming both swim it.

It will be a great race, but the difference there is nothing. Chalmers can just as easily beat Dressel, he’s going for back to back 100 golds like the Duke, Tazan, PVH & Popov.

Since when Dressel swims the 200 free?

Don’t you think Chalmers will beat Dressel in 100 free? I do think so.

He’s from the wrong country to be the star of any Olympics.

And what is that supposed to mean? I’d like to think that Katinka Hosszu – also from Hungary – was one of the handful of stars in Rio 2016. Or am I biased?

Nah, I’m just saying that what country an athlete is from can greatly impact how much fame and profit they can make from their success in the pool. I was definitely not trying to say anything negative about Hungary.

I actually think he has more potential in 200/400 free than 100 fly if he trains seriously for them. He’s more of a middle distance swimmer than a sprinter.