How Swimming Nearly Killed Me And Changed My Life 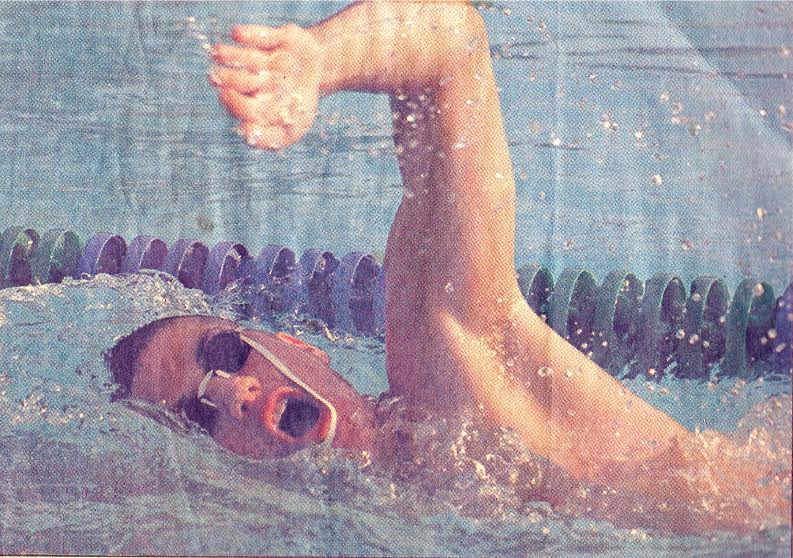 Courtesy of "swammer" Jeremy Kane, who is currently running for Mayor of Nashville, Tennessee. You can find out more about him and his campaign at KaneForMayor.com Current photo via Jeremy Kane

Courtesy of “swammer” Jeremy Kane, who is currently running for Mayor of Nashville, Tennessee. You can find out more about him and his campaign at KaneForMayor.com

I was 6 years old when I first joined a swim team. My parents were both collegiate athletes – my father played football and my mom was a competitive tennis player. Growing up, playing sports was an important value they instilled in me and my brother and sisters. They believed that sports trained not only your body, but also your heart and mind. As kids, we spent quality time together as a family playing basketball or tennis in the park. Being active was a big part of our family identity so when my older sister decided to join the local swim team, I followed in her footsteps and joined too.

From day one, I fell in love with swimming, which became a defining part of who I am. I started off as an age group swimmer at Nashville Aquatic Club–one of the most competitive club teams in the country. I qualified for National meets and had a promising career at a young age. While in high school, I woke up at 5am every morning for practice and then went to school. When school dismissed, I returned to practice in the afternoon. This was my daily routine. The strict schedule left little free time for me to get into trouble.

Swimming can be a brutal sport that has little mercy for those who lack the passion. It’s hard to describe the emotional and physical drain that can be felt when the alarm goes off at 4:45am on a Monday morning in the middle of February. The last thing you want to do is jump into a ice cold pool. Your body is telling you to hit snooze and go back to bed–there will always be tomorrow. It takes all the will power you can muster up at 4:45am to remind yourself of your goals and that you can’t let an opportunity to improve slip by. For me, all I had to do was picture myself at the Olympic Trials and that motivation would overpower my desire to go back to bed.

I was passionate about swimming–I loved every bit of it. Despite the early mornings, the cold pool, the intense distance workouts, I still loved it because I had a goal. Each day was an opportunity to either get a step closer or a step further away from my goal–and it was in my control to make sure I was inching closer.

I had just turned 17 years old when I competed in the 1996 Olympic Trials. Since I was a distance swimmer, my best shot at making the Atlanta Olympic Team was in the mile. Only the top two swimmers out of the fifty that had qualified for trials would make the Olympic Team.

I returned home elated that I had done so well at such a young age and I was even more determined to continue the long hours of following that black line down the pool. I was optimistic that I had come so close to earning a spot on the Olympic team and encouraged to keep my sights set on my next opportunity at the Olympic Games in another four years. I didn’t know at the time that that opportunity was going to be my one and only shot at the Olympics.

Shortly after the Atlanta Olympics I earned a swimming scholarship to Stanford and headed out West to continue my academic and athletic career.

During my freshmen year at Stanford, we set our eyes on winning the NCAA title. Our team was a cohesive group. Each of us wanted the National Title more than anything and we were ready to put everything we had into making sure we ended the season with the title in our hands. Most importantly, we functioned as a team. This is often hard to accomplish in swimming since ultimately the sport is driven by individual achievements. It takes a certain type of selflessness and humility to fully embrace swimming as a team sport. Our team was able to do this. Each practice we completed and each race we swam wasn’t for ourselves–it was for each other. We won the National Championship that year because we came together and worked as one to achieve something greater.

Unbeknownst to me at the time, that was my last full collegiate season.

As my sophomore year started, something felt off. I was getting tired more frequently and began experiencing dizziness. I pushed through as much as I could thinking that it was just a side effect of hard training. I had to keep going–the Olympics were only two years away. Tragically, the symptoms increased. I started to pass out and at one point, fainted while on the starting block right before a race.

I consulted countless doctors and sports medicine experts, all of whom failed to diagnose what was wrong. Nearly a year had passed when a doctor discovered that my symptoms were because of a disconnect between my heart and my brain. My brain was misinterpreting signals from my heart, making my heart pump abnormally fast, resulting in a resting heart rate of 160.

Bedridden for six months, my heart rate finally returned to normal. The doctor told me that I could continue to swim, but could never compete or train at full capacity or I would risk getting sick again. In other words, my swimming career and goals were forever shattered.

I didn’t know how I could go back to something I was so passionate about and not give it my all.

Knowing my motivation and dedication to my goals and to my teammates, I would not be able to hold myself back in the pool. By overexerting myself, I would then become sick again. I made one of the hardest decisions of my life and ended my competitive swimming career at the age of 19.
Jeremy Kane before giving up swimming
Jeremy Kane before giving up swimming

Being an active person is all I have ever known and I was in search of a new passion that I could fully invest my emotional, mental, and physical well being. I also needed to fulfill the goal-oriented part of me that swimming had always fulfilled.

Ultimately, I found that passion in work. I finished college, got an MFA in Ireland, got married, and moved home to Nashville. I started a group of public charter schools. I became relentless in my passion for helping students and their families change the trajectory of their lives and build a more secure and stable future for themselves and their families. I became a father along the way. And now, I want to lead Nashville to an even better and brighter future.

Though I’m no longer a competitive swimmer, I still focus on how I play a role in whatever team I’m on. I’m still competitive. I still strive to be better than yesterday. My future and my dreams took an abrupt turn. I gathered myself, got focused, and made an incredible life. I learned to never be afraid to find a new path, start over, and make the next step better than the one before.

Thanks to Vanderbilt University swimmer Lauren Egan for bringing this “swim story” to our attention.

Noticed this on Jeremy’s campaign site bio:
“Jeremy continues to compete in triathlons and has completed over twenty half and full marathons.”

So I’m curious how Jeremy trains now. Is it difficult to hold back? Have you had any problems training after college?

Wow! Great read. Best to you in your career. Well-written and inspiring.

Good luck in your Race for Mayor Jeremy! Wish I lived in NV…you got my vote!

If you really want the support of swimmers and swammers, shouldn’t you tell us your position on public funding of swimming pools?

…funding for pools has always been in the back of my mind. It’s my want/dream that a nonprofit could be founded and funded at a high level, 500+ million… I understand raising money. I understand how hard it is, but I also know limits are only what we put on ourselves.

Please consider that this is coming from a person who identifies with swimming and dreams up ideas for swimming all the time. In sum, I don’t have expertise in this area…and dreaming requires no time, energy or commitment, all things needed to truly mold an idea into being.

ANYWAY, I feel if there was a war chest of money out there, a nonprofit with a mission (only one… Read more »