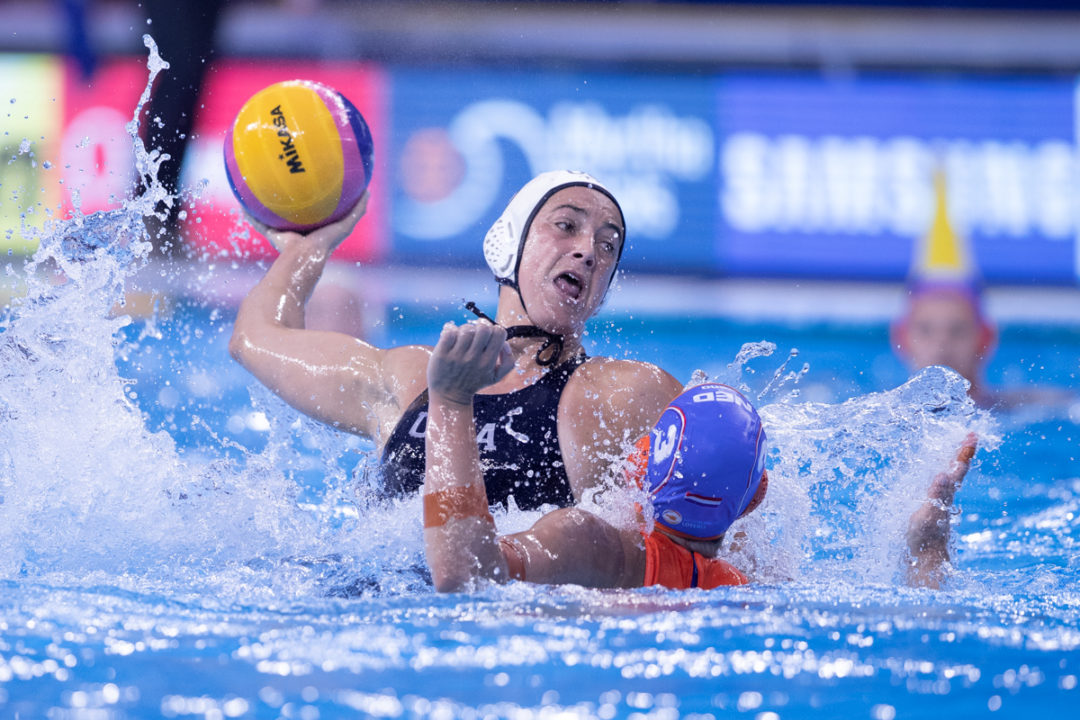 The American women beat one of their biggest rivals, the Dutch women 12-9 in group play on Tuesday at the World Championships. Current photo via “Rafael/Domeyko Photography”

Host South Korea scored its first goal of the tournament, but allowed Russia 30 in the first match of the day. Hungary also sits atop Group B at 2-0. Meanwhile, the USA is 2-0 in Group A, Spain has two wins in Group C and Italy is undefeated in Group D.

The United States bested its toughest Group A foe, edging past the Netherlands 12-9, while New Zealand poured it on early in a 17-4 pounding of South Africa.

The Americans and the Dutch are long-time rivals, having faced off for the gold medal at both the 2015 World Championships (won by the US) and the 2008 Olympic Games (won by the Netherlands). While the Dutch have had some down years – they were only 9th at Worlds in 2017 and haven’t qualified for the last 2 Olympic Games, they are resurging behind a young roster.

The Americans trailed 4-3 midway through the second quarter, but boasted an 8-5 scoring edge in the second half to close out the 12-9 victory. The Dutch knotted the score at 7 on a Van Der Sloot penalty with 1:54 to go in the third, but the USA countered with three goals in a row by Maggie Steffens, Melissa Seidemann and Kiley Neushul to push ahead 10-7 with 4:47 to play.

The Netherlands cut the margin to one at 10-9, but Maddie Musselman scored with 1:27 left and Rachel Fattal added an extra-player goal with 17 seconds to play to seal the victory for the United States.

Seven players scored for the Americans, with Musselman and Kaleigh Gilchrist notching hat tricks and Steffens putting in two goals. The USA hit 35 percent of its shots (12 of 34), including 4 of 8 extra-player chances. Amanda Longan held things down between the pipes, saving 47 percent of the shots she faced (8 of 17). In a fairly even match, the Americans boasted 28 seconds more possession (16:14 to 15:46).

Eight Dutch players scored, including a 2-for-2 effort by Maartje Keuning. The team made 29 percent of its shots (9 of 31), including one of six extra-player tries and the game’s lone penalty. Joanne Koenders registered 11 saves (of 23 shots faced) in goal for the Netherlands.

New Zealand outscored South Africa 8-0 in the first half and 14-2 in the first three quarters to garner its first victory of the tournament, 17-4.

Bernadette Doyle and Morgan McDowall led the way for New Zealand with four goals apiece, while Emmerson Houghton added a hat trick. As a team, the Kiwis made 53 percent of their shots (17 of 32), including 6 of 8 extra-player chances and one penalty. Goalkeeper Jessica Milicich did her job, stopping 11 of the 15 shots she faced (73 percent).

South Africa held the ball nearly four more minutes than New Zealand (18:02 to 13:58) but converted just four of its 21 shots in the game. The team did hit its lone penalty try. Amica Hallendorff scored twice to lead the South Africa, while Yanah Gerber and Christine Abrahamse each added once goal.

Russia and Hungary are set to meet on Thursday for a spot in the quarterfinals out of Group B after both won on Tuesday in very different matchups.

Russia kicked off the day with a crushing 30-1 victory over Korea, which saw 10 players notch hat tricks.

Elvina Karimova, Tatiana Tolkunova and Daria Ryzhkova each went 3-for-3 on the day, while Alena Serzhantova was 3-for-4 as the lone player to play all 32 minutes. Goalkeeper Evgeniia Golovina even took one shot, while stopping 18 of 19 she faced in the game. Russia made good on all three of its penalty attempts and 30 of 41 total shots.

Daeul Kyung got Korea on the board for the first time in the tournament with a fourth-quarter score as her team trailed 27-0. The team scored just once in 30 shot attempts, breaking onto the scoreboard with 4:16 left to play.

Russia went up 7-0 in the first eight minutes before adding nine, eight and six goals respectively in the other three periods.

Hungary built a 13-9 lead through three quarters of play, before watching Canada creep back within one in the final eight minutes of a 15-14 win. The Canadians outscored Hungary 5-2 down the stretch before coming up just short. Emma Wright supplied an action shot with 6:30 to go in the fourth quarter, then Joelle Bekhazi chipped in an extra-player goal (5:42) and an action shot from Monika Eggens (4:20) had Canada within one at 14-13. Rita Keszthelyi scored the game winner with 2:36 to play (15-13). Kelly McKee put in one final goal for Canada with 27 ticks left on the clock.

Keszthelyi netted seven goals for Hungary (on 15 shots), while seven other players scored, including Aniko Gyongyossy (2). The Hungarians hit 15 of 34 shots (44 percent) including 3 of 3 penalties, all taken by Keszthelyi. The victors made good on 6 of 10 extra-player chances.

Wright and Shae Fournier notched hat tricks to lead eight Canadian scorers. Canada made 44 percent of its shots (14 of 32), including 8 of 13 extra-player tries.

Spain remained atop Group C with a 18-6 victory over Kazakhstan, while a 20-4 Greek win over Cuba sets up a battle for second place in the group between the Kazakhs and Greece on Thursday.

Nine players scored for the Spaniards, with Beatriz Ortiz Munoz and Irene Gonzalez Lopez leading the way with hat tricks. As a team, Spain hit 18 of 39 shots (46 percent) and went 2-for-2 on penalties. Spain put in goals on three of four extra-player tries.

Anastassiya Yeremina and Anastassiya Mishina led Kazakhstan with two goals apiece. The Kazakhs made 6 of 29 shot attempts, including both of their penalty tries. Kazakhstan failed to capitalize on any of its eight extra-player opportunities.

Spain led 3-1 after the first quarter and broke the game open with a 7-3 rally in the second stanza, including two goals by Ortiz Munoz (a center shot and a counter attack to make it 5-2). The Spaniards then outscored Kazakhstan 8-2 in the second half to claim the 12-goal win. Spain closed out the game on a 4-0 run over the final 4:11.

Greece jumped out to a 5-0 lead and cruised to an 11-0 advantage over the first 13 minutes of the game, including six actions shots, two center shots and a penalty. Cuba cut the margin to eight (11-3) at the half with a trio of extra-player goals. The Greeks recorded another 5-0 run in the third quarter en route to a 20-4 win over Cuba.

The Greeks made 51 percent of their shots (20 of 39), including two penalties, while Cuba scored on just four of 34 shot attempts. Cuba held the ball for 17:26 to Greece’s 14:34 in the game. Greece made good on 5 of 8 extra-player tries, while Cuba managed three goals in eight attempts.

Tuesday’s Group D action featured a pair of close affairs with Australia earning its first win with a 14-12 decision over China and Italy moving to 2-0 by squeaking past Japan.

Australia gained the edge over China in the second quarter, outscoring its foes 5-3, snapping a 4-all tie after the first eight minutes with help from counter attack goals by Keesja Gofers and Lena Mihailovic. China knotted the score at 10 after extra-player shots by Xiao Chen and Huan Wang, but were outscored 4-2 down the stretch.

Gofers and Rowie Webster logged hat tricks to lead the Aussies, while Hannah Buckling and Amy Ridge registered two goals each. Australia hit 48 percent of its shots (14 of 29) including two of three penalty chances. The victors utilized two goalkeepers: Gabriella Palm (5 saves of 11 shots faced) and Lea Yanitsas (3 of 9).

China got four goals from Zihan Zhao and three from Huan Wang, while converting on 12 of 30 shots as a team. China made good on five of nine extra-player tries.

Italy built a 6-4 lead at the half and held on down the stretch as both teams scored once in the third quarter and twice in the final stanza of the 9-7 victory. A penalty with 6:53 to go in the third and an extra-player goal just 45 seconds into the fourth by Roberta Bianconi gave Italy the edge it needed to claim the win.

Neither team was efficient offensively, with Italy making just 26 percent of its shots (9 of 35) and Japan converting 22 percent (7 of 32). Giulia Gorlero starred in goal for Italy stopping 70 percent of the shots she faced (16 of 23), while Rikako Miura boasted a 64 percent save percentage (16 of 25).