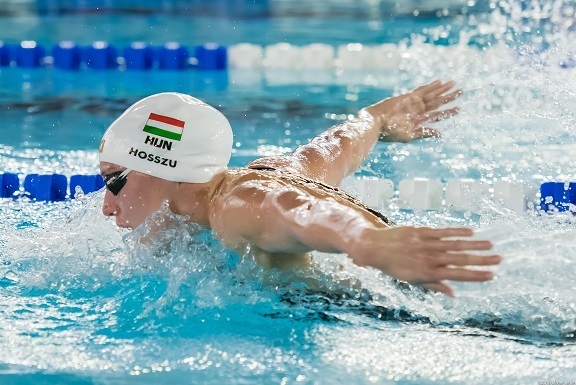 Katinka Hosszu made history in many ways in 2019, and this week added one more superlative to her resume: the most Hungarian Sportswoman of the Year awards. Archive photo via Lausanne Swim Cup

Coincidentally, Martinenghi won Gold at the World Championships earlier this summer in the exact same time – 58.26.

The Association of Hungarian Sports Journalists (MSSZSZ) has named Kristof Milak and Katinka Hosszu as their 2019 Hungarian Athletes of the Year. The 2019 awards are the 62nd edition and saw 399 votes cast for the best in multiple categories.

For Hosszu, this is a 7th award, which ties another great Hungarian swimmer Krisztina Egerszegi for the most such awards. Even after a 2018 that saw turmoil for Hosszu both personally and professionally, 2019 was another banner season for the 30-year old. She swept long course World Championships in the 200 IM and 400 IM for the 4th-straight meet, which included becoming the first woman to claim 4-straight world titles in an event (the 200 IM) and the first woman to claim 5 overall world titles in an event (the 400 IM. She also won her 300th overall gold medal at the FINA Swimming World Cup, easily the most in history, and was named the MVP at 1 of the 3 International Swimming League meets in which she participated.

Hosszu accepted her award via a recorded message as she is in China this week competing at the FINA Champions Series, where through 1 meet she is the leading money-earner.

As for the 19-year old Milak, his award for Male Athlete of the Year was presented by American Mark Spitz, whose father’s family is from Hungary. As compared to Hosszu, who has been dominant in Hungary for a decade, Milak had a breakout season in 2019. He won his first World Championship gold medal, topping the 200 fly in a new World Record time of 1:50.73. That  broke the old World Record held by Michael Phelps – the most decorated swimmer in history.

It was a big night for aquatics: Zsolt Varga, the coach of the Ferencvaros men’s water polo team, was named Coach of the Year after leading his team to a clean sweep of all possible trophies, including the European Champions League title. His Ferencvaros squad was named Team of the Year.

Hosszú just equalized, Egerszegi has 7 titles as well. (Another not swimming related correction: Zsóri won an award for the best Hungarian goal of 2019 this evening, he won the international Puskás Award earlier.)

had thoughts about that ….She is among the Legends of Hungary swimming History now

It will all be decided at the 2020 Olympic Games in Tokyo. If Katinka wins two more gold then she will be the best ever Hungarian swimmer. I am hoping that she will.

Oh to live in a country where swimmers are respected as the supreme athletes they are in this way. Congratulations to both.

i swear, yoziks housszu-hate made me subconciously root more for her than before

I hope that when you are in the state of being conscious you are still able to control your dark Sub. But anyway thank you. Never thought about myself being able to be so influential in English speaking/reading community. 😀 😀

It works in politics too. CNN made me a Trump voter -:)