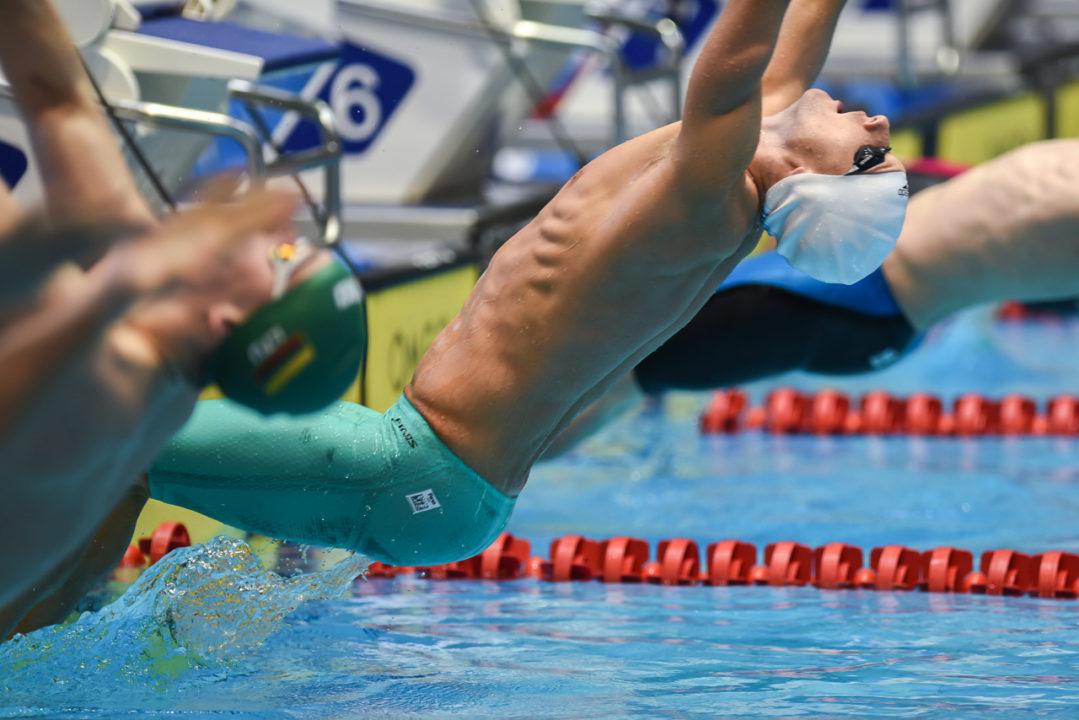 Great Britain's 200m back bronze medalist from Gwangju, Luke Greenbank, will look to rain on the backstroke parade in Glasgow this week. Archive photo via Peter Sukenik/www.petersukenik.com

The men’s backstroke events are set to bring former World Champions, reigning World Record holders and overall mega weapons from around the continent to Glasgow to contest the 50m, 100m, and 200m races at the 2019 European Short Course Championships.

At the 2014 Short Course World Championships in Doha, Qatar, Frenchman Florent Manaudou established a new 50m back World Record, topping the podium in a time of 22.22. That mark remains as the WR with the 6′ 6”, 210-pound sprinter entering Glasgow in this sprint event, along with the 50m free and 50 fly holding spots on his agenda.

For this meet in Glasgow, however, Manaudou comes into the competition as the 8th ranked swimmer in the 50m back with a time of 23.31 after having taken time off post-Rio where he took 50m free silver.

Topping the 50m back field for Glasgow is Shane Ryan of Ireland, the former American national teamer who busted out a time of 22.76 to earn his country’s first-ever World Championships medal in Hangzhou last year at the Short Course Championships.

Ryan holds just a .01 advantage over Russia’s powerhouse star Kliment Kolesnikov on the entry list, with the pair owning the only sub-23 second seed times of the field. Kolesnikov has proven he is beyond dangerous, taking the 50m back silver, 100m back gold and 200m back gold in Copenhagen 2 years ago.

Most recently at this summer’s long course World Championships, the teen fired off a time of 24.51 to reap bronze in the 50m back event, while Ryan rather surprisingly withdrew from the semi-final to focus on Ireland’s medley relay Olympic qualifying shot.

Italy’s Simone Sabbioni snagged the 50m back gold ahead of the Russian Kolesnikov 2 years ago in Copenhagen and also earned silver in the 100m, so the Italian record holder will look to keep his podium streak alive. Sabbioni did pull out of Italian Nationals earlier this year due to injury, of note.

The way Manaudou has been performing across the International Swimming League (ISL) circuit, however, the powerhouse athlete looks like a man on a mission.

As mentioned, 19-year-old Kolesnikov is the reigning 100m back European Short Course Champion, having produced a monster 48.99 outing in Copenhagen for gold. That edged out Sabbioni by well over half a second. The Russian followed that up with a bronze medal in this event at the 2018 Short Course World Championships.

Seeded 2nd entering Glasgow is his countryman Andrei Shabasov, who adds his name to the shortlist of sub-50-second seeded swimmers with a time of 49.97, along with Romania’s Robert Glinta‘s 49.98.

Germany’s Christian Diener placed just off the podium in this event in Copenhagen, settling for 4th in 50.13. He’ll be looking to upgrade that performance this time around, as long as he can keep ahead of Sabbioni, Poland’s Radoslaw Kawecki and Russia’s Grigory Tarasevich.

Tarasevich is especially on a hot streak, having taken 100m back gold and 200m back silver at this summer’s World University Games.

Lurking in the shadows is Italian young gun Thomas Ceccon, who has shown rapid improvement across multiple events throughout his Youth Olympic Games and European Junior Championshpis medal-reaping performances.

Great Britain’s Luke Greenbank is also a man to watch in this 4-lap affair. Although somewhat untested in elite international short course meters waters, the Loughborough star broke through with a 200m back bronze medal at this summer’s LCM World Championships, while also producing a lifetime best in the 100m sprint.

Poland’s Radoslaw Kawecki looks to be the 200 back frontrunner on paper, holding the top-seeded time of 1:48.25. That holds over a 2-second advantage over the next closest competitor of Diener, who enters Glasgow with a mark of 1:50.31.

It’s almost easy to pass up Kolesnikov, who ranks way back in the 12th slot entering this meet, holding an entry time of 1:52.64. However, the Russian took gold in this event in Copenhagen in a huge 1:48.02, so the man is simply lurking in the back field until he needs to make his move.

But, Kawecki won’t give up the top spot easily, having settled for silver 2 years ago in 1:48.46. With the 2017 bronze medalist in this event, Danas Rapsys of Lithuania, opting for the IM and fly events to supplement his freestyle this time around, Israel’s Yakov Toumarkin and the aforementioned Greenbank will look to fill the void to round out the top 3 finishers.

Greenbank holds a personal best of 1:51.16, which situates him as the 6th-seeded swimmer, but that time is from December 2018. The man has grown by leaps and bounds as a swimmer since then, and his trajectory suggests a big swim here in Glasgow in front of a semi-local crowd.