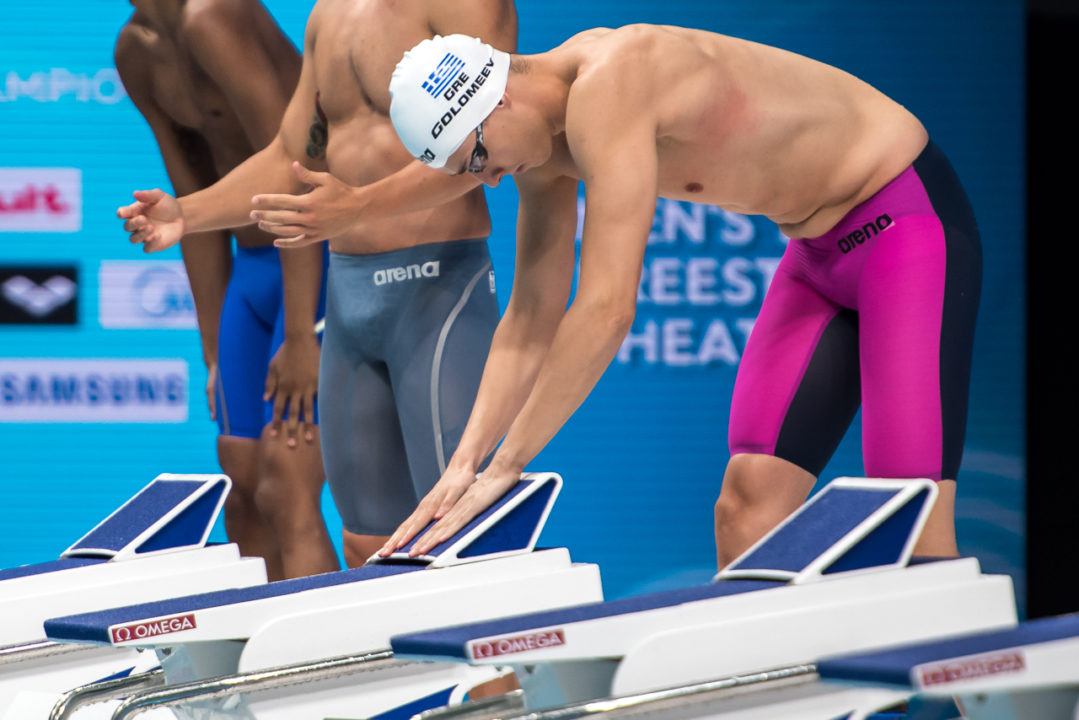 The top 3 finishers in tonight's 50m freestyle at the 2018 Mediterranean Games all threw down new national records, including gold medalist Kristian Gkolomeev of Greece. Archive photo via Peter Sukenik/www.petersukenik.com

The top 3 men racing in the 50m freestyle in Tarragon tonight all clocked new national records en route to landing on the Mediterranean Games podium.

Former Alabama student-athlete, Kristian Gkolomeev of Greece, scored his 2nd gold of these Championships, winning the men’s splash n’ dash. After posting a solid 22.37 to claim the 3rd seed out of the morning, the 24-year-old fired off a monster 21.66 to take the title tonight by .30 ahead of the runner-up.

For Gkolomeev, his 21.66 outing tonight shaves .03 off of his own personal best and former national record of 21.69 registered at last year’s World Championships.

We already reported how Algeria’s Oussama Sahnoune threw down a massive personal best of 48.00 to win the 100m free and notch a new national and championships record on night 2. The 25-year-old was back at it tonight, firing off another big swim to earn silver in the 50m sprint, clocking 21.96 to mark his first time under the 22-second barrier.

Sahnoune’s previous personal best sat at the 22.22 clocked in his training country of France last year.

Rounding out the top 3 was Egypt’s Ali Khalafalla, a former Indiana University athlete. Entering tonight’s competition, Khalafalla’s 50m free personal best was represented by the 22.22 thrown down at the 2017 Pro Swim Series in Santa Clara. The Olympian tore that time to shreds with an big-time 21.97 to capture the bronze and establish a new Egyptian national record.

All 3 men now slide into the world rankings, with Gkolomeev checking in with the 4th fastest time this season, Sahnoune with the 13th and Khalafalla tied with 3 other elite athletes for 15th.

Congrats to all, but way to go ALI!

The #3 time in the world actually belongs to a Polish sprinter (Pawel Juraszek) who went 21.45 at their nationals in May in prelims.
https://www.google.com/amp/s/www.przegladsportowy.pl/plywanie/mistrzostwa-polski-w-plywaniu-pawel-juraszek-gwiazda-pierwszego-dnia-zawodow/65wc3br.amp

In the article it actually states that the time isn’t official due to equipment issues, so Dressel Is God is right.