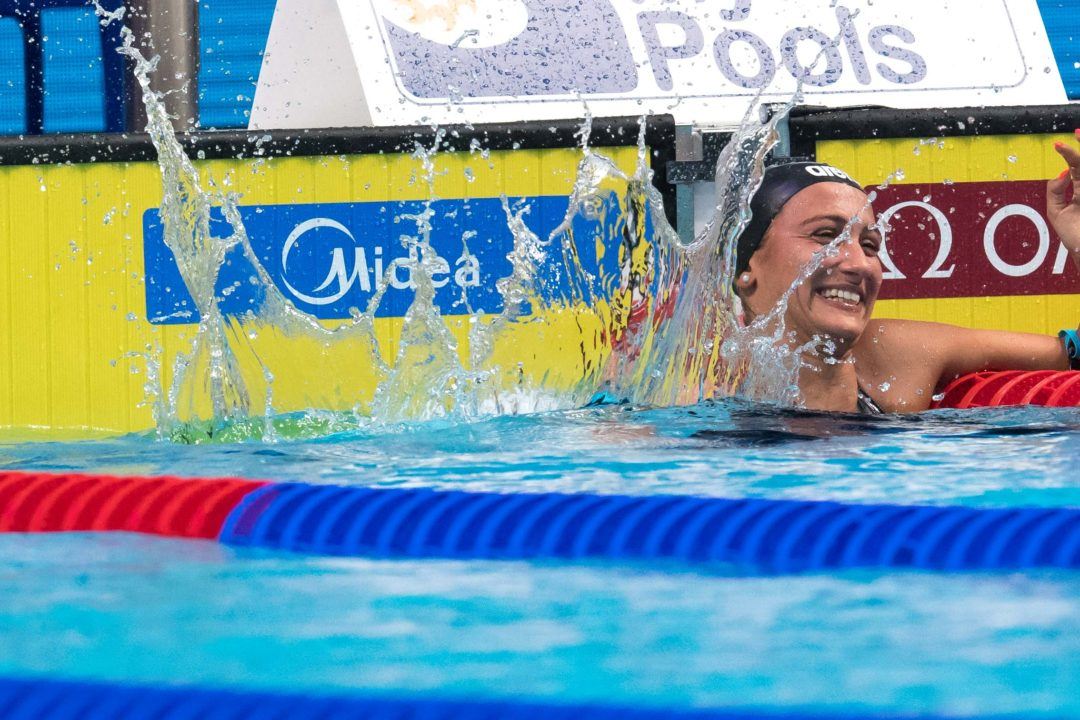 Ole Braunschweig (above) and Marek Ulrich are less than .20 off the Olympic qualifying cut in the 100 back. Ulrich, who had retired in 2018, is within .05.

Team Italy came out with guns blazing in day 1 of the 2018 Mediterranean Games. All told, the Italians captured 7 individual titles across the men’s and women’s events, giving them a clear lead in the overall swimming medal table with 2 days to go.

Among the winners tonight was 19-year-old Simona Quadarella who handily won the women’s 800m freestyle in a time of 8:21.44. This freestyle ace has been making a name for herself as of late, having won bronze in this event at last year’s European Short Course Championships, as well as bronze in the 1500m distance at the 2017 World Championships.

This year, Quadarella notched a new Italian national record in the short course version of the 1500m, clocking 15:47.33 an a domestic meet in January.

Quadarella’s 8:21.44 outing tonight easily overtakes her previous season-best of 8:25.82 set in Riccione in April and boosts the teen up to 6th in the world rankings. Also of significance is the fact that Quadarella beat home nation favorite Mireia Belmonte in tonight’s race. Belmonte, Spain’s flag bearer at these Games, settled for silver in 8:26.55, while Slovenia’s Tjasa Oder rounded out the top 3 in 8:28.91.

Belmonte was back in the pool for the final individual event of the evening, the women’s 400m IM, where the Spaniard was shut out of the hardware completely. Taking the gold tonight somewhat surprisingly was her teammate Catalina Corro Lorente, the 23-year-old who cranked out a time just shy of her personal best to wow the home crowd.

As for Belmonte, her time of 4:43.98 left her in 7th place and well off her mark of 4:37.10 performed in April at the Spanish Championships. That time remains as the 5th fastest effort of the season worldwide.

Elena Di Liddo was another Italian winner on the night, proving too fast for the women’s 100m fly field. Clocking 57.59, Di Liddo represented the only swimmer to delve into sub-58 second territory, with a fiery opening split of 27.22. That was enough to keep the necessary distance ahead of Egypt’s Farida Osman, who touched in 58.51 for silver. Greek swimmer Anna Ntountounaki was also under the 59-second threshold, capturing bronze in 58.78.

Di Liddo has been as fast as 57.75 at her national championships earlier this year, but her time tonight elevates her up a spot in the world rankings ahead of teammate and national record holder Iliaria Bianchi.

Powerhouses Piero Codia  and Matteo Rivolta battled in the men’s 100m butterfly race, just as they did at the Italian National Championships this Spring. In that competition, Rivolta touched out his teammate by just .01, clocking 51.89 to Codia’s 51.90.

The roles were reversed in Tarragona, however, as Codia struck gold in 52.25. Rivolta was just .11 behind in 52.34 to make it a 1-2 Italian punch in the race. Cleaning up 3rd was Turkey’s national record holder Umitcan Gures, who earned bronze in a time just .33 over his own national mark. He touched in 52.53 tonight to step onto the podium.