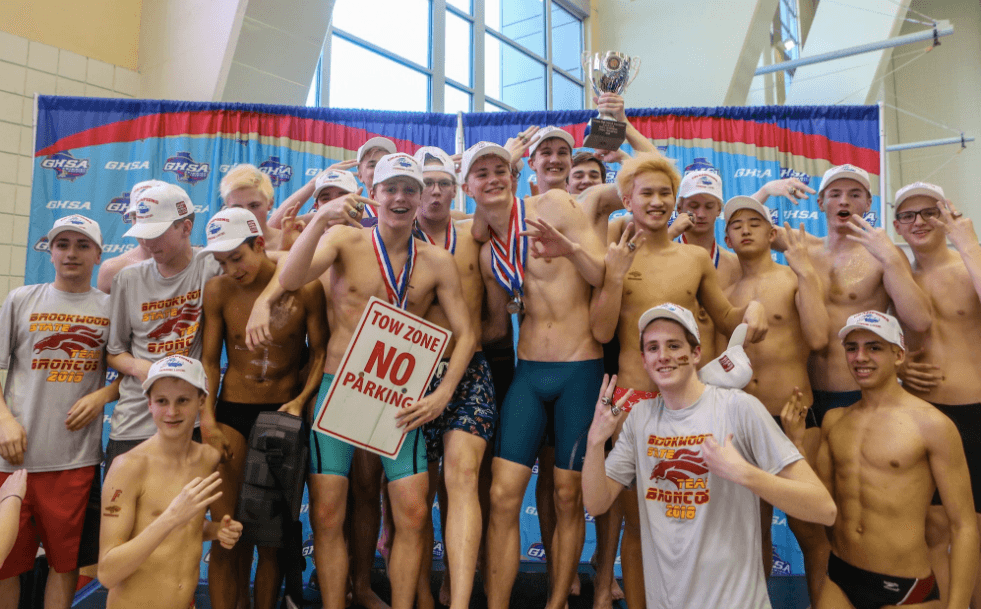 Brookwood swept both team titles in a convincing display of dominance. The Lambert girls’ team finished as the runner-up for the second year in a row, after a string of 4 straight team championship titles, showing the depth and consistency of their program. The Lambert boys’ team also finished in the top 3 for the second straight year.

Worth noting, the Brookwood boys finished less than a second off the state record in the 200 medley relay (1:33.27).

Johns Creek was the runner-up for both team titles, and merely 11 points away from being named the girls’ team champion. The Johns Creek girls and the Dalton boys both claimed the 200 medley and 200 free relay titles.

Tatum Smith of Johns Creek, a member of a very impressive University of Georgia recruiting class, secured her fourth straight individual state title in the 50 free. She won in a time of 23.38, which matches her time as a freshman (along with a pair of 23.25s as a sophomore and junior).

On the girls’ side, Caroline Aikins finished her high school career with a bang, coming home with 3 state titles. Aikins will soon join her older sister Katherine as a member of the University of Georgia swim program. She led off Lambert’s first place winning 200 medley relay in 26.33 for the second fastest split in the field. Only Kennesaw Mountain’s Addie Rose Bullock was faster (26.13). Individually, Aikins was perfect. She first claimed the 200 IM title in 2:01.34, which was almost a full second ahead of Bullock, despite Bullock’s great final leg (27.98). Notably, Aikins’ time is a new personal best by more than second. She swam a 2:02.56 at the 2016 GHSA state meet. She then went on to claim the 100 back title in 55.58, which is just .03 from her personal best. She won the event over runner-up Jami Williams of Walton by more than a second.

For the boys, Mill Creek Sophomore Jake Magahey delivered multiple jaw-dropping times. He began the meet with a 1:36.11 in the 200 free, which is less than a second away from current Florida swimmer Michael Taylor‘s state record (1:35.16). Taylor was a senior when he notched that record, and underclassman Magahey still has another two tries to take it down. Magahey returned to win the 500 free over future Mizzou Tiger Jack Dubois. His time of 4:16.88  is a new state record by almost two full seconds. Worth mentioning is that the former state record holder is Olympian and NCAA Champion Matias Koski, who swam his record time of 4:18.57 as a senior. Magahey also swam lights out in his two sprint free relays. He went 20.07 in the final leg of the 200 free relay, and a blistering 43.58 as the final leg of the 400 free relay. Magahey is quickly making a name for himself as one of the top junior swimmers in the nation.

In just about any other previous GHSA swim meet, Raunak Khosla would have been the boys’ star. Senior Khosla competed for Milton alongside Dubois, and captured two individual state titles and two new personal bests. Khosla is committed to swim for Princeton in the Fall, after being recruited by several Division 1 swimming powerhouses. Khosla won the 200 IM in 1:46.07 over Notre Dame commit Andrew Winton. The Georgia swimming community was treated to seeing two swimmers dip under 1:47 in the 200 IM at a high school meet, as Winton went 1:46.93. Khosla’s time was just over a half-second slower than Olympian Gunnar Bentz‘ 2014 state record (1:45.55).

Khosla returned to capture the crown in the 100 fly in 47.71. That time was nearly a full second faster than his previous personal best. Again, however, Khosla was kept off the Georgia record books by Bentz who went a 47.26 at the 2014 GHSA championships. Khosla also contributed a 20.61 to the 200 free relay, and a 44.85 to the 400 free relay.