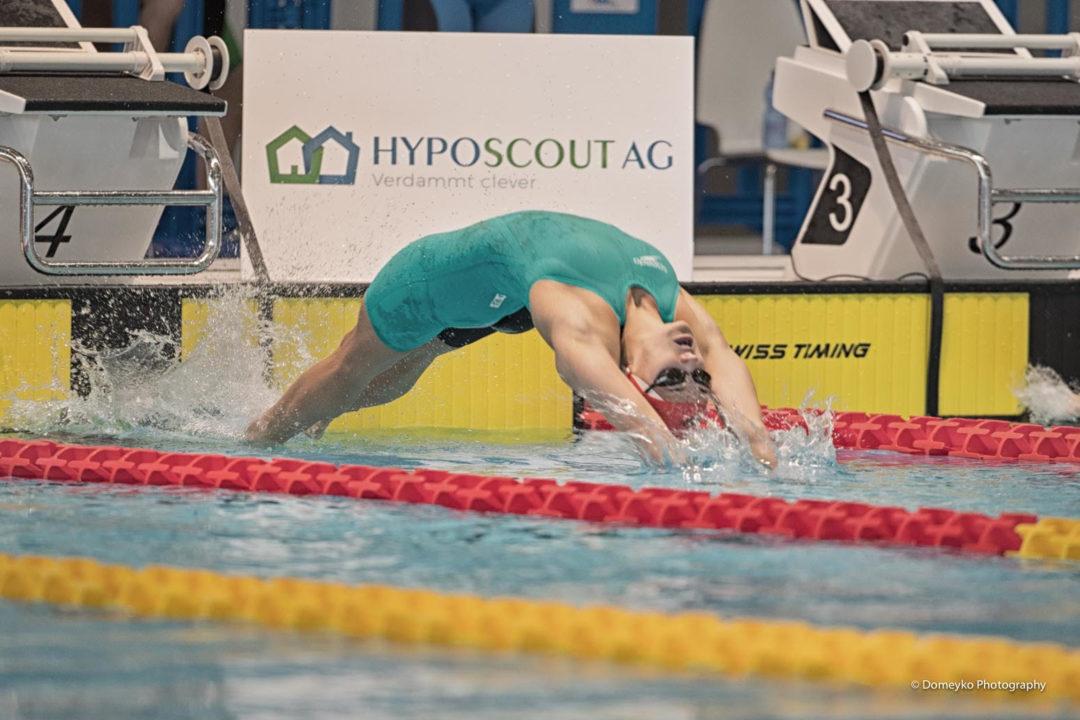 Kylie Masse flew to the wall first in the women's 100m backstroke in Uster, rocking a winning time of 58.54. Current photo via “Rafael/Domeyko Photography”

Yesterday the spectators at the Indoor Pool Buchholz in Uster Switzerland were treated to an impressive performance by Canada’s Kylie Masse, where the world record holder clocked the 2nd fastest 200m backstroke time in the world this season in 2:07.47. The 22-year-old brought the heat on day 2, giving the crowd something to behold with her 58.54 gold medal-garnering effort in the 100m backstroke sprint.

Splitting 28.58/29.96, Masse stopped the clock at 58.54 to fall within .44 of her own world record mark of 58.10 set at last year’s World Championships. The Canadian had already earned a new meet record this morning with her prelim swim of 59.37, representing the only swimmer to venture into sub-minute territory entering tonight’s final.

With her wicked-fast performance this evening, Masse scorched her season-best of 59.38 from January and rocketed up to #1 in the world rankings as the only swimmer in the world under 59 seconds. As the world record holder, Masse was already a favorite to take Commonwealth Games gold in the event ahead of Aussies Emily Seebohm and Kaylee McKeown and others, but a shiny new WR mark may now enter the conversation as a possibility come April.

Thoroughbred sprinter Ben Proud of Great Britain did major damage in the men’s 50m freestyle, firing off a super quick time of 21.52 for the victory in Uster tonight. That time would have placed 6th in the final in Budapest last year, a race in which the Energy Standard swimmer placed 3rd in 21.43. Proud’s personal best rests at the 21.32 he collected at 2017 British Championships.

Tonight’s result distances Proud even more ahead of his hunters as the #1 fastest swimmer in the world this season, a very good place to be just weeks out from the Commonwealth Games.

A battle between Hungarian teammates in yesterday’s 200m fly saw the young World Junior record holder Kristof Milak come out ahead of his veteran countryman Laszlo Cseh. But, the tables were turned tonight, with Cseh finishing with the gold in 52.58 ahead of Milak’s 52.63. Cseh was 52.51 in Luxembourg last month, while Milak had yet to contest the event this year. Both men are positioned within the world’s top 10 to this point in the season.

Canada’s Penny Oleksiak made some magic in the women’s 200m freestyle, cranking out a solid time of 1:57.79 to easily take the gold as the only swimmer of the field to venture into sub-2 minute territory. In fact, her outing tonight checks in as the 17-year-old’s 2nd fastest of her career, falling just .2 shy of her own 1:57.59.

With her effort tonight, Oleksiak sits just outside the world’s top 10 in the event, a list which includes Canadian teen teammate Taylor Ruck occupying the 6th spot. Against the likes of Aussies Emma McKeon and Ariarne Titmus, Oleksiak’s progression in this distance sheds positive light on the Canadians’ 4x200m free relay chanced in the Gold Coast.

Kylie Masse already within half a second of her world record? Racing a sub 58 time at some point this year now seems all the more likely. Looks like Penny’s on track to having a good 2018 as well.

It’s worth mentioning Oleksiak also got silver in the 50m freestyle. Despite 50’s not being her specialty at all, she won silver in both the 50 free and 50 fly this weekend. Not bad at all.

58.54 made my eyes bulge – Very, very difficult to see Masse losing a 100bk race at world level right now. What a brilliant advert for perseverance too; This is what can happen if you keep working hard and let your body mature at its own pace kids.

Ben Proud looks utterly fantastic; Just as impressive as Masse at this meet. If anything, his start has improved from last year. It really caught my eye that this year he is hitting the water a foot or two further into the pool than those around him, similar to Dressel last year. A big swim is coming up in April.

If you look race footage, Proud always looks like he’s doing that against most of his competition. That’s why it was generally accepted he had the best start in the world. It wasn’t until Budapest where we saw Dressel hit the water even a bit ahead of Proud that we could see the difference in their starts.

No doubt, but Proud has improved both visually and on the scoreboard this year. He has a very good chance of revising his PB (21.32) either at commies or Europeans this summer.

You could almost say the only question is when. Will she do it at the Commonwealth Games, the Pan Pacific Games, or both?

Those 2 Big Meets will be very exciting to follow , no doubt about it .