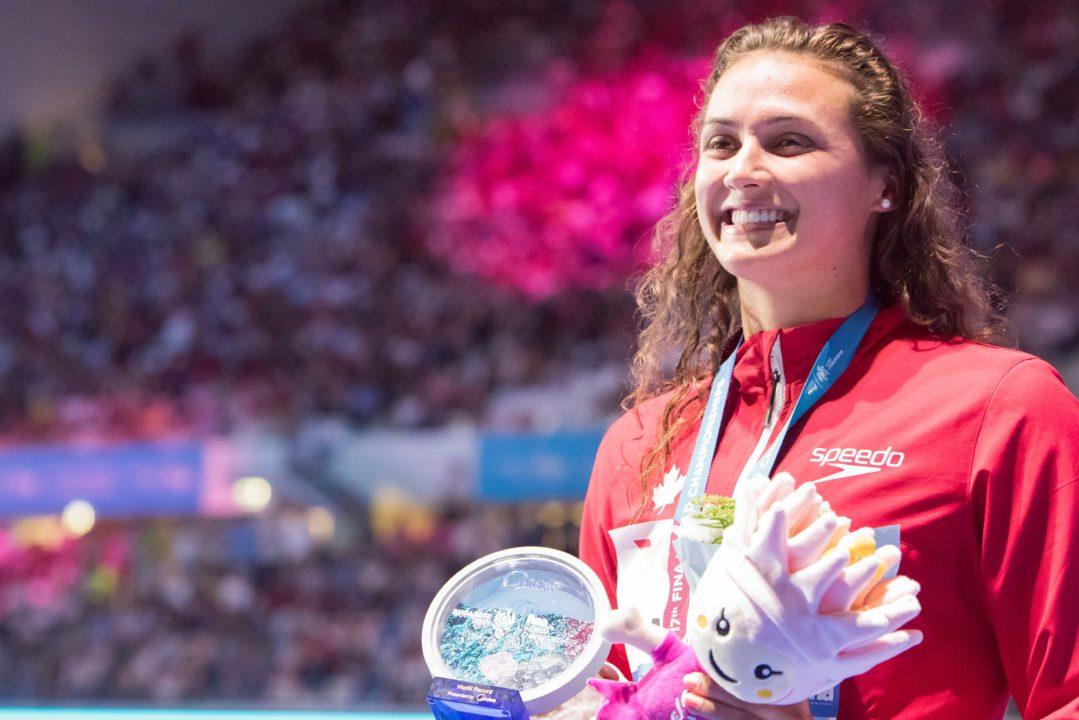 Canada's Kylie Masse rocked a 2:07.47 meet record-setting 200m backstroke in Uster, as just one of several meet marks that went down on the night. Archive photo via Mike Lewis/Ola Vista Photography

Senior Daniel Carr led a quartet of Cal swimmers advancing to the championship final of the 100 backstroke on Day 3 at Men’s Pac-12s in Houston.

The 2-day International Meeting in Uster, Switzerland kicked off with a new meet record at virtually every other turn, as this year’s men’s and women’s fields contained stellar talent from Europe, Japan and Canada.

World record holder Kylie Masse was among those record breakers, as the Canadian earned a new 200m backstroke mark en route to gold in the event tonight. After a solid morning effort of 2:10.35, the 22-year-old representing Toronto pushed her time to the 2:07.47 mark in finals to collect the gold in a new meet standard time. She owned the previous meet record mark in 2:10.35 from 2017, so the World Championship medalist was almost 3 seconds faster from last year to now.

Masse’s outing tonight represents the 4th fastest time of her career, giving a good indication of what she may be brewing come April at the 2018 Commonwealth Games in the Gold Coast. Her effort now ranks as #2 in the world, only behind her young countrywoman Taylor Ruck.

Her Canadian counterpart in Olympic champion Penny Oleksiak also got the job done big time in Uster, taking the women’s 100m freestyle in a new meet record. She positioned herself as the 2nd seed behind France’s Marie Wattel in the morning, but took things up a notch to earn gold tonight in 53.94, the only sub-54 second time of the field. Splitting 26.00/27.94, the 17-year-old overtook the old meet mark of 55.10 set by Swiss Maria Ugolkova last year. Wattel wound up touching in 54.53 for the silver behind Oleksiak, while bronze went to Ugolkova in 55.40.

However, in the pair’s next sprint duel in the session, Ugolkova wound up on top, taking the women’s 50m butterfly gold over Oleksiak. 26.03 is what it took Ugolkova to top the podium, out doing the old meet record of 26.42 Oleksiak set just this morning. Tonight, the Canadian finished in 26.11 for 2nd place.

Hungary’s Liliana Szilagyi owned the women’s 200m butterfly race tonight, edging the field by a 3+ second margin when all was send and done. Szilagyi finished in 2:09.35 for a new meet record, while Great Britain’s Holly Hibbott settled for silver in 2:13.06.

Hibbott had already raced an impressive 400m freestyle earlier, however, lowering her own meet record set in the morning prelims. This morning the Stockport Metro swimmer clocked a time of 4:17.60 to lead the pack, while Hibbott dropped almost 7 seconds to notch a winning effort of 4:10.91. Hibbott has been as fast as 4:06.37 to take the national title in April of last year.

Kristof Milak of Hungary was another swimmer who took on the 400m free/200m fly double, coming away with 2 golds for his performances. In the former event, the World Junior Record holder notched a time of 3:55.92 to slide under the old meet mark of 3:56.22 set by Alex Di Giorgio last year.

In the men’s 200m butterfly event, Milak took on his elder Hungarian teammate in Laszlo Cseh, representing just one of the 3 fly events in which the pair will meet at this competition. Milak produced a solid time of 1:56.77, while Cseh finished just under the 2-minute mark as well in 1:59.64. Both men were the only swimmers to delve into sub-2 minute territory.

Finishing the night with a bang was Japan’s Shinri Shioura, who produced an impressive sub-49 second outing in the men’s 100m freestyle. Clocking the only time under 50 this morning, Shioura stepped things up in the final to rock a wining time of 48.89. That’s just off the 48.81 Shioura threw down at the Euro Meet Luxembourg, which currently sits as the 8th fastest time in the world this season.

As I may have previously suggested, the Commonwealth Games have now become interesting to me. Sprint Aussies vs Sprint Canucks and Backstroke Aussies vs Backstroke Canucks. And the swimming events atmosphere in Gold Coast is likely to be electric.

I’d be surprised if Canada beats Australia in the women’s 4x100m freestyle relay (they were close in the 4×200 in Rio so they might have a chance there), but those two countries are pretty much guaranteed to dominate everyone else in all of the women’s relays.

I would be surprised too, but that’s why I’m interested. Canada’s young girls seem like gamers with nothing to lose vs The Campbell Dynasty…my bet is the Canucks give the Aussies one hell of a race in the 4×100 Free, could legitimately win the 4×200 Free, and then the 4×100 Medley will likely come down to the breaststroke…I don’t think either country currently has a 1.05 breastroker (heck or a 1.04 like the USA in Lily King)…but when matching Seebohm/Masse (Back), Mckeon?/Oleksiak (Fly), C1/Ruck (Free)…should be a treat!

100% agree that the womens relays at CG look to be AUS v CAN slugfests with ENG bronze but not in the same post code.

A full strength AUS W4X100 (ie one with a fully fit C2) would still probably have the edge over CAN …. and quite possibly USA but with C2 currently back to being a 52mid split at best; this race at CG is opened up, especially if either both Oleksiak & Ruck made forward progress.

W4X200 is anyone’s guess as it will all revolve around the lesser seeds for both. Oleksiak does potentially negate McKeon but will Titmus be a 2nd power leg/if so can CAN counter this ?

4xMED will most likely hinge on who’s… Read more »

I’d be surprised if the Canadian Record in the women’s 100m freestyle doesn’t get destroyed at some point this year. Despite having a shoulder injury last year, Oleksiak wasn’t far off it in Budapest, and Ruck’s been under 53 seconds now too.

Ben Proud continued his fine form from the Euro meet in the 50 fly, this time dipping under 23 seconds. Wonder if he might produce something special this year…

Penny Oleksjak looked very “heavy” in 100free race. I was surprised to see that she was actually under 54 sec.

Sure. But let’s dream big. Why not a world record. 😀
She is not easy to predict now. Her progress in 2016 was much clearer and two in a row 52.7 were not a shocking surprise. The camera wasn’t good today but she looked mature – not a schoolgirl anymore.

I don’t think you can judge in-training races very well other than observing which athletes respond consistently to in-training racing results on a consistent basis. Sjostrom is a pretty good example of this…same with Hozzu.

I’m not judging at all and I wish Oleksiak to be very fast in two months. Just wasn’t impressed how her second half looked like at 100 free. That is where she was superb two years ago. And that is what improves first if the tapering performed correctly.
It is very easy to be mistaken with the “judgment”. After Rio I thought that Manuel’s 52.7 was a fluke and Oleksiak’s one was a warming up of inexperienced yet extremely talented girl. Today I’m more cautious with predictions. There were some injuries last season and she gave no hints yet since Rio what she is up to. Has she gotten more muscular or I got a wrong impression? I think… Read more »

You thought Manuel was a fluke??? LOL wow. She always shows up when it counts the most!! Manuel for gold 2020!

Yes, I thought that she was more surprised with her 52.7 than with the gold medal. I thought she would bounce back to 53 flat the best. Her 2015 season was very unimpressive and not only me but many here considered Weitzeil #1 American sprinter. Well, as I admitted already I was mistaken. But don’t tell me that in Aug 2016 you foresaw 52.27, because it wil really make me LOL.

Her 2015 summer was also her 1st summer training at Stanford with a new coach. Maybe it took time to get adjusted like others who leave home for college.

I didn’t think Manuel was surprised by her Rio 52.7…but maybe surprised that 52.7 co-won the Gold…that was a crazy race…and not that fast compared to Sjostrom and C1 portfolio.

Manuel seems uber athletic with really long arms…she catches a ton of water and the 52.2 seemed to be the result of the same catch with a little more tempo…that’s the secret sauce and I feel she will get faster.

Ruck is interesting…tall girl with slender athletic build w same long arms that can/should be added to with pure strength and connectivity. Yet at only 17 she has raw speed of sub 53 with what appears to be a tremendous amount of upside and improvement to come. To… Read more »

I see your point, but my interest in CWG’s stems a lot from the youthful enthusiasm that the young Canucks had at 2017 World Juniors…and it included Oleksiak.

They seem like a procosious bunch…and it appears as though they feed off each other…as observed at WJ’s. They were completely dominant and appeared to have a ton of fun.

I will predict we are in for a good show…talented youthful exhuberance with nothing to lose vs a seasoned mature group…all in a crazy exciting atmosphere…of course I don’t mean to take away from the Aussies youth in McKewan, Atherton, Jack, Titmus, and others.

Let’s hope so…would be great for women’s swimming prior to Pan Pac’s.

She seems to be much heavier. She has had very few races, hard to judge how she will do. She has changed schools and coaches this year. Last year of high school for her. Perhaps she is training a bit less. Hope she continues to improve.

That’s called muscle. In a recent Tedx talk interview, she talked about how her current coach is pushing her to be more aggressive in her weights training. Her brother is an NHL player who looks like a 6’7″ body builder, and both of her parents were athletic. It’s no real surprise that she’s built up some muscle lately.