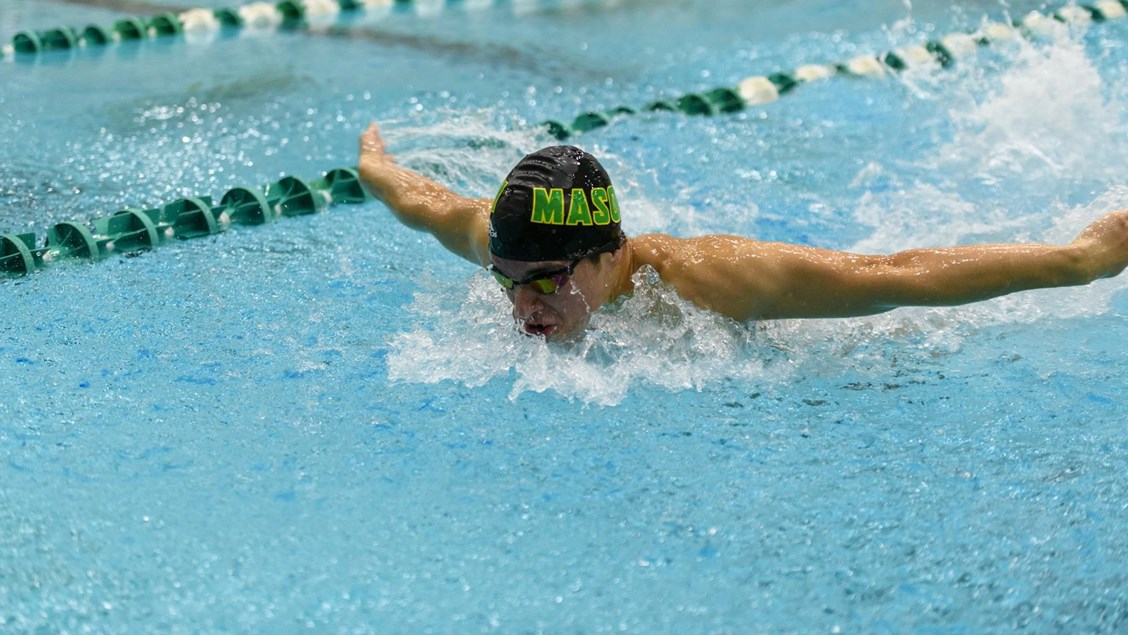 FAIRFAX, Va. – The George Mason men’s and women’s swimming and diving teams swam in their first dual meet of the 2019-20 season on Saturday at the Rawstrom Natatorium in Newark, Del.

On the men’s side, the combination of seniors Logan Eubanks and Christopher Stankiewicz, junior Devin Truong and sophomore Will Rastatter won the 200-yard medley relay (1:34.48).  Stankiewicz took first place in the 100-yard backstroke (58.58) with freshman Jake Ball right behind in second (1:00.02).

In the final event of the afternoon, the team of Donnelly, Moretz, Peck and Ashton won the 400-yard freestyle by nearly three seconds (3:07.70).

On the women’s side, sophomore Jacquee Clabeaux won two events.  She took the top spot in the 50-yard freestyle (23.82), while sophomore Chloe Fite was third (25.29) and sophomore Ariana Lewis placed fourth (25.33).

In the 200-yard freestyle, sophomore Laura Hodge just missed the podium with a fourth-place finish (1:57.34).  Sophomore Annie McNenny placed fourth in the 200-yard butterfly (2:12.10), missing the podium by a tenth of a second.

The Patriots are back in action at the Richmond Duals Oct. 18-19 in Richmond, Va.

“This was a fantastic way to start our 2019-20 season,” said head coach Pablo Marmolejo. “Our swimmers and divers have put in a lot of work in the last few weeks and it is showing. I am very proud of how much this group has been able to push each other and believe in the process that we are going through.”

The Blue Hens got off to a fast start, capturing the first event of the day when the relay team of freshmen Victoria Ambrose, Marietta Gately, Christine Gallagher, and Natalie Dobrzykowski were timed at 1:48.84 in the women’s 200-yard medley relay in their first career races.

All-in-all, the Delaware women won 13 of the 15 events. Two of the top returners, sophomore Taylor Draganosky and senior Ellie Jogani each swam to two wins of their own.

The Blue Hens return to action in Rawstrom Natatorium Oct. 19 when they host both UMBC and Johns Hopkins with the first event scheduled for 1 p.m.