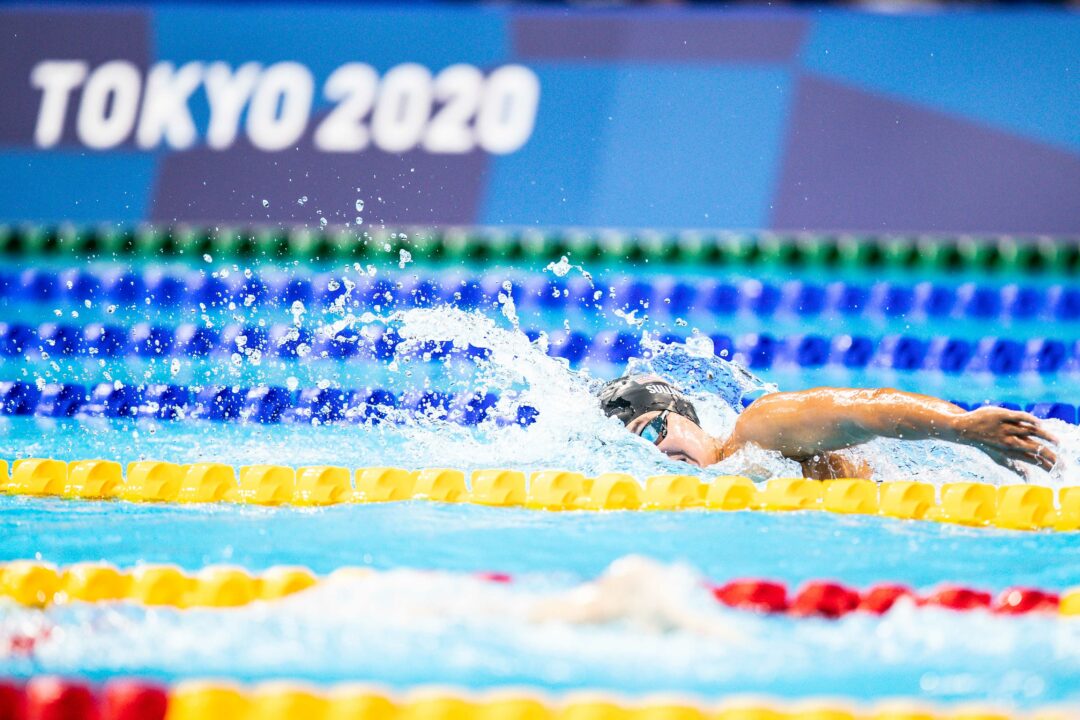 Last year the Texas women’s “Dust Off Your Boots Invitatioanl” was essentially an intrasquad, but this year it took the form of a dual meet, as both of Incarnate Word’s teams heading to Austin. The host Longhorns defeated the Cardinals 212-81, with Texas touching first in every event.

Over three years after graduating high school, Olympic silver medalist Erica Sullivan finally made her college debut. Sullivan initially committed to USC for the fall of 2018, but postponed matriculating there several times, then finally changed her commitment to Texas for this year. She made the most of her collegiate debut tonight, sweeping the distance freestyles.

Fellow freshman Ellie Andrews swept the breaststroke events with times that were much closer to her personal bests. She took the 100 breast in 1:01.40, just over half a second away from her lifetime best in that event, and then she won the 200 breast in 2:13.53, less than three-tenths shy of her lifetime best in that event. Andrews also split 28.30 on the breast leg of the Longhorns medley relay, recording the fastest split in the field by over a second as the Longhorns won in 1:39.96 to open up the night.

Kelly Pash also doubled up for Texas. The junior won the aforementioned 200 free with a 1:47.11, a solid time for early in the season. She also hit 52.72 in the 100 fly to win that event by over two seconds towards the end of the meet. Not long after that, Pash anchored the Longhorns’ 200 free relay in 22.38, en route to a 1:31.34 victory in that event (although Texas chose to exhibition the points).

The Longhorns also got an 8-second win from Emma Sticklen in the 200 fly (1:56.24) and a 4:16.22 win from Evie Pfeifer in the 400 IM (although that was also exhibtioned). Bridget O’Neil and Hailey Hernandez won the 1m and 3m diving events, respectively.

Without taking into account exhibitioned events, Incarnate Word’s best showing came from a pair of 3rd-place finishes. Kirsten Srasza touched 3rd in the 100 back in 56.87. r in the 200 breast, where Mariana Ruvalca touched 3rd in 2:21.73.

AUSTIN, Texas –  Freshman Erica Sullivan put on a show in the 2021-2022 season opener at the Dust Your Boots Off Invitational, winning both the 1000-yard and 500-yard event. Friday night’s meet was also highlighted by six meet records by the Longhorns at the Lee and Joe Jamail Texas Swimming Center.

Freshman Hailey Hernandez debuted for the Longhorns with a school-record performance in the 3-meter diving event.

The Longhorns return to action on Oct. 15 in a dual meet at Texas A&M. Start time of the meet will be announced at a later date.

She was listed in the live stats but just as a DNS.

Sorry for the definitely novice question. What does it mean to “exhibition” events? How/why is that decision made? It seems to happen after the meet is mathematically secured. But I still don’t get why?

Texas has done this for years. Once they mathematically win, they exhibition everyone so the score doesn’t look bad for the other team. It’s just the Texas way. I’m not sure if other teams do this.

3 swimmers are allowed to score points per team. It is decided before the race is swum who is swimming for points.

Teams will exhibition swimmers when the meet is utterly one sided… as a sign of respect / sportsmanship for their opponent.