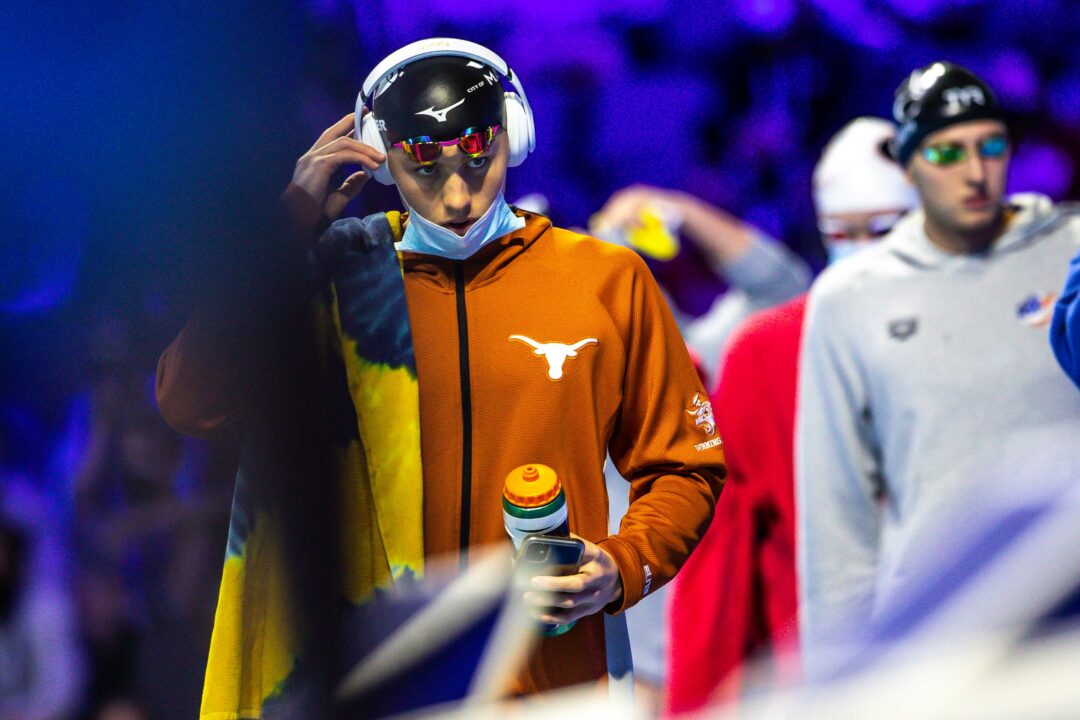 Two weeks after throwing down the normal (for that meet) fast times in their annual Orange-White intrasquad, the Texas Longhorn men got their dual meet season underway by hosting Incarnate Word.

Sophomore Carson Foster dabbled in some long course distance free events this summer after just missing an Olympic berth in the 400 IM, and tonight he made his college 1000 free debut with a 8:59.93 victory in that event. As of the moment, that’s the fastest time in the nation in this still-very-young season. According to the SWIMS database, that’s the only second time he’s ever swum that event, with his previous swim being a 10:26.79 effort back in 2014 when he was 12. Foster battled his classmate David Johnston, who is primarily a distance freestyles, nearly stroke-for-stroke throughout the race, with Johnston touching 2nd in 9:00.88. Foster and Johnston also went 1-2 in the 400 IM, with Foster winning that 3:46.15 to 3:49.33.

As evidenced by the 1000 free and the 200 free, Texas swimmers competed in a mix of their strong events and off events, which helped lead to some odd results.

Meanwhile, Peter Larson, who’s primarily a middle-distance freestyler, but has a strong backstroke resume as well, won the 100 back in 49.63, and he also won the 500 free in 4:31.12. Carson Foster was disqualified for a false start after touching in 4:23.59.

US Olympian Jordan Windle swept the 1m and 3m diving events for the Longhorns. Texas put a team under 1:20 in the 200 free relay to close out the night, with Caspar Corbeau‘s 19.66 anchor leg the fastest split in the field.

AUSTIN, Texas –  The Texas men’s Swimming and Diving team picked up where they left off the 2021 season, in winning fashion. The Longhorns hosted Incarnate Word at the Lee and Joe Jamail Texas Swimming Center and earned 13 event wins in the occasion.

Friday’s season opener featured spectacular showings across the board to give Texas its first win of the season.

The Longhorns return to action on Oct. 15 in a dual meet at Texas A&M. Start time of the meet will be announced at a later date.

Would be interesting if he does the 500 at NCAA

Looks like Carson is starting to swim more longer freestyle events. Made the national team in the 400 free, going best times in the 500/1000 early in the season. I wonder what this means for him, I don’t think he will race the distance events tapered, but working on endurance will help the last 50 of his 400 IM, where he has been run down multiple times.

Seems like Eddie likes to have a lot of his incoming stars swim the 500 free at NCAAs. Conger did it freshman year when he was a 1:55 LCM backstroker, Katz the same. He must believe that it’s an “aerobic base” thing that helps their primary events.

Conger was 4:13 in high school when guys were winning NCs in 4:10-4:11. Think it was just a matter of what they thought his best events were.

That is consistant with Eddie’s opinion that age group swimmers should focus on long and slow swimming (aerobic base) and compete primarily in 500 free.

It would be interesting if he were to get to the 4:08-4:11 range in the 500 around midseason to see what Eddie does on that first (individual) day of NCAAs. 200 IM is by no means an automatic win with Gonzalez and Lasco both returning for Cal, and Magahey & Smith have the makings to be top two in the 500. Realistically could see third place in either event as a possibility, which could then depend on where the Texas team has a bigger hole.

2
0
Reply
So confused
Reply to  Doconc

Do divers ever dive “off events” or rather “off dives” maybe that are significantly easier or significantly more challenging from their routine lineup?

Yes. There are not many events in diving so choices are limited, the big one being springboards and or platform. Rarely would divers waste competition time doing super easy dives when they could be pushing the envelope and trying something new and more difficult that could get them more points.

I can’t say never, but culturally, no, not really.

Diving is so much about ‘prescision,’ that repetition of the same dives is more important than any value that would come from an ‘off’ event. Plus, if it’s not something you’re training regularly, there’s an increased risk of injury, especially when it comes to platform.

So you might occasionally see a diver who is working on a 7th dive or something, something they’re considering for NCAAs or similar, but in general you wouldn’t ‘try something’ at a meet. You’d ‘try something’ in practice, work to get really good at it, and then it wouldn’t really be an ‘off event’ when it came meet time.