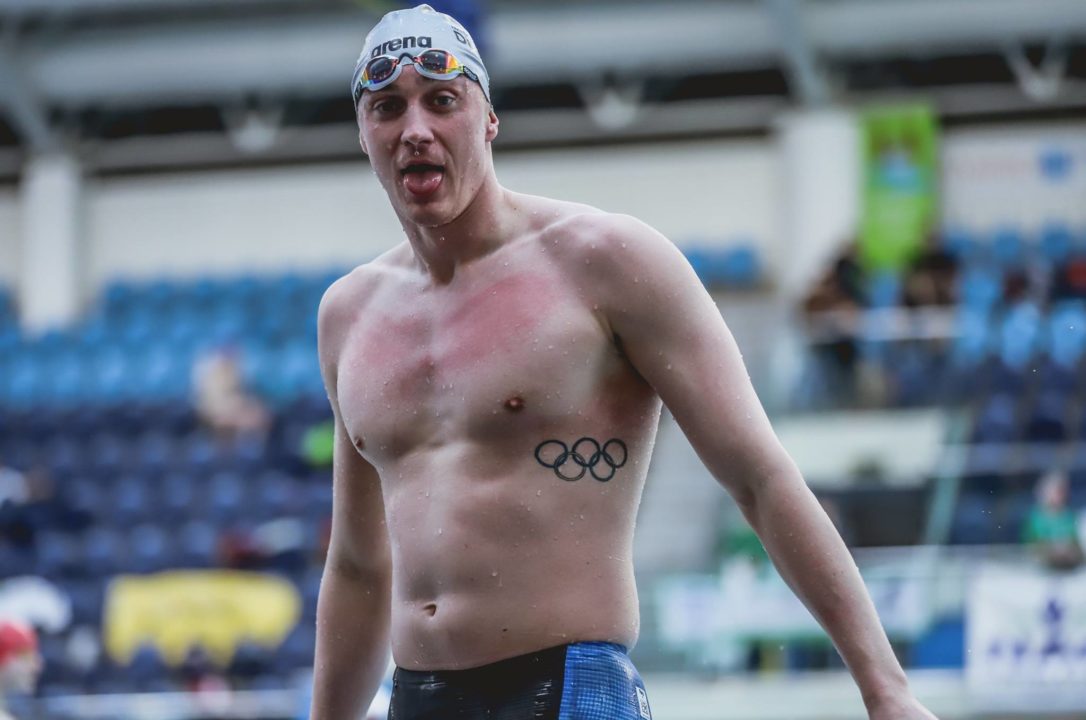 Shane Ryan pulled out of the 100 back at the last minute in Tokyo but made a comeback on day 6, downing a national record during the 100 butterfly heats. Archive photo via David Kibern

Despite being known more for his backstroke abilities, Irish swimmer Shane Ryan broke a national record in the men’s 100 butterfly during day 6 prelims at the 2020 Olympic Games. Ryan delivered a 52.52 in the event, but he won’t advance into the semi-finals as he tied Czech swimmer Jan Sefl and Austria’s Simon Bucher for 37th place.

The swim for Ryan got him under training partner Brendan Hyland‘s 52.58 national record in the event and took roughly half a second off his own PB of 52.94 from December 2020.

2008 and 2012 Irish Olympian Melanie Nocher offered a race breakdown after Ryan’s swim which can be seen below:

Nocher discussed the fact that Ryan was able to throw down a strong 100 butterfly performance despite his withdrawal from the men’s 100 backstroke on day 2 of the meet due to a shoulder injury. Ryan withdrew from his main event at the Games which he would have entered as 25th seed in a 53.73.

At the time, Ryan shared on Instagram the following message regarding his decision to drop the 100 back:

“I am extremely disappointed and frustrated to no longer be swimming the 100m Backstroke at this Olympic Games, particularly as it is my main Olympic event.

“Unfortunately, this is a difficult decision that has to made in high performance sport at times and something that many athletes have to deal with at different stages of their athletic careers. Unfortunately for me, it is a decision that we’ve had to make at the biggest event.

“I’ve struggled with pain in both shoulders when swimming backstroke for quite some time now and I am so grateful that I have an amazing support team who have helped me through the whole process. Despite trying everything we could before the Games, there was nothing more we could do – and so we came to this difficult decision.”

While he didn’t race the men’s 100 back prelims during day 2 of the meet, Ryan was back in the pool 2 days later to swim the men’s 4×200 freestyle prelims with teammate Jack McMillan, Finn McGeever, and Brendan Hyland. The quartet wound up placing 14th overall in the heats with a 7:15.48, meaning that they failed to advance to finals.

Ryan produced a 1:49.08 anchor leg for the Irish men’s relay which was quicker than the 3rd leg Hyland (1:51.28) while trailing McMillan’s opening split of 1:46.66 and McGeever’s 1:48.46 that followed. The men were a little slower than the Irish record of 7:12.00 that McMillan, McGeever, Jordan Sloan, and Gerry Quinn swam at the 2021 European Championships.

Is is still legal to swim the elementary backstroke at the Olympics?

Edit – Daniel Wiffen and Mona McSharry on that last paragraph instead with the 800 free and 200 brst records.