by Anne Lepesant Off

Thursday, August 15th, 2019 marks the 10th birthday of the launch of the Fitter and Faster Swim Tour. What began as a humble solution is now the premier swim camp producer in the country, having served over 100,000 swimmers since its founding. 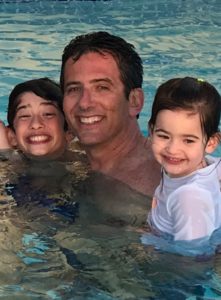 Fitter and Faster is the brainchild of David Arluck who in 2009 came up with the concept to address two perceived needs in the industry:

Swim clinics existed before 2009, but they were paid for by teams, so only the clubs with the biggest budgets could host them. They tended to be very large affairs, not particularly specialized, and led by Olympians who may or may not have been effective teachers. At the same time, Arluck, who co-founded The Race Club with Gary Hall, Jr. and represented several Olympic swimmers, observed that there were dozens of elite-level swimmers who were rarely, if ever, asked to do clinics. Very few of them had corporate sponsorships in that pre-social media world of 2009, and USA Swimming was not yet paying stipends to their National Team athletes. Arluck conceived of a model that would bring these two worlds together, driving more exposure for a broader group of elite swimmers while providing a first-class service to the grassroots of swimming. 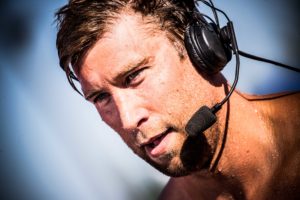 The first clinic was on August 15, 2009 in Seattle. The next day they headed to Portland. A week later they were in Chicago. Then, they were off to Long Island, and Philadelphia. From there, the tours exploded. Among the first clinicians to lead the clinics were Olympians Matt Grevers, Christine Magnuson, and Peter Vanderkaay.

From the outset, Fitter and Faster sought feedback from swimmers, parents, coaches, and clinicians to improve the experience for everyone. They quickly learned that just because an elite swimmer is fast doesn’t always mean they are a good clinician. Fitter and Faster cultivated relationships with the clinicians who had the best feedback from participants. These clinicians learned from the assessments, improved their teaching skills, and received more positive feedback on surveys. Meanwhile, participants were learning to swim faster and more efficiently.

One of the earliest and most popular clinicians was two-time Olympian Chloe Sutton. She began working with Fitter and Faster in 2010 when she was just 18-years-old.

“My first swim camp was with Ian Crocker,” she told SwimSwam. “I remember having breakfast with him at the hotel before we went to the pool and talking about what we would teach. I was 18 and a bit nervous. When I started teaching, it felt incredibly natural. I remember having so much fun. Every camp I did while I was still competing gave me a new refreshed love for swimming that got me through the hard workouts. Seeing how excited the kids were to learn gave me that same desire to keep learning and to keep swimming.” 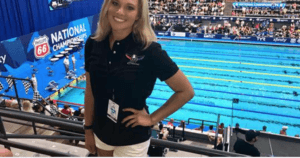 Sutton eventually took over Fitter and Faster’s social media, before being promoted to marketing manager and eventually vice president in 2018.

One of the things that set Fitter and Faster apart from the beginning has been the level of individual instruction by the clinicians. Rather than lecturing to a large group of students, the clinicians get in the water with the participants, demonstrating techniques and connecting with the swimmers.

“[The clinicians] took the time to talk to each child and to help drive home the point of all the drills,” one parent commented. “Several times a student or 2 would be pulled away to practice something a little deeper and was always given credit for a job well done. I loved the positive reinforcement and I loved how well my daughter was taken care of. She was the slowest swimmer but still walked away feeling like a winner due to the positive words and high fives the clinicians gave to her.”

Clinics are generally designed in coordination with the host team’s coaches in order to tailor the instruction to the team’s needs. Topics range from starts and turns, to single-stroke clinics, to video filming and analysis, to speed and power. Swimmers have the opportunity to learn from Olympians and other elite-level clinicians who are as enthusiastic as they are knowledgeable. 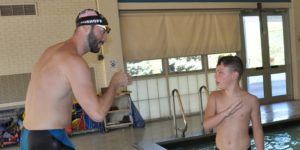 Austin Surhoff, a Fitter and Faster clinician and former University of Texas star, told SwimSwam about what his swimmers learn from working with him: “They can learn about ‘details under duress.’ Every single swimmer I work with, whether it’s a 10 year old that just wants to make a state meet, or a college kid that’s won an NCAA title, can get better at doing the little technical things right no matter how tired they get in a race. It’s the first thing to go when you are exhausted — the streamline loosens, you take less kicks off the last wall, you breathe the stroke before the finish. It is important to me to make people aware of these little details, and get better at doing them when it feels like they have nothing left to give.”

Carolyn Neri, the mother of Texas swimmer Parker Neri, was instrumental in hosting three Fitter and Faster Swim Tour clinics with Upper Arlington Swim Club. She noted, “At every clinic we hosted, I always enjoyed watching how upbeat all the athletes were with the kids & parents. Chloe Sutton, Ian Crocker, Josh Schneider, Megan Jendrick, Mark Gangloff, Tyler McGill & Claire Donahue, each of them with their own stories & personalities brought something different to the clinics we hosted. What was not unique was how engaged they all were with the kids, humble, enthusiastic, full of praise & always plenty of high fives to go around.”

In addition to providing inspiration to young athletes, the clinicians benefit from the clinics as well. In the early days, before social media gave everyone their own marketing platform, participating in the clinics helped the clinicians gain exposure. Many of the clinicians who previously wouldn’t have been considered for corporate sponsorships were being asked to represent various brands. Fitter and Faster opened up marketing opportunities for a level of competitive swimmers that had never before existed in the sport. In addition, many of the clinicians discover they love teaching as much as they loved racing. Sutton said, “Fitter and Faster has helped me to find out that my passion was more than just swimming; my true passion is swim camps. Every participant that attends a swim camp leaves with new knowledge of how to swim faster as well as a feeling of endless possibility. I feel like I am living my purpose every time I walk on deck in my Fitter and Faster t-shirt.” 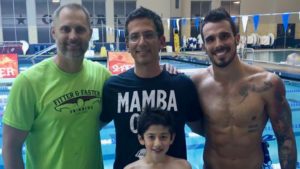 In mid-2018 Arluck and Sutton, who had been Marketing Manager since 2016, created a number of new camps that sold out quickly. Arluck attributed their success to well-thought out curriculums and better strategizing with local teams. In August of that year, Arluck promoted Sutton to Vice President of the company. In November 2018, two-time Olympic swimmer and three-time Olympic coach Brett Hawke was brought on as Director of Camps. Hawke, the former head coach at Auburn University and director of Auburn Swim Camps, works with Arluck and coaches around the United States on curriculums. He also mentors and hires new clinicians.

In 2019, Fitter and Faster will have more camp sessions than the previous four years combined: over 1,200 sessions of swim clinics in 47 states plus Canada and the Bahamas. Each session now focuses on a narrower set of skills and topics so that participants retain more. Fitter and Faster visits each region more often to provide a broad range of topics from which participants can choose. There are swimmers who attend 10 to 20 -or more- Fitter and Faster swim clinics sessions a year. Most swim families have several camps annually within a one- or two-hour drive, but some travel up to ten hours by car for a camp with a curriculum that appeals to them. Others plan their vacations around camps in desired destinations. More than a dozen families have also traveled from outside the United States to attend Fitter and Faster camps from countries including the United Arab Emirates, India, Thailand, Australia, and the United Kingdom.

Fitter and Faster has been the leading swim camp company in the United States since 2011 but has really taken off over the past year because of its commitment to excellence at every camp. Arluck says “we have a pretty efficient system of handling logistics and getting prepared for each clinic. We’re at the point now where we can really focus on being creative and keep innovating our curriculums to provide the best learning experiences in the world for competitive swimmers of all ages and abilities.”

The results speak for themselves. One parent put it best, “Fitter and Faster Swim Tour gives your swimmer a plethora of knowledge from those who know swimming best! Each clinic lends itself to a new host of skills and experiences based on the level of your swimmer. The clinicians are so personable and make every child feel welcome and open to their advice/suggestions. Any Fitter and Faster Swim Tour experience is priceless!” 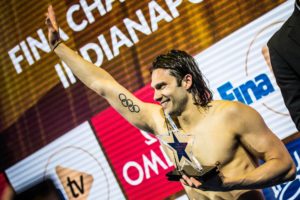 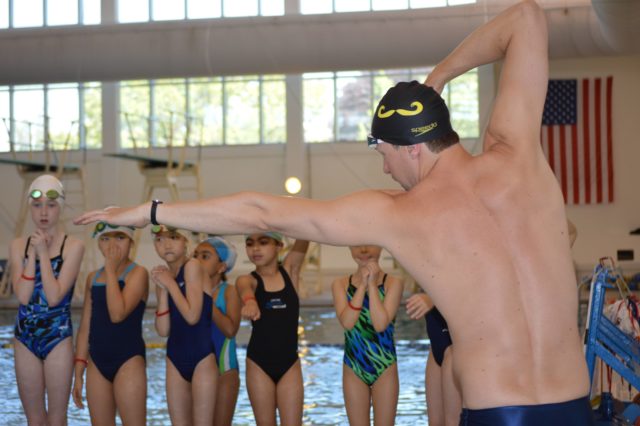