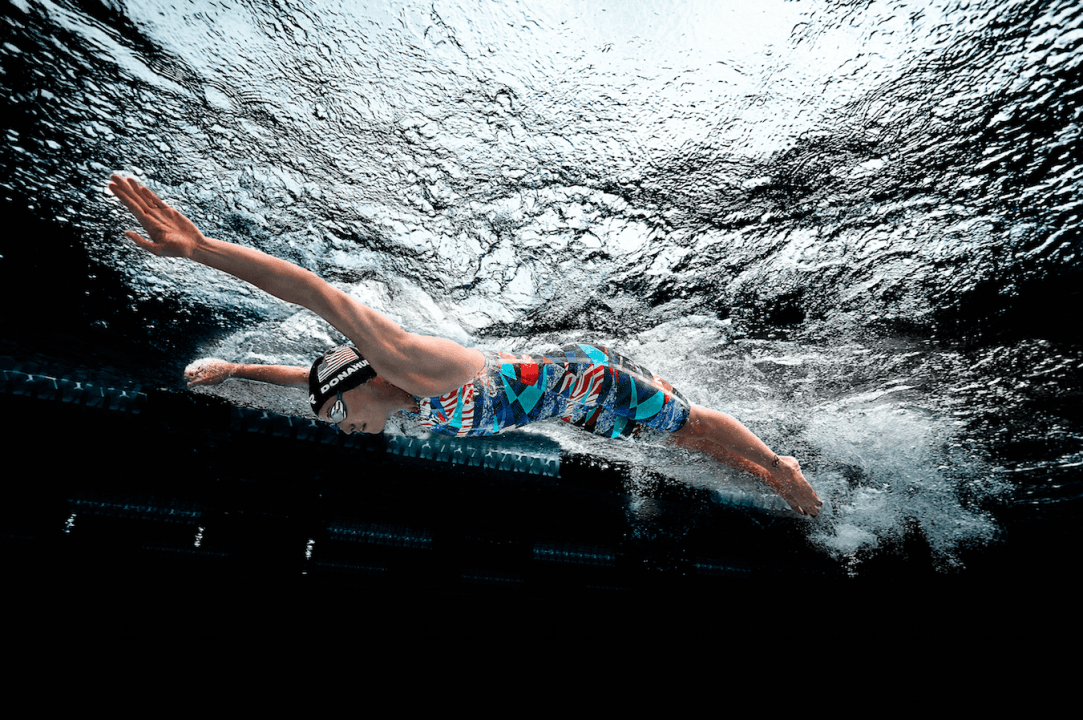 In this FFT15, SwimSwam co-founder Mel Stewart talks with Big 12 Conference Champion, Parker Neri, and  his swim mom, Carolyn Neri.  Mel also checks in with Olympic Champion, World Champion and Fitter and Faster clinician, Claire Donahue. Claire’s a great all-around swimmer, but she famous for being a butterfly specialist. She’s a veteran clinician, instructing kids for the last six year on the Fitter and Faster Swim Tour.

Mel: First of all, congratulations on a great season! It’s quite an accomplishment to win at Big 12 Championships as a Freshman! How was your first year at the University of Texas?

PARKER: Going into my first year at Texas, I was a little intimidated and anxious about training under Eddie and with all the guys on the team. I was still very new to swimming and I knew my times weren’t as fast as many of the guys. I felt a little in over my head at the time, knowing that Texas was one of the best swimming programs in the world. The training took some getting used to and I knew I had no choice but to adapt. One of the first things I realized coming to Texas was that I needed to take full advantage of the opportunity that had been given me. What really pushed me in practice was training alongside some of the fastest athletes on the team and the responsibility I had of representing Texas Swimming in competition. This allowed me to make big strides in the pool, as well as having the experience of winning a national championship with the team. I could not imagine being on any other team and wouldn’t trade this experience for anything. Hook’em Horns!

MEL: What advice would you give a young swimmer with the goal of swimming at Texas?

PARKER: Swimming at Texas, along with many other collegiate swimming programs, requires a great deal of dedication and planning. The sooner an athlete learns how to manage their time effectively, the better. Balancing school, family, friends and swimming is not always easy, but it is a crucial tool if you want to be successful at the next level.

MEL: How did you become a host of the Fitter and Faster Swim Tour?

Our High School Aquatics program was putting on an event to raise funds for the program. I was the Live & Silent Auction chair at the time and reached out to Arluck Promotions with a donation request. David Arluck was very kind and offered to donate several signed memorabilia items from Olympic athletes he represented. He later contacted me about the possibility of having our club host a Fitter & Faster Clinic and that is where our journey began. Upper Arlington Swim Club hosted our first Columbus Fitter and Faster clinic in April of 2010. We went on to host another one in April of 2011 and again in September of 2012.

MEL: What kept you coming back to be a host several years in a row?

CAROLYN: We had an incredible response from the various clubs here in Ohio. The coaches, kids & the parents who attended the clinics were thrilled with the whole experience. This event provided our kids the opportunity to meet, talk to and learn from athletes who had taken this sport to the highest level. Not many kids can say that they have met an Olympic Athlete, raced one or had an opportunity to wear an Olympic medal. The energy and interaction between the athletes and the kids during these events was palpable. The smiles on the kids’ faces, the wonderful athletes and all the positive feedback we received kept us coming back.

MEL: What are some of your favorite memories from Fitter and Faster?

CAROLYN: We had four clinicians attend our first clinic: Mark Gangloff, Megan Jendrick, Josh Schneider and Adam Ritter. The kids practiced drills, raced the athletes and even played sharks & minnows. Several of our High School kids volunteered to help with the event. When it came time to play Sharks & Minnows, David invited the older kids to jump in the pool and join in. My HS daughter Ashley thought she would outsmart the athletes by swimming along the bottom of the pool at the diving well end. She dove to the bottom, went to do a pullout and looked up to see Mark Gangloff standing on the bottom with a big smile, one hand on his hip & the other waving directly at her. Needless to say, she got touched out. She still laughs about this day, not many kids can say they were touched out playing sharks & minnows by an Olympian!

At every clinic we hosted, I always enjoyed watching how upbeat all the athletes were with the kids & parents. Chloe Sutton, Ian Crocker, Josh Schneider, Megan Jendrick, Mark Gangloff, Tyler McGill & Claire Donahue, each of them with their own stories & personalities brought something different to the clinics we hosted. What was not unique was how engaged they all were with the kids, humble, enthusiastic, full of praise & always plenty of high fives to go around.

MEL:  What do you feel is the benefit of swimmers attending Fitter and Faster Swim Clinics?

CAROLYN: Swimming is not an easy sport, long hours looking at a black line, early mornings and countless hours at dryland practices. No doubt working hard is important if you want to be successful. I believe having fun while doing it is just as important and will keep kids in the sport. Fitter & Faster Swim Clinics provide a unique opportunity for kids to do just that. Not all successful athletes have the same journey, it helps kids to meet these athletes and hear their stories. You can see the thrill on the faces of these young athletes as they interact with these accomplished clinicians. I am confident that they leave the clinics inspired and ready to work harder in the pool at their next practice.

MEL: What did you see Parker learning by attending the clinics? How do you feel it may have helped him in his journey?

CAROLYN: Parker’s journey in this sport has not been a straight path. As an age grouper he was not the fastest kid, never making a State cut and entered High School with a 500 FR time over 6 minutes. He wasn’t fond of the early morning long course summer practices and preferred the more relaxed country club swim meets. Between his Sophomore & Junior year Parker decided to focus on water polo and spent a great deal of time that summer in Michigan training with the Rockford Water Polo team. He had a wonderful time and they qualified to compete at Junior Nationals in California. It wasn’t until his Junior year that he saw some considerable time drops in his swimming. A combination of growing six inches, realizing that if he really worked hard and pushed himself in the pool, he could see some nice drops. He had a tremendous amount of support along the way from all his age group and high school coaches. They pushed him when he needed it the most but more importantly believed in him. Parker had to figure this out for himself but having fun experiences associated with swimming is what kept this sport in his life. The Fitter & Faster Clinics provided a perfect opportunity for Parker as a young kid to experience swimming as being fun, key in his journey to ultimately choosing this sport and ending up at the University of Texas!

MEL: You have been doing clinics since 2012 and now some of the swimmers that learned from you are making headlines! How does that feel?

CLAIRE: Some of the kids that have gone to FFT swim clinics are starting to make headlines in the swimming world and it’s amazing. Being a clinician for so long you get to see everything good that’s being done. You see the growth in the swimmers in a matter of a few hours, and it’s truly amazing seeing that dedication to sport come alive over their swimming career.

MEL: What do you hope swimmers take away from your Fitter and Faster swim clinics?

CLAIRE: At these clinics we teach a lot of different techniques and skills. Our biggest hope is that we’re able to share our knowledge and then show them how it should be done, how it should feel, and how to put it all together.

MEL: Do you have any special memories of the impact that you make on swimmers at Fitter and Faster swim clinics?

CLAIRE: The most memorable moments I’ve had at Fitter and Faster are when someone comes up to you throughout the clinic and you see this fire that’s been reignited. The excitement, the joy of swimming, and the desire to learn come flooding back to them. You’d be surprised how often you get to see this happen.

MEL: What advice would you give Parker Neri now that he is approaching his sophmore year at the University of Texas and already has one Big 12 win under his belt?

CLAIRE: The biggest advice I could ever give Parker Neri, now that he’s won a Big 12 Championship, is that if you continue to have the desire for knowledge that you did when you were younger you can only get better. That desire for knowledge will help you and your swimming grow more than you can imagine. Knowledge is Power.

MEL: What are you excited to teach at your upcoming clinics?

CLAIRE: I think I’m most excited about the new knowledge I have to share. I started coaching full time last year, and I’ve learned so much more about the sport of swimming and how it all comes together. I cannot wait to share these new ideas and techniques.

About the Fitter and Faster Swim Tour: The Fitter & Faster Swim Tour produces swim clinics featuring elite stars of the sport and the most innovative teaching platforms. FFT Swim Clinics can be customized to meet age and skill level of every team and community. Call 786-837-6881 or visit http://www.fitterandfaster.com/ to learn more.