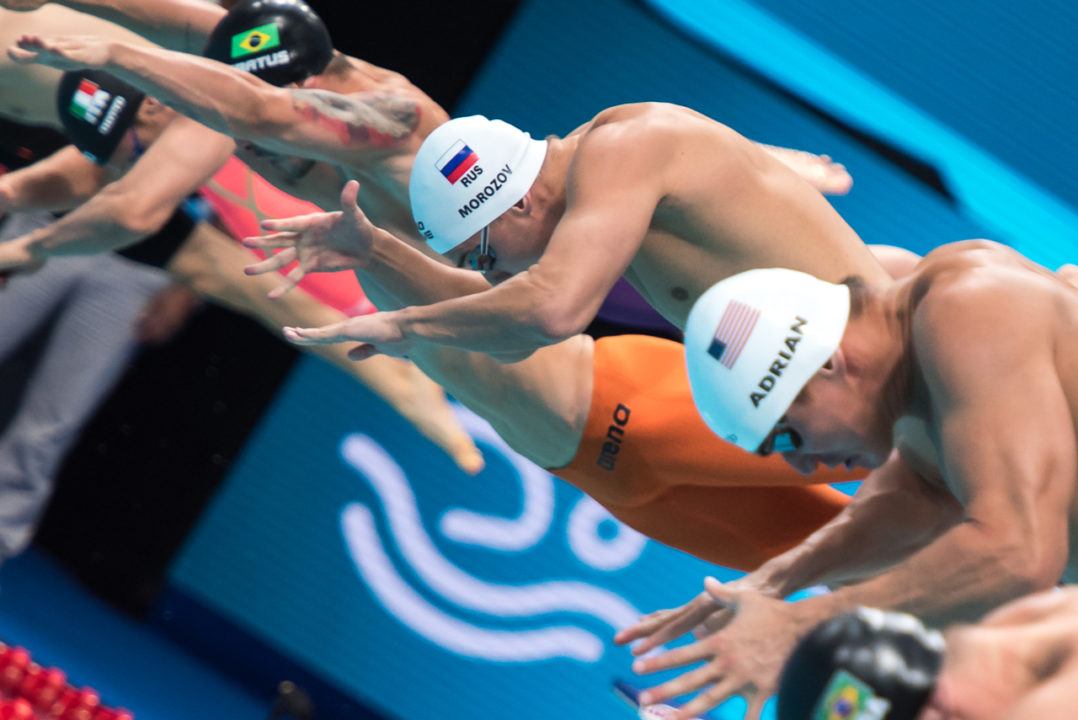 Vlad Morozov was just one of the high-profile athletes in the water this morning getting some racing in before finals tonight in Doha. Archive photo via Peter Sukenik/www.petersukenik.com

Day 1 of the Doha World Cup saw major talent in the form of Sarah Sjostrom, Emily Seebohm, Vlad Morozov and others get their warm-up swims in before tonight’s finals. In this cluster #2, gold medalists from the 2016 Olympic Games, gold and silver medalists from the 2016 Short Course World Championships, as well as any medalist from the 2017 World Championships are eligible to bypass prelims and race directly in tonight’s final. With this in mind, as with other stops, the prelims races don’t spell out how the field will ultimately look once the medalists are placed into the final field.

Nevertheless, spectators were treated to fast swimming this morning on both the men’s and women’s sides, first with Sjostrom producing a solid 200m freestyle swim of 1:56.75. Dutch freestyle ace Femke Heemskerk was also in the water to nab the 2nd fastest time of the morning in 1:58.38.

Hungary’s Iron Lady Katinka Hosszu established herself as the 2nd fastest swimmer in the women’s 50m backstroke. She clocked 27.24 to finish just .08 off of leader Seebohm of Australia, who earned the top spot in 27.16. World record holder Ranomi Kromowidjojo is proving to be a force in this sprint event as the World Cup season rolls on, collecting the 3rd seeded time of the morning in 27.37.

Hosszu easily claimed the prelims title in the women’s 200m IM, where the reigning world record holder notched 2:07.59 for the only mark under the 2:10 threshold this morning.  Next closest was Heemskerk with her result of 2:11.20.

Heemskerk finished her AM program with a 24.88 50m freestyle to produce the only sub-25 second outing of the splash n’ dash field.

For the men, Russian speedster Morozov cranked out the fastest 100m freestyle time, earning 47.46 as the only swimmer under the 48-second threshold on the morning. He followed that up with a 4th place performance in the 100m backstroke with a time of 53.79, before scoring the top mark of the morning in the 100m IM with his result of 53.62.

American Tom Shields warmed up this morning in the 100m IM, clocking 54.89 for 8th in the prelims and making tonight’s final. South African world record holder Cameron Van der Burgh was also in the pool this morning, earning the top mark in the 50m breaststroke with his morning swim of 25.76, just over half a second off his own WR of 25.25 from 2009.

Surprised not many top notch times, except from vdburgh.
If you know you are swimming 3 events at night, why not go all out for one race in the morning and try to chase a WR and FINA points?