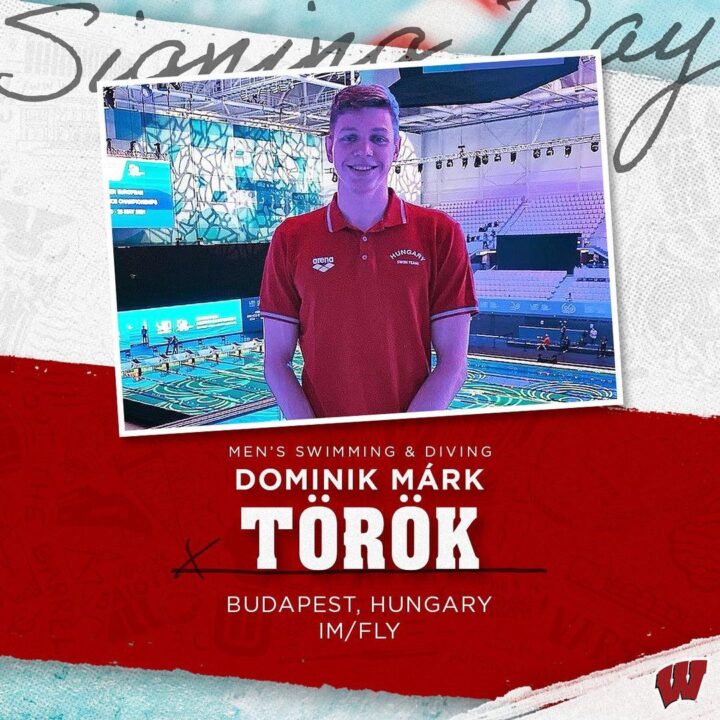 Hungary’s Mark Torok Dominik has committed to Wisconsin for the fall of 2022. Dominik primarily specializes in 200 distances for the butterfly, breaststroke, and IM events.

Dominik swims for Ferencvarosi Torna Club/Hungarian Swimming Federation and has had several experiences traveling within the national team. In 2019, he won a silver medal in the 200 fly (1:58.79) at the European Junior Championships. That time still stands as his personal best, although he came close at this year’s European Championships when he went 1:58.88 to place 23rd out of prelims.

Kristof Milak, who also swims for Hungary and is the current World Record holder, won the event in 1:54.38.

Dominik has also competed at the 2019 World Junior Championships in his hometown of Budapest, Hungary. There, he placed 7th in the 400 IM and didn’t advance to the final in the 200 fly, placing 14th out of prelims. In addition, he’s competed at a handful of FINA World Cup (25m) events.

Dominik lives in Hungary, so he doesn’t have any official Short Course Yards (SCY) times. His best times include:

Since Dominik has no yards data, we’ve converted his best meters times to yards times.

Based on his projected yards times, he’ll arrive to Madison with times that should score at the conference level. Based on last year’s Big Ten Championships, Dominik would’ve A-Finaled in 2 events: 7th in the 400 IM and 5th in the A Final of the 200 fly. In addition, he would’ve scored points via the C Final in the 200 IM. Last season, Wisconsin had no A finalists in the 200 fly.

The University of Wisconsin-Madison is a Division I program that competes out of the Big Ten Conference. Wisconsin placed 5th at the 2021 Men’s Big Ten Championships with 729, only 3 points out of 4th place (Purdue). Yuri Suguiyama, who has a wealth of experience working on-staff with USA Swimming, is in his 4th season as the program’s head coach.