Eugene Godsoe Among 5 Inducted into NC Swimming Hall of Fame 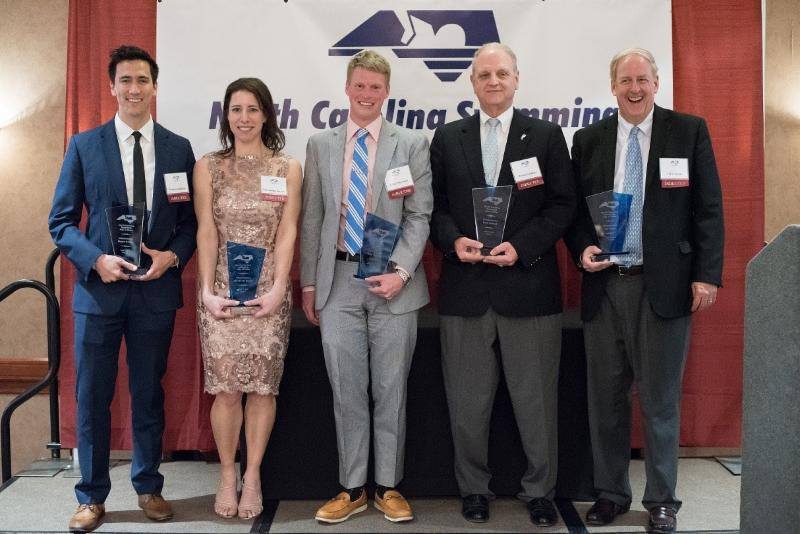 The organization also announced a new capital campaign to install a permanent Hall of Fame exhibit at the Greensboro Aquatic Center, which plays host to many local and national meets

More from the North Carolina Swimming Hall of Fame

Jilen Siroky Bouwer, who now resides in Chicago, grew up in Charlotte, attended Providence High School, and competed as a member of SwimMAC Carolina. By the age of 14 Bouwer won the national championship in the 100 meter breaststroke, was nationally ranked in the 200 and 400 meter individual medleys, was ranked 3rd in the world in the 200 meter breaststroke, and became the youngest of the 650 members of the U.S. Olympic Team in the 1996 Olympic Games in Atlanta.

Morrisville, NC, resident Hill Carrow grew up in Kinston, NC, participated in age group swimming for the Kinston Swim Team, competed in college at the University of North Carolina – Chapel Hill, and went on to excel in the organization and administration of Masters (adult swimming). Carrow founded the Raleigh Area Masters Swim Team; helped launch NC Masters Swimming, one of the US’ largest Masters teams; and has been recognized for his service nationally with U.S. Masters Swimming’s highest award.

Greensboro native and current New York City resident Eugene Godsoe attended Southeast Guilford High where he won eight individual state championships, was All-American all four years, and ranked number one in the U.S. in the 100-yard backstroke. Godsoe became Team Captain at Stanford where he was PAC 10 champion in backstroke and a 15-time All American. Internationally he won silver and bronze medals in the Pan Am Games and won silver in the 50 meter butterfly in the World Aquatics Championships.

Durham resident, Chip Peterson, grew up in Morehead City, NC where he trained in Bogue Sound and became an Open Water specialist. He won gold at the world championships in the 10 kilometer swim at the age of 17! He also won the 1500 meter swim at the U.S. National Championships. Peterson became an ACC Champion in the 1650 freestyle during his college career at UNC-Chapel Hill. He is a Pan Am Games gold medalist and a three-time national champion at the U.S. Open Water Championships.

During the Induction Ceremony, Ceil Blackwell and Erika Braun, Co-Chairs of the NC Swimming Hall of Fame Committee, also announced the capital campaign for the new permanent North Carolina Swimming Hall of Fame display at the Greensboro Aquatic Center (GAC), slated to open in conjunction with the completion of the planned expansion of the GAC in 2019.

Congratulations Chip! (and all the inductees)

According to the googles, Jilen Siroky Bouwer is only 5’3″. She never broke through, but making the Olympics at 14 years old and 5’3″ is impressive enough!