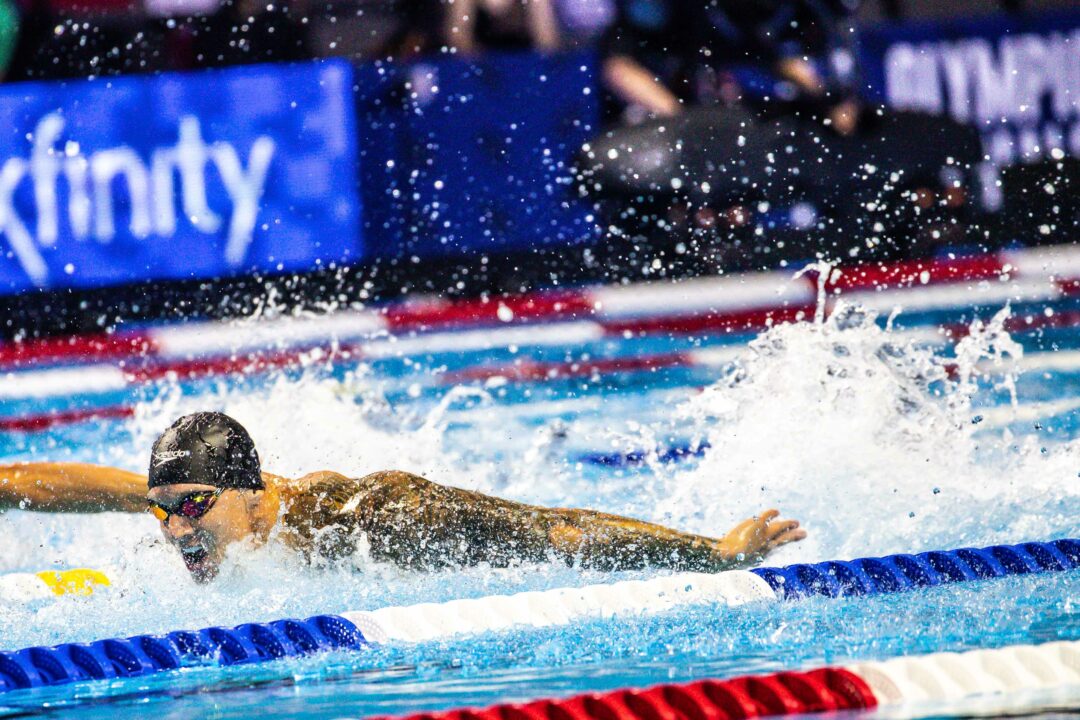 The U.S. has never lost this race at the Olympics, with 14 golds and just one missed due to boycott. But Great Britain's breaststroke advantage still looms. Archive photo via Jack Spitser/Spitser Photography

Breaststroke has long been the weak point for the American men. But Michael Andrew‘s explosive Trials meet could realistically give the U.S. the second-best breaststroker of all the major contenders. Sandwiched between the world record-holders in back (Ryan Murphy) and fly (Caeleb Dressel), Andrew should be set up with clean water and a lead over the unstoppable Brit we’ll get to further down.

Dressel is the top U.S. man in fly and free. We published a much longer examination of the top U.S. relay options, but this foursome seems like the most logical choice for Team USA. If you want to really dive into the weeds, follow that link for all of the major lineup options.

The U.S. has never lost this race at the Olympics – that includes 9 straight Olympic golds stretching back to the boycotted 1980 Olympics, with five consecutive golds prior to that.

Great Britain looked like the best candidates to end that U.S. streak, knocking off the U.S. for World Champs gold in 2019. Adam Peaty is likely to outsplit all other breaststrokers in the field by one to two full seconds. But even with that huge deficit, it took an absurd 46.1 anchor split from Scott to run down the U.S. in 2019. That’s because the U.S. breaststroke woes have often been matched by the British backstroke woes.

Still, the Brits are loaded at the other three legs, and Greenbank is a rising swimmer with upside.

Russia got bit by the Peaty deficit at Euros, leading by 1.5 seconds after backstroke and somehow trailing by two-tenths after breaststroke. They’ve got lots of lineup options, including using Evgeny Rylov on back and Kolesnikov on free, or swapping out Chupkov for the sprintier Kirill Prigoda on breaststroke.

Russia should also swap in Minakov on fly after using Mikhail Vekovishchev there at Euros, and that might be enough to narrow the one-second gap between them and Great Britain at Euros.

Italy was only four-tenths behind Russia at Euros. They’ve got one of the field’s best breaststrokers (Martinenghi was just a half-second slower than Peaty at Euros), and Miressi is an impact anchor. The young Ceccon might be able to carry this team into contention if he can stick with the Murphys and Kolesnikovs of the world on the opening leg.

One more team to note. Australia appears to have a substantial breaststroke hole that might sink the whole ship. But if they can close that margin a little, they’ve got two really big-time legs on the end, including Chalmers, who split 46.6 anchoring this relay at 2019 Worlds.

Host nation Japan should be faster than this aggregate time on breaststroke, a traditional strength. (Yasuhiro Koseki split 58.1 back in 2019).

China has the makings of a dominant front half. Xu Jiayu is as good as any backstroker in the field, and we’ve seen Yan Zibei split 58-low before. It really comes down to the back half.

Team GB will win this to become both the Olympic and World Champions. The USAs Olympic Streak comes to an end very very soon at the hands and feet of the unstoppable Brits!! Hell Yeah!!! Let’s Get It On!!!

Usually a “lock” for the US but, whilst still likely favourites, perhaps a less secure bet than normal.

Barring acts of self destruction, the make-up of the podium (USA, GBR, RUS) looks fairly clear cut. AUS front half (weak breaststroke and inconsistency of Larkin) sinks them by half distance whereas CHN back half looks problematic and JAP lacks “weapons” on any stroke that can make major impacts. If any one is to gatecrash the podium, it may be ITA but that that may be contingent on misfires by one of the 3 favourites.

It’s all about Peaty v Andrews for Gold here. If Andrews can minimise the difference, US gets gold, if Peaty goes off, then GB gets Gold.

trust this: everyone does great in the relays, every1 PBs. Thats how Murphy broke the WR — the atomosohere for relay hits different

World Record incoming. Not a single doubt in my mind.

I am so hyped for this race. This is gonna be epic, so many teams will be close on those last 50 meters.

Wow a team (USA) with two current world record holders in the events they will be swimming in the relay, is not the clear cut favorite! What a time to be alive! That being said… USA for gold